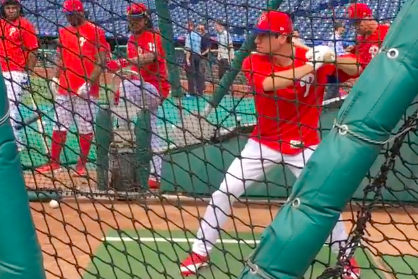 Ten days ago, Adam Haseley was a student-athlete at the University of Virginia sure that his next step would come in professional baseball but unsure when and where that journey would begin.

A week and two days after the Phillies selected him with the eighth-overall pick in Major League Baseball’s draft, Haseley was in major league uniform at Citizens Bank Park for a day. After finalizing his first professional contract in the morning, Haseley hit in a batting practice group with Maikel Franco, Howie Kendrick, Freddy Galvis, and Andrew Knapp in the afternoon.

Haseley will talk to the media in a bit here in South Philly. Until then, feast your eyes on the entirety of his batting practice session.

By the way, Haseley was just a Phillies for a day, of course (or for a pregame batting practice session, really). He is likely to begin his pro career within the next week at either Short-Season Williamsport or Class A Clearwater. Williamsport is probably more likely, although we argued over the weekend why Clearwater might make more sense.