A closer look at Sixers' home loss to the Warriors 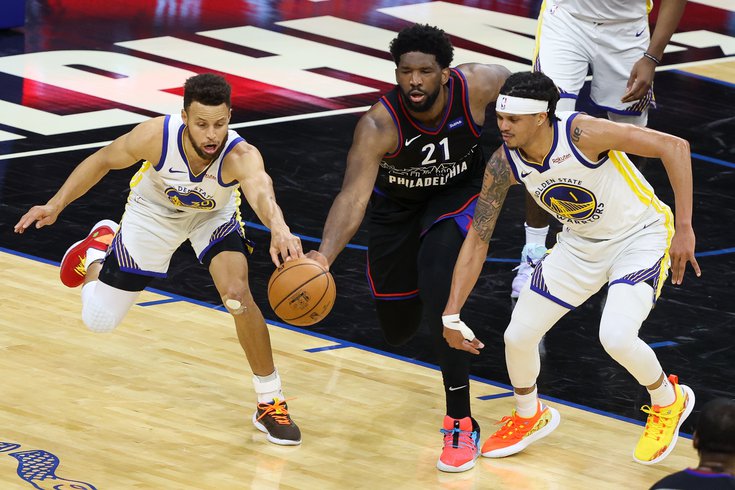 The Warriors had a plan to handle Joel Embiid Monday.

Was Philadelphia's loss to the Golden State Warriors on Monday a product of being shorthanded, going up against Steph Curry, or none of the above? A little bit of everything, Sixers head coach Doc Rivers said after the game, though he seemed to believe the game was lost due primarily to energy and execution.

"Really, we were flat tonight. I didn't feel any energy offensively," Rivers said. "You said before the game they were gonna score 107 points and shoot 44% you probably would have taken it, you know. But when we shoot 39 only have 96 it's hard to win a game in the NBA these days."

Their offensive ineptitude notwithstanding, it did not feel like a "flat" performance from the Sixers in the eyes of this writer. Golden State forced the Sixers to be a version of themselves they were not comfortable or equipped to be, and they also happened to employ one of the greatest weapons of all time in the midst of a scintillating run. It happens.

But since, "It happens!" is hardly a good enough explanation, let's look at what defined the game.

Turning Joel Embiid into a passer

The Warriors made it clear from the opening quarter that they were not going to let Joel Embiid beat them on his own. Facing a combination of Kevon Looney and Draymond Green (at least for most of the game), Embiid was asked to manage a parade of double teams, a fact he wanted to make clear when asked about Green's defensive ability after the game.

"They never guarded me one-on-one. He's a great defender, there's nothing I can take away from him, he's a great one-on-one defender, he's a great team defender," Embiid said after the game. "There were a few times where he was guarding Matisse and they were trying to feed me the ball and they just couldn't, just because of the way we were spaced, and also because of [Draymond's] intelligence...there was one time they actually guarded me one-on-one and that's when he got his fifth foul, but they never did. There's a lot of guys that can get a lot of credit, but when you're going to send double teams every single time when someone has the ball, it doesn't matter how good of a defender you are."

Though it was Thybulle who came up in Embiid's postgame comments, it didn't especially matter who was on the floor and playing the nominal four. Help was sent constantly from the weakside corner, even with a (theoretical) shooter like Mike Scott waiting for the swing pass.

At the start of the season, Embiid earned strong reviews for his improvements against double teams. Those high marks were handed out mostly for the quick, simple reads on his strong side, with Embiid feeling trouble and dumping the ball out quicker than in years past. Monday was one of the better passing games we have seen from Embiid in this year or any other year, though it didn't end up making much difference in the final result.

The skip pass was a big part of Embiid's arsenal on Monday, with the Warriors cheating off of the weakside corner to send help at him for most of the night.

"I just thought I made the right play every single time," Embiid said. "If they're going to guard me like that, I got to trust my teammates and make the right play. A lot of the time, all night they were sending two, three guys at me, and I thought I did a pretty good job of passing it."

Though Embiid would end up with four turnovers on the night, two of those came on plays that had nothing to do with halfcourt offense, with the big fella picking up an offensive foul in transition and a turnover in the backcourt where he threw a pass behind rookie Tyrese Maxey. That doesn't make those plays any more excusable, but it's important to separate the types of turnovers to understand how his night went.

A fair question to ask: if Embiid was passing the ball this well, how could Philadelphia's offense stall out to the extent it did Monday? The simple answer is because that was Philadelphia's only successful offense. Without Ben Simmons, the Sixers had no one who could consistently collapse the paint and find shooters. Without Tobias Harris, they lacked the switch-forcing weapon who could score in isolation on top of punishing Golden State for doubling their best player.

There's no real shame in failing to stop Steph Curry at this moment in time. He's an all-time great in the midst of perhaps the best individual run of his career, and without Simmons in the lineup to help slow him down, the Sixers were always going to have a tough time dealing with the Warriors' No. 1 man.

Here's the strange thing — the Sixers did do a good job on Curry for stretches of this game, so much so that Doc Rivers remarked on the broadcast between the third and fourth quarters that he wasn't necessarily worried about Curry. Famous last words, obviously, with Curry pouring in another 20 points in the final frame to put the game away. But in the early part of the game, they didn't need especially lopsided coverage or strong individual matchups to keep him from going off.

In fact, some of the worst defenders in the rotation were part of the early solution. The Warriors sent handoffs and pick-and-rolls in the direction of guys like Scott and Furkan Korkmaz, and by showing high and not allowing Curry space to step into threes, the Sixers turned him into a playmaker early. That didn't go so well for Curry, who turned the ball over four times in the first quarter alone.

Notably, most of these possessions occurred with Embiid uninvolved in the action. When it came time to try to throw a knockout punch, they chose a different tactic, tempting Philadelphia with a choice: vacate the paint by bringing Embiid up to the level against the screen, or concede open (or at least open-ish) jumpers to Curry in full god mode. Neither is an especially good choice, and Rivers explained why they did not want to do the former during his postgame media session.

"You don't want to push Joel too high. If you've watched Steph, he loves bigs high, he just beats them off the dribble," Rivers said. "We could have did some things, I'm not going to give you my gameplan, but we definitely could have done [something]. And Joel wouldn't have been one of them, because you don't want that."

Perhaps you don't want that, but I doubt Rivers wants to be in the business of Curry launching an all-out assault on his team from deep. The Sixers and Embiid would pivot slightly as Curry began cooking in the fourth quarter, but it was already too late at that point, with Curry happy to bury them regardless of the coverage they settled on. And frankly, the Sixers didn't even execute the scheme they were shooting for late in the game, with Embiid caught on screens and needed switches never coming when they needed to send help.

Moving Embiid higher against pick-and-rolls has been a critical component in Philadelphia's defensive improvement this season, moving them within striking distance of the best unit in the league. Guards are no longer able to get momentum going by stepping into the open looks the Sixers are trying to coax them into taking, and save for some notable exceptions, they've done a good job limiting the damage of perimeter scorers using a combination of individual and team efforts.

But there is room for a small bit of concern when considering how this might impact Philly at the end of games against good teams in the playoffs. They will be fortunate to avoid the Curry buzzsaw in the Eastern Conference playoffs, but there are pull-up shooters galore standing between Philly and a Finals appearance. Embiid is going to have to play the most inspired defense of his career as he ramps up to an even bigger workload/minutes load during the postseason. Asking Embiid to anchor the offense and cover from the rim to the three-point line on defense is a huge ask that will inevitably wear on him. And it's more than just a physical demand — Embiid's mental sharpness as the communicator on the back end needs to be the best of his career, toggling different calls depending on what he sees approaching the screen.

Something to keep in mind as the Sixers head down the stretch. The teams standing between Philly and a title will be much more talented than this Warriors bunch.