Do the Sixers really still have the second best chances to win the NBA Finals?

And why Game 5 will likely decide the entire series against the Hawks... 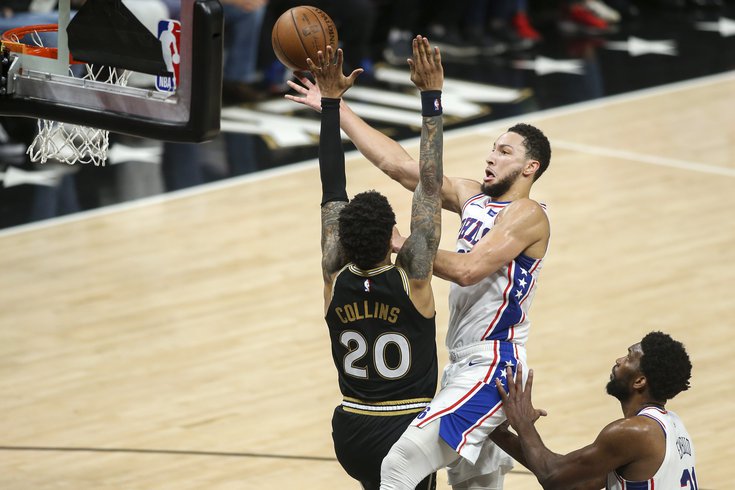 The team that took the floor for the second half of Monday's eventful Game 4 did not look like a serious NBA Finals contender. The defense was sloppy, the offense was sloppier and Joel Embiid went 0-for-12 from the field in the last 24 minutes as the Sixers lost by three in a game they led by as many as 18 points.

But the Sixers don't play in a vacuum. The landscape of the NBA's Elite Eight has completely changed as injuries to Kyrie Irving and James Harden have the Nets' future in doubt, and less-than-stellar play from the Bucks in their series against the depleted Nets has them looking just as lost as the Sixers as times.

And, over in the West, the usual suspects are no longer vying for a title as the Suns (after knocking out the Nuggets) are the only team not mired in a tied 2-2 series. Is there really any doubt that a full strength Sixers squad could handle a lot of these teams?

Over at fivethirtyeight.com they seem to agree with this premise. Of the eight teams remaining in the postseason, the analytics site believes the Sixers are the second best team remaining, as currently constructed. Even after Game 4, and with Embiid's injured knee clearly impacting him, the site gives Philly a 70% chance of winning two of its next three games against Atlanta, a 37% chance of making the Finals and 17% chance of winning it all. Those percentages are the second best of any team, behind Phoenix.

Another sports-obsessed website laying odds is TheRinger.com, which gives the Sixers a slightly less optimistic 60% chance of advancing past the Hawks in the second round. According to their number crunching, Philadelphia has a 27% chance of winning both of the next two games and a 33% chance of winning the series in seven games. They are also listed with a 33% chance of making it to the Finals, trailing the Bucks in the East by two percentage points.

Interestingly, sportsbooks seem not to be as on board with the Sixers. Though they hold a -5 point advantage heading into Game 5 in Philly across the board, their NBA Finals odds remain the sixth best of the eight teams, via Pickswise. BetMGM and FanDuel have them at +1400 with DraftKings at +1000. Perhaps this is the time to buy low, if you really believe in the Sixers to make a deep run.

Oddsmakers still have the Sixers behind the Nets and Bucks when it comes to winning the Eastern Conference.

Game 5 will tip off around 8:30 p.m. on Wednesday and there will be a lot riding on its result.

In 198 Game 5's with NBA series' tied at 2-2, the Game 5 winner has gone on to clinch the series 82.8% of the time. In addition, there may never be a better opportunity for the Sixers to win a title, possibly ever. With Irving and Harden momentarily sidelined, LeBron James out of the mix and holding home court advantage, it could be now or never for the Sixers to make good on 'The Process' once and for all.