Digging deeper on what P.J. Tucker brings the Sixers 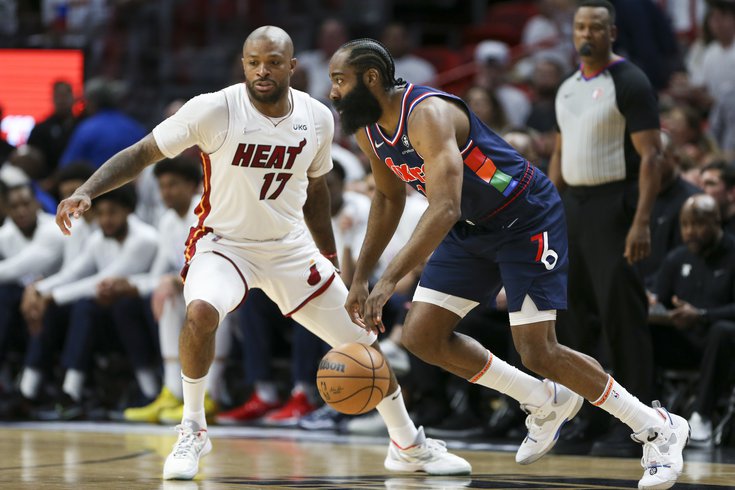 What are the Sixers getting in wily veteran P.J. Tucker?

If you somehow don't have an idea of who P.J. Tucker is at this point in his career, I'm slightly confused at how you ended up reading about a mid-level player signing for a Sixers team that hasn't made it past the second round of the playoffs in over 20 years. You are dedicated enough to care about Sixers-related things in the middle of July, yet not quite enough to recognize one of the most experienced vets in the league. Quite a mystery.

It would also mean you fell into a coma during Philadelphia's second-round loss this past spring, and truthfully, that probably would have been a good thing. In many ways, Heat-Sixers showed what Philadelphia lacked in comparison to a sturdier franchise, and as Joel Embiid explained during his exit interview, Tucker was the embodiment of what they've lacked for his entire tenure in Philly.

That soapbox moment, it should be said, was followed by some behind-the-scenes reminders from Embiid that this was a guy worth getting. Though Embiid is happy to remind everyone he's "not a GM," he is well aware (and perhaps even too aware) of how much influence his voice has. When the big guy speaks up, everybody listens. And this time, they ended up getting one of the men he wanted by his side.

Tucker has had quite a basketball journey. After a productive college run at Texas, playing alongside the likes of LaMarcus Aldridge, Royal Ivey, and Booby Gibson, Tucker was drafted in the second round and ultimately lost his roster spot on the Toronto Raptors at the tail end of the 2006-07 season. That kicked off a five-year stretch where Tucker carved out a living playing overseas basketball — he won Finals MVP awards in two different countries (Germany and Israel) while playing for teams in Israel, Ukraine, Greece, Italy, and Germany from 2007-12.

We could tell a long, flowery story about how that journey changed Tucker, who once resorted to eating several Snickers bars as a means to avoid eating goulash while he was abroad. But the core of who Tucker is, the fire that drives him, that has been within Tucker as far back as we have reliable information on his life and career. And that was embodied in a moment shared by a former Sixers player, JJ Redick.

As the story goes, Tucker's Texas Longhorns met Redick's Duke Blue Devils in December 2005, with Redick ultimately having one of his best-ever games in a Duke rout. And despite having a career night in a high-profile meeting, one of the enduring memories Redick has passed on from that game was how Tucker carried himself in a game the Longhorns got waxed in.

"He wasn't really guarding me for most of the game," Redick said on his podcast, The Old Man and the Three. "For some reason, toward the end of the game, it was already a blowout and he starts guarding me. And he's doing the P.J. stuff. Not letting me cut, he's cutting me off, he's shoving me, he's talking to me. I grabbed a rebound, he's tickling me, I don't know, all of this weird shit. And it was apparent he was trying to get under my skin, obviously he was frustrated I don't hold it against [him]. I don't remember exactly how the story goes, but I got fouled, I had 39, we were up 30, and he's yapping at me at the free throw line. And like as I'm shooting my free throw, I said something to him. I think what I said was, P.J., I've got 40 and you're down 30, why the f**k are you talking?"

In so many words, Tucker is a professional pain in the ass. And his reputation as a tough guy isn't unearned, like some NBA players who love to talk within the relatively safe confines of an NBA game. In the Game 7 his Rockets lost to the Warriors in 2018 — the 2018 team many people seem upset Daryl Morey is borrowing from — Tucker played 45 minutes after having to undergo three root canals on cracked teeth that were damaged in Game 6 of the same series. Early in his return to the NBA while playing for the Phoenix Suns, Tucker developed a reputation for toughing it out in order to be available for the team, even though that Suns outfit was middling for most of that run. He was there to set a tone one way or another.

That's the first place where we have to pause and wonder whether that mentality will work against Tucker's value in a Sixers uniform. Tucker's desire and ability to play through bumps and bruises throughout his career is admirable, as is his ability to actually be useful to the team in those moments. He has appeared in 70-plus games for his teams in nine of his last 10 years in the NBA, 80-plus games in five of those years. The big question for Tucker as he begins this new contract in Philadelphia is whether that pattern can hold for a 37, 38, and 39-year-old Tucker over the next three seasons. The players who tend to remain effective deep into their 30s tend to be stars who either reinvent themselves by leaning on superior skill or athletic outliers who remain plus-athletes even as they move further from their peaks. Tucker doesn't fit in either of those categories.

It should be said, however, that Tucker needed to reinvent himself to simply last long enough to become a Sixers player. Tucker being even an occasional three-point shooter would have been written off as fantasy when he was in college, playing during an era where the midrange was still supreme. In three years at Texas, he took a grand total of four three-point attempts. By the time he joined Morey/James Harden's Rockets in 2017, he had turned himself into at least a passable three-point shooter, but he really began to establish his legacy on those Houston teams. Just ask Draymond Green:

Tuck may be the best Corner 3 point shooter in NBA history...

There's something to that notion. Tucker was the NBA's leader in corner threes made in 2017-18, 2018-19, and 2019-20, finishing eighth in that category last season. His accuracy has been strong during those years, with Tucker shooting 38 percent or better from in all of those years. Critically, Tucker has also repeatedly signed up to play that role as a guy supporting ball-dominant, shot-heavy stars across multiple stops now. You don't buy back into the Harden (and Joel Embiid) experience if your previous time with Harden, or Giannis Antetokounmpo, or Jimmy Butler has you upset about needing to stand in the corner and launch when called upon.

And that's exactly what will happen in Philadelphia. Whether it's a Harden/Embiid pick-and-roll in the middle of the floor or an Embiid post-up that draws a double, Tucker will be waiting in his spot, teams knowing he can (and often will) punish them if they lose track of him. Sixers fans have grown accustomed to the opposite problem, opponents feeling empowered to leave many of their wing players alone on the perimeter and junking up the middle of the floor as a result.

Tucker was less reliant on the three-ball last season, finding a bit of additional utility as an off-ball cutter and mover within Miami's offense, and his big frame makes him a useful piece as a screener as well. But I would temper your expectations for him in terms of offensive versatility, with Tucker's career-long numbers telling the story. Last year's jump in field goal percentage aside, his value will come primarily through spacing, and in occasionally mixing it up for offensive rebounds.

The other end of the floor is where Tucker stands to help Philadelphia the most. He has earned strong reviews for his on-ball defense to the point that he has (whether true or not) earned labels like "LeBron stopper," indicators that he can hang with the best of the best. While those on-ball chops matter, particularly within the context of a playoff run, Tucker's defensive value can't be summed up via matchup stats from NBA.com. It's the little things all over the floor — dig downs on post-ups, sliding into position as the low man, quick hands to swat a ball away from a driver, and a combination of timing and strength that allows him to stand players up and stop them from getting where they desire.

Tucker's greatest defensive strength likely lies in knowing exactly how, where, and when to do something on defense, even if he has to cheat away from a useful offensive player to do so. He is not afraid to cheat ever-so-slightly away from dangerous offensive players on the perimeter, putting himself in the best spot to help a teammate and/or cause a turnover without leaving his man golden opportunities to score. When Tucker comes to crowd your space, he often manages to do so before you realize it's happening, leaving you mostly powerless to avoid a mistake.

It's that sort of savvy that makes you think he might continue to be a productive player on competitive teams in the years to come. The Sixers have been woefully short on tough, high IQ defenders, and adding a player like Tucker solves some of those problems.

Tucker's smarts and strength will likely also be used to throw more exotic lineups on the floor in Philadelphia next season. My understanding is that the Sixers are comfortable with the idea of Tucker playing some situational minutes at the five, something he is certainly strong enough to do even if he lacks rim-protecting height. The Sixers have juiced up their rotation in a way that should allow them to be a switch-heavy defensive team with Embiid out of the game, and when you combine that with De'Anthony Melton's defensive versatility across the 1-3 spots, they have opportunities to throw lots of gadget looks at teams if they want to.

The question is ultimately just how large of a role you can depend on Tucker to play, and how they manage him and his minutes will be scrutinized further with each passing season. Overtaxing Tucker prior to the playoffs, either through minutes count or the specificity of his role, would undercut the reason you've paid him a hefty chunk of change to come here in his late 30s. A balancing act has to be found between simply playing a valuable guy who fits well and giving him the best chance to maintain this level of play across the full three years. A proactive approach still might not be enough to fight off Father Time or simple bad luck, though that is a possibility they have ultimately decided to live with.

The best-case scenario is that Tucker simply maintains his current level of play for the duration of his contract, serving as connective tissue for a team with very good top-end talent. His teammates have consistently raved about the experience of having Tucker on board, and while he can't pass his aforementioned pain tolerance on to Sixers players, his tendency to lead by example should ultimately make them a more resilient team, mentally and physically.

Could the wheels fall off? Of course. There aren't many success stories for role players being asked to play critical minutes this deep in their careers. We're talking about a player who was in the same draft class as Paul Millsap, who Sixers fans learned had nothing left to give even in spot minutes last season. Time will tell if Morey made a smart bet on an outlier among his peers.