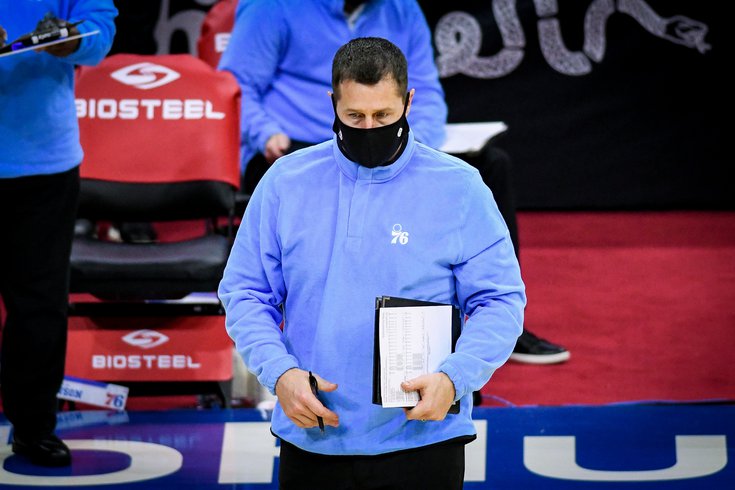 Sixers assistant coach Dave Joerger, one of Doc Rivers' top assistants on the bench over the last two seasons, is expected to step away from the team temporarily as he undergoes cancer treatment, as first reported by ESPN's Adrian Wojnarowski.

Here's the word from Woj, who reported Saturday night that Joerger delivered the news to the full team following the game against Indiana:

Joerger, 47, has undergone treatments while coaching for the past two weeks -- missing only one road game -- but the Sixers' extended road trip requires him to step away and stay back for treatments in Philadelphia, he said.

Joerger told the Sixers players, assistant coaches and staff of his cancer in a post-game meeting on Saturday night in Indiana. He had already told a small group of Sixers officials -- including coach Doc Rivers, President of Basketball Operations Daryl Morey and owner Josh Harris -- of his recent diagnoses. Joerger, who says he has Stage 1 cancer, described his prognosis prior to Saturday's game in a visit on an upcoming edition of ESPN's "The Woj Pod" podcast.

"We have caught it early," Joerger told ESPN. "I'm very lucky. I've got over a 90 percent chance of cure rate, but it's very scary and it's not enjoyable going through. ...I can't go on the road and do radiation and chemotherapy in different cities around the country. To continue my treatment, I need to step away from the team."  [ESPN]

That last bit is obviously a great bit of news for Joerger, at least within the scope of receiving that sort of diagnosis. Catching this early as a result of knowing his body and immediately seeking a doctor's opinion appears to be the message he wants to send to the public, which is something we can all take to heart, especially as we live through a public health crisis that has changed many times over the last 20 months or so.

MORE: Sixers drop fourth-straight due to poor defense vs. Pacers

In a statement released by the Sixers on Saturday night, Joerger had more to say about the decision to step away, and took time to thank the doctors who have worked with him during this turbulent time, in addition to the higher-ups in the organization who were made aware of his prognosis:

Over the last few months, I learned the importance of self-evaluation and care, early detection and annual medical exams. I know I will beat this diagnosis with the help of my world-class medical team at the Sidney Kimmel Cancer Center - Jefferson Health, under the direction of Dr. David M. Cognetti, Dr. Voichita Bar Ad and Dr. Jennifer Johnson. I would like to thank the entire medical team and support staff at Jefferson Health for their extraordinary care. I would also like to acknowledge Josh Harris, David Blitzer, Doc Rivers, Daryl Morey, Elton Brand and the entire 76ers organization. Their unwavering support has allowed me to concentrate all of my efforts towards beating cancer. Most importantly, thank you to my wife Kimberly and my loving family who continue to provide me with strength.

The game of basketball has given me so much, highlighted by the extended support system and lifelong friendships I have been able to form. I look forward to using my platform to continue to raise awareness and help support the fight against cancer.

Joerger, who was hired quickly after Rivers was named Philly's new head coach last season, was brought to Philadelphia primarily for his offensive expertise and versatility as a thinker. With the Sixers getting off to an elite start to the year on the offensive end of the floor, there's no doubt Joerger's presence will be missed, though the team is understandably more focused on Joerger simply getting healthy and taking care of himself right now.

"Dave is not only one of the most talented and respected coaches in the NBA, but he’s a great friend, colleague, husband and father," Doc Rivers said in a statement. "The same positivity, enthusiasm and grit that have made him a successful coach will also carry him through his fight against cancer. I know I speak for everyone at the 76ers when I say, “Get well soon, we love you and we’ll be with you throughout this entire process. Your battle is our battle.”"

"Since he arrived in Philadelphia last year, Dave has been more than a great coach. He’s a well-respected leader who has become a trusted member of the 76ers family," Joshua Harris added. "He has our full support as he focuses on his health. We know he’ll approach the coming months with the same determination that has made him one of the NBA’s top coaches, and we’ll be by his side every step of the way.

Here's to a speedy recovery for Joerger.