Can the Sixers push for a top-two seed? Comparing schedules with their competition 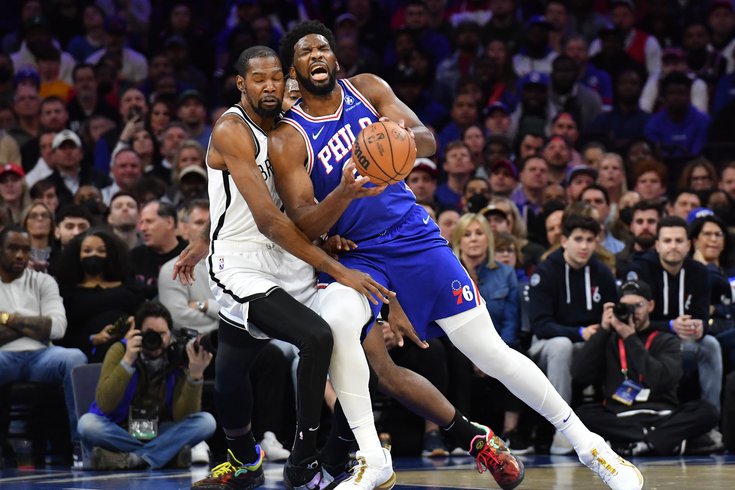 Will the Sixers be among the top two teams in the East this spring?

It's mid-January, and the 2-5 seeds in the Eastern Conference are separated by a single game in the standings. Save for the Cleveland Cavaliers, each of those teams has a player with a case for the MVP award, and as the "worst" leading man of the bunch, Donovan Mitchell is putting together an All-NBA type of year. Competition for the right to play at home for the first two rounds of the playoffs will be fierce, and the Sixers are right in the thick of that battle, trailing the second-place Bucks by just half of a game.

As we're now in the second half of the season, it's worth taking stock of the battle for second place, as it could end up being decisive in a playoff series later this spring. We'll start with Philadelphia, obviously, and then move our way through the rest of the competition.

One must-have game in here vs. Houston, but nothing easy otherwise. Four games against MVP candidates (including two against Boston), and the Sixers are fortunate to at least get six of these at home. March is also a brutal month for Philadelphia that we've been talking about all year, with the Sixers playing a handful of back-to-backs and 12 road games, though it looks a little less daunting than it did to start the season because of the form of some of their opponents.

Before the year ends, they have three meetings with Boston, two with Denver (currently first in the West), two against the Bucks, three against Brooklyn, and two against Cleveland. It gives them a brutal road heading into the playoffs, but it will put the power in their hands to swing seeding in one direction or another.

Can Joel Embiid stay healthy? Will James Harden sustain his recent level of play? Is Tyrese Maxey happy with being the sixth man? Can P.J. Tucker return to form? Will Doc Rivers cause Philadelphia fans to actively hate a team on pace to win 52 games? All fair questions to ask as we look at the rest of the season for Philly.

Philadelphia's strength of schedule doesn't have to be bad news for them, as they've handled good teams relatively well after sputtering out of the gate to start the year. You could make the argument that they'll be more "playoff ready" out of the chute because they end the year needing to play at a pretty high level on a nightly basis. But you shouldn't need more than the opening game of the first round, if that, to get in the mindset to win playoff games. The real problem with their closing schedule is that it leaves them with little margin for error if/when they hit adversity, whether that's injury-related, chemistry-related, or otherwise.

The Sixers deserve a ton of credit for (mostly) taking care of business against a soft schedule and managing shorthanded games well up to this point. Of this group, they have the star who is currently in the best run of form, with Giannis and Durant injured and Mitchell not quite at Embiid's nightly level, with due respect to that bonkers 71-point outing. They're also deeper than they've been in the past despite disappointing seasons for 2/3 of their major off-season acquisitions. Still, this is a brutal road ahead.

There aren't many sustained runs of tough games for the Bucks left, leaving us with this upcoming stretch. The Hornets are the only real walkover game on the schedule, and the question is exactly who the Bucks have available for that one, with Giannis nursing injuries and Khris Middleton a big ol' mystery up to this point in the season.

I think we're sort of taking for granted that Middleton is going to return to the lineup and be the guy they need him to be in order to look like a real-deal contender. Brook Lopez being a defensive lynchpin has helped a ton, but Middleton has played seven games this year as of this writing, last making an appearance for Milwaukee on December 15th. Though the Bucks have fewer concerns about chemistry building because of the shared history Middleton has with their best players, they're well off-the-pace on offense this season, stuck with the 23rd-best unit in the league this year. Is that turning around and leaping back toward the top-10, even top-15 unit they need to compete with the best of the best? I'm not so sure.

Middleton looks on the verge of returning, having been assigned to the Bucks' G-League affiliate this week. But knowing they have shared history to fall back on, the Bucks could simply decide they'd rather protect Middleton rather than push him the rest of the season. They called his injury "day-to-day" on Christmas Eve.

And that's without mentioning the lingering knee issue keeping Giannis out of the lineup right now!

On paper, not the toughest schedule in the world, as the Suns are a bit of a mess, the Pistons stink, the Wizards are the Wizards, you get the idea. But I'm going to make the argument that regardless of the opponent, the next 10 games are Brooklyn's toughest 10 games simply because Kevin Durant is out of the lineup and injuries are piling up elsewhere.

Brooklyn dropped a game to the Spurs on Tuesday without Durant and Kyrie Irving in the lineup, which shows they can't be assumed to beat anyone while shorthanded. Until Durant is back, they're going to struggle. They're going to catch the Sixers at home next week at the end of a five-game road trip, with the Sixers getting three days off prior to that meeting, and the crowd almost certainly revved up for the first Embiid vs. Simmons showdown in Philly since the latter left. Good luck.

Kevin Durant is currently hurt, Kyrie Irving is a constant threat to send his team off of the rails, Ben Simmons is both dealing with back issues and still passing up shots at the rim... I mean, come on, there's still high disaster potential here, right?

Nic Claxton has become one of the most versatile and impactful defenders in the league, playing a large part in Brooklyn's rise to a top-10 defensive season, yet you could make the argument he and Simmons shouldn't touch the floor together. Okay, that's actually too strong — those lineups essentially need Durant on the floor to have any shot at success, and that complicates things for substitution patterns if you're starting all three of those guys. Brooklyn's most played lineup, Simmons/Irving/O'Neale/Durant/Claxton, is winning by about 3.1 points per 100 possessions, 50th percentile per Cleaning the Glass, but they're below-average on offense, which should be borderline impossible for any team with KD and Kyrie. I'll be interested to see if KD can continue dragging the multiple non-shooter lineups to success because signs of doom are lurking. The Nets have a 0th percentile offense (not a misprint) with Simmons + Claxton on the floor and Durant off of it, and a 1st percentile offense in all lineups with Simmons that don't include Durant.

I've moved off of my "don't take the Nets seriously" stance a bit because Durant has been in god mode when healthy, but they're still shaky.

Six road games in this run, four games against MVP candidates, and four days in Miami at the start of March. It's hard for teams to sweep these "miniseries" battles during the season, but man, if there was ever a scenario where I'd pick the home team to roll, it's one where a young team goes to South Beach for an extended stay during the regular season. No notorious partiers in that Cavs crew, but come on, the temptation is staggering.

Cleveland is aided in this stretch by a break between the first two games on this list, with the Sixers matchup coming right before the All-Star break. A good one to send both teams off, so I'm looking forward to that one.

I suppose asking, "Is Cleveland good enough?" is not really an X factor, and I think that question is actually unfair to them, so let's go with, "Are the Cavs ready to win?" Donovan Mitchell sure is, but the spine of this team is very, very young. Jarrett Allen is a certified old head at 24, with Darius Garland (23 on January 26th) and Evan Mobley (21) completing the young foundation for Cleveland.

Youth can cut both ways, though I lean toward it being an asset to end the regular season. With Ben Simmons leading the way in 2018, the Sixers pulverized a soft schedule in the final months of 2017-18, racking up wins and closing the season on a long winning streak. Youthful legs at the end of the 82-game slog are a big asset, and the Cavs already have the credentials of a sneaky playoff threat (they own the league's second-best defense and are just outside the top-10 in scoring).

If seeding is at all close to end the season, nobody has a better chance to gun for No. 2 than Cleveland, Which ends the season with two games against the Magic and a date with the Charlotte Hornets to wrap it all up. Do not sleep on this group, even if I have my doubts about them in a seven-game format.