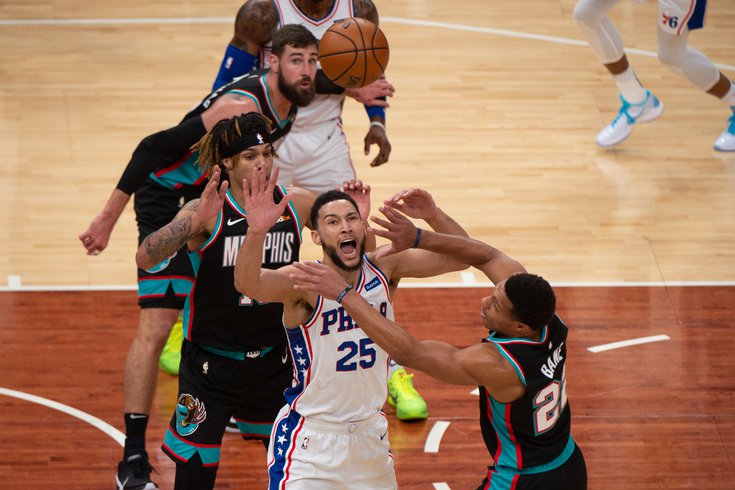 Philadelphia 76ers guard Ben Simmons and Memphis Grizzlies guard Desmond Bane fight for the ball during the first half.

The Sixers fought the Grizzlies down to the wire on Saturday night, but they came up short in a 106-104 road loss on the front end of a back-to-back.

• One of the most encouraging things you could say about Shake Milton so far this season is that he has been able to play an effective sixth man despite his outside touch evading him at times. Milton has been an elite outside shooter dating back to his amateur days, and that's where a lot of his value has come from prior to this season.

With time and seasoning, Milton has tightened up the rest. He's had tighter control with his handle this season, aided by some additional strength/weight he put on during the offseason, which helps him keep defenders on his hip and finish around the basket. The touch has always been there and Milton has long enough arms to score around people, and now you're starting to see him tie all of that together.

It was Milton, not Ben Simmons or Tobias Harris, who did his best to try to keep the Sixers from plunging into the abyss in the second half. With nothing really working and sharing the ball leading to nothing but turnovers, Milton went on a personal scoring run to open the fourth quarter that gave them one last chance to get back into the game.

The Grizzlies were so spooked that they started trapping him when he crossed halfcourt, and Milton pulled off a few slick moves to evade the pressure, including one clean split that led to free-throws. And the usually soft-spoken Milton was even vocal coming out of timeouts, trying to lead his teammates with both his actions and his words.

From the moment camp opened this year, Doc Rivers has had a message for his first guard off of the bench: "Let Shake be Shake." It has given him an abundance of confidence, and while the Sixers didn't pull out a win, they are in the process of watching a major breakout from one of their young guys.

• Consider me a true believer in the Tyrese Maxey floater/runner package at this point. I still think there may be a point where he has to be coached into getting closer to the rim more often so that he's regularly getting to the free-throw line, but if you can connect on those in-between looks at an elite clip, it's probably best not to mess with what you're doing too much.

Simply looking to score instead of getting caught in the turnover vortex allowed Maxey to stand out from some of his teammates on Saturday. I admit that's a low bar, but you guys all watched the same game I did. A shot attempt out of Maxey's hands is better than a turnover going the other way, and fostering his aggression should be a team goal this year.

Maxey and Milton are the best guard combo the Sixers have had off of the bench in a long time, and while Seth Curry deserves his spot in the starting lineup, I think it's fair to wonder if one of these guys should take Danny Green's spot in the starting lineup sooner than later. They'll still have overlapping minutes, and it spreads the dynamism throughout the rotation (on top of giving you a solid vet off of the bench).

• Isaiah Joe taking a charge from Xavier Tillman is probably the bravest thing I've seen the rookie do so far in his career. Can't question the kid's desire to compete and put it on the line for his team.

• Matisse Thybulle was very good off the bench on Saturday night, with his fouls coming on calls I think were questionable at best and his overall positioning as good as it has been all year.

• I don't have to tell you all this if you sat through the Process era, but you're simply not going to beat NBA teams if the turnover margin is as bad as it was for Philadelphia on Saturday night. The Sixers turned the ball over with unmatched creativity, on the spectrum from "kicking the ball in the backcourt" to "Dwight Howard attempting to run a pick-and-roll."

Hanging around in this one is an indictment of Memphis' ability to cash in on the turnover more than it is a testament to anything Philadelphia did.

• There was a stretch in the second quarter where Ben Simmons played with more offensive purpose than we have seen from him pretty much all season. A couple of the fouls he forced Memphis to take were in transition, something he has never struggled with, but he made it a point to keep challenging the Grizzlies with physicality on offense, a welcome sight after his worst start to a game all season.

Unfortunately, there was still that start to the game and the rest of the game for that matter. Simmons just feels like a less decisive player this season, getting 3/4 of the way through plays he has comfortably pulled off in the past and is suddenly reluctant to attempt. It's even more confusing because of that second-quarter stretch.

It is within him to attack and impose his will on the game. It's not a departure from how he generally tries to play. But he doesn't do it, choosing most often to cycle the ball out to the perimeter instead. Defenses are anticipating this now, and they're turning Simmons over with more frequency than ever before.

Already averaging a career-high 3.9 turnovers per game coming into the night, Simmons coughed up five more by halftime on a wide variety of plays, many on mid-air passes, a coach's worst nightmare. He rarely even had the chance to do so down the stretch, with the ball (rightfully) put into the hands of Shake Milton. This was one of the most important possessions of the game, and he just pissed it away.

He was played out of the game almost entirely in the second half. It was quite a contrast to Embiid's response against an undermanned Heat team earlier in the week — Simmons just sort of let the game go by him and his team in the final 24 minutes, and that was a wrap for Philly.

• The Sixers simply needed more from Tobias Harris on Saturday night. He got off to a decent start, leaking out in transition and punishing Memphis for missed shots and early turnovers, looking like the guy who has come to live under Doc Rivers this season. Simmons was a part of that nice start, with hit-ahead passes that found Harris in stride and simplified his decisionmaking.

Unfortunately, the well ran dry, and as the Grizzlies increasingly walled off the paint and forced the Sixers to beat them with something more creative than a basic middle pick-and-roll. In practice, that meant Harris was asked to create from a standstill on a lot of meandering and/or broken possessions. That was a recipe for disaster.

Harris did his best to take over the game down the stretch, shrugging off the brutality of the middle quarters to come up with some big buckets in the mid-post to give them a chance to win it. Unforuntately, he stepped out of bounds on the pivotal possession of the game, forced to the baseline before ever getting a shot up.

• Danny Green is at the point in his career where he's not going to have it on some nights and there will be nothing you can really do about it. This felt like one of those games, with Green behind the pace and reaching for air throughout the evening.

Keeping in mind the chaos of the past week, it's pretty understandable that he'd have a night like this against a young team with plenty of pep in their step. But they're going to need him to establish some sort of defensive baseline over the course of this season if he's to be one of their reliable vets come playoff time.

• While we're on the subject of Green, the Sixers ran an almost unfathomable number of pick-and-rolls with Green and Dwight Howard as the combination at the center of the action. Even one of those plays is probably too many, and it should surprise no one that it ended with several turnovers, goofy shot attempts, and generally uninspiring basketball.

I get that Philadelphia has had a really tough stretch to open the year for a team under a new coach, with COVID and injuries messing up their rotation and ability to build out the playbook. But this looked like a team that had never stepped foot on the floor together before Saturday night's game. No real excuse for this level of sloppiness.

(A note on Howard: you are seeing the difference between a guy who is a good backup and a guy who can handle a starter-sized role. Howard obviously was more than up to the task early in his career, but asking him to be the man in the middle for most of 48 minutes is asking a lot.)

• When Joel Embiid has been on the floor, the Sixers have looked like a markedly different team than last year, in large part because of how he has taken advantage of the changing personnel around him. When Ben Simmons has been on the floor without Embiid, very little looks different from last season in spite of how different the team is and the presence of an entirely new coaching staff.

To be clear, that hasn't meant it always looks good with Embiid on the floor. The Sixers played a clunker of a game with Simmons unavailable and Joel Embiid on the floor against Atlanta this week. But even if just through the systemic changes, there should have been a noticeable difference for the team this season.

You can decide for yourself why that is.

• You had to know this shot was going to be placed here.

We’re gonna say that this was a great pass from Ben Simmons. pic.twitter.com/R6Yb7LXiJx

Again, in the interest of fairness, I will never criticize anyone for taking an open three, and good on him for finally doing what people have been asking for all this time. But boy, that was a rough one in that spot.