Artist Dhwani Saraiya is making superheroes of the 76ers this season 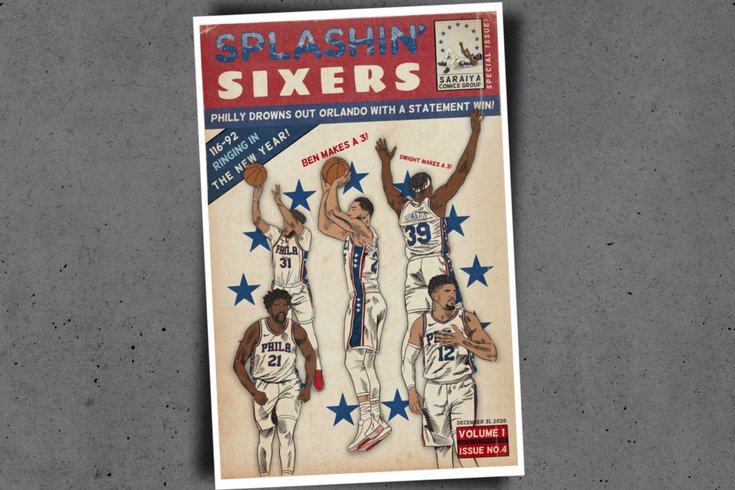 Illustrator Dhwani Saraiya captures the hearts of Philadelphia 76ers fans with her comic-book-style drawings following each victory for the team. The 22-year-old Edison, New Jersey native hopes her ambitious project will lead to a career making creative content for a professional sports team.

The rabid fandom surrounding Philadelphia sports is as developed and far-reaching as anything you'd expect from the legions of people devoted to Harry Potter, Star Wars or "Game of Thrones."

As tough as it is must be for some athletes to endure the scrutiny of this city, the flip side is that the love and creativity around fan support are simply unmatched in the sports world.

One of those fans is Dhwani Saraiya, a 22-year-old illustrator from Edison, New Jersey.

Since the beginning of the NBA season in December, Saraiya has quickly become a legend among Philly sports fans with her project to draw a new comic book cover for every Sixers win this year.

"It's kind of insane to see how much it's blown up," said Saraiya, who shares her work on her Instagram and Twitter pages, as well as on the Sixers subreddit.

"I guess I started out drawing superheroes," Saraiya told PhillyVoice. "I would draw Spider-Man or Iron Man from old comics that I collected. I have a bunch of comics from the 60s and 70s. I love the way they look. They have those half-tone patterns and specific fonts and colors."

Around her sophomore year of college, Saraiya fell in love with the Sixers, taking a particular shine to Ben Simmons and later to Matisse Thybulle. Her drawings of athletes, both pencil and digital art, date as far back as late 2019.

But as Saraiya refined her technique in the digital realm, she began to think more broadly about something she could do to interact with the Sixers community.

"I thought this would be a really interesting way to showcase players," Saraiya said. "A lot of people make highlight videos and hype videos. They'll make graphics that look really cool. I thought, 'This could be something different, so let me try it.'"

After each Sixers victory, Saraiya will pull up a Getty Images photo, or something the team tweets out, to use as a reference.

"I usually try to find a picture that reflects the biggest moment within the game," Saraiya said, adding that now fans often send her requests and suggestions.

Each cover is like a colorful, digital thesis statement, encapsulating that specific game. It could be a role player who leaps into action at a key moment or it could be the stuff of legend – think Allen Iverson stepping over Tyronn Lue, Dr. J dunking from the freethrow line or Joel Embiid shimmying after sinking a circus shot while being fouled.

From a technical standpoint, Saraiya uploads her reference picture to Photoshop, using gridlines to help her recreate them to perfection. The drawings are done on her iPad using Procreate, which enables her to create templates for some of the comic book elements.

Even so, most covers take her anywhere from two to four days to complete.

And for a winning team that has championship aspirations, that means Saraiya's going to be busy.

Saraiya graduated from Rutgers University last year — right into a pandemic. In a challenging job market, she's decided to lean into this Sixers project.

In the meantime, Saraiya has opened up an Etsy shop and Redbubble shop where she sells her illustrations. She recently asked her supporters what kind of demand there might be for a coffee table book that compiles her Sixers work along with other sketches and inspirational drawings. The response was positive.

"That's definitely something I'm thinking about," Saraiya said. "I think it would be really cool to see all of them in one compilation."

Along with Sadie Smith, the 15-year-old Sixers Piano Girl who plays "Here Come the Sixers" to celebrate wins, Saraiya has helped build a community around the new-look Sixers under Coach Doc Rivers. The heroism of the comic-book style art only adds to the lore of their quest for a title.

Saraiya's newest art, based on Tuesday's overtime victory against the Miami Heat, riffs on early MVP-candidate Joel Embiid's "They Hate The Process" slogan, a reference to NBA commissioner Adam Silver's shenanigans, which have plagued the Sixers through a bout of COVID-19 exposure.

You can support Saraiya's work at her Etsy shop and Redbubble shop.