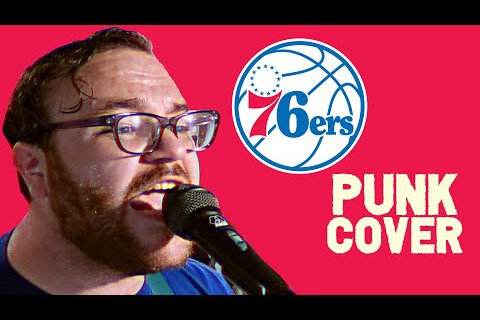 The Philadelphia 76ers theme song, "Here Come the SIxers," has received the punk cover treatment from South Philadelphia band Longfriend Timefriend. It is a magnificent rendition of the disco classic.

Few songs have the power to instantly lift a mood like the infectious "Here Come the Sixers," the 1975 jingle resurrected in recent years to celebrate home wins by Philly's beloved NBA team.

As a form of musical tribute, the "punk cover" is perhaps the highest compliment a song can receive. Bands like MxPx, Lagwagon and Yellowcard paved the way for these speedy, ultra-harmonized tributes to become a tradition of the genre.

But could it work with "Here Come the Sixers," a disco-themed groove suited more to "Soul Train" than a mosh pit? Hell yes, it can and does.

South Philly-based Longfriend Timefriend, a four-piece with roots in '90s and early-oughts pop punk, have delivered the hard-charging punk cover this song was destined to become.

The band, which formed last December, is comprised of Mike McMahon (vocals and guitar), Pete Imbesi (Drums), Louie Fantini (bass) and Caleb Delp (keys and backup vocals). They've all been active in the music scene and played in Philly area bands for years.

The idea for the cover surfaced when Longfriend Timefriend launched a Kickstarter to raise money to record their debut album.

Among the rewards for backing the project was the chance to recommend a cover, and a consensus naturally emerged around "Here Come the Sixers."

"We had a lot of fun working on it," McMahon said. "Three out of four of us are already huge fans of the Sixers, and the one guy who isn't a Sixers fan is a huge fan of the song."

It took the band two practices and three takes — mostly with a live room microphone — to capture the sound they wanted. They added a couple breakdowns and a few editing touches, such as the vocal harmonies and a tambourine, to help make the song extra crispy.

Outside of their cover, Longfriend Timefriend's sound is reminiscent of "Dude Ranch"-era Blink-182 or "Problematic"-era All, with Rancid-style organ sounds mixed in for a lighter touch. Their first single, "Mount Saint Helens," was released at the beginning of June.

The band had hoped to perform live sets prior to the coronavirus pandemic ruining everything, but they've since shifted their focus to recording. The Kickstarter has already raised more than $3,000 to fund the project, which will be recorded with help from Headroom Studios producer Kyle Pulley, the band said.

Whereas past crowdfunding projects have taken a consistent push to raise money, Longfriend Timefriend seems to have found pretty instant backing, partly because of the band members' collective past exploits. The upcoming album's theme, they hinted, will be the sheer absurdity of the year 2020.

The story behind "Here Come the Sixers," recounted a few years ago by The New York Times, is a doozy in its own right.

In 1975, the Sixers were looking to inject some energy into The Spectrum. On the cheap, they turned to Randy Childress, a student and part-time employee who was working odd jobs for the team.

Childress got together with a few of his musical friends and pieced together "Here Come the Sixers" on a four-track player. Its catchy, simple lyrics were inspired by an episode of "Sesame Street," Childress said.

Longfriend Timefriend has high hopes for the Sixers when the NBA season restarts in the Disney Bubble at the beginning of August. The band is elated that point guard Shake Milton will enter the starting lineup, Ben Simmons will move to power forward and Al Horford will come off the bench.

Considering the Sixers once had teen phenom Brandon "Taz" Niederauer perform the "Star-Spangled Banner" and "Here Come the Sixers" at the Wells Fargo Center, maybe Longfriend Timefriend could hit center court one day for a rendition of the punk cover. It would be the perfect energy to bring whenever the team can resume playing home games in front of fans in South Philadelphia.

"The ball is in the Sixers' court," said bassist Fantini. "They have our number."