The Sixers forward had one simple message during his media availability on Monday... 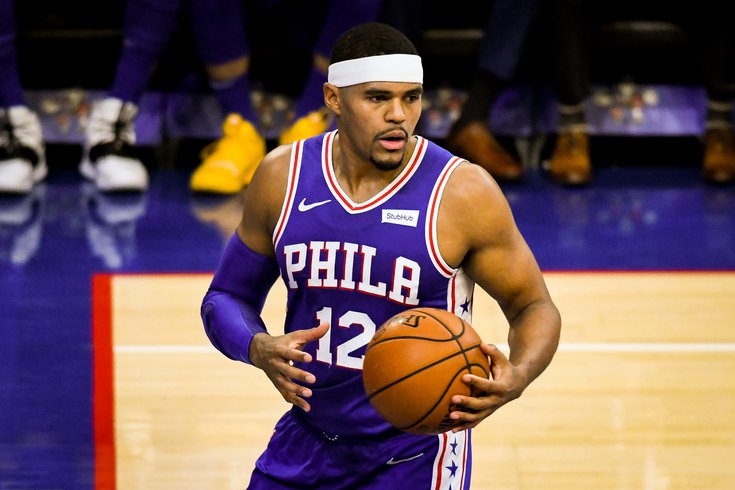 Over the weekend, plans were formalized by the NBPA to design shirts for the Orlando restart featuring social justice messages selected by the players. Led by Russell Westbrook, the initiative was meant to include messaging the league did not approve for use on the back of players' jersey.

As the vocal leader and connector on the Sixers, Tobias Harris was given first crack to weigh in on that move on Monday afternoon. Philadelphia's forward took the conversation in a different direction.

"Nothing against the t-shirts, but we want to make sure that [Kentucky attorney general] Daniel Cameron arrests the cops and the officers involved with Breonna Taylor's death," Harris said Monday. "And yeah, that's all I got to say."

"That's going to be my answer for every question. For Daniel Cameron to step up to do what's right. And that's the only message I got today. Appreciate everybody. Thanks."

With that, just one question into his availability, Harris departed. Message sent.

The death of Ms. Taylor has been a source of great angst nationwide, but especially in Louisville, Kentucky, where the 26-year-old EMT was killed in her home by three plainclothes Lousville Metro Police Department officers serving a no-knock search warrant. The three officers — Jonathan Mattingly, Brett Hankison, and Myles Cosgrove — engaged in a shootout with Taylor's boyfriend, Kenneth Walker, a licensed gun owner whose lawyer told police he believed their apartment was being broken into.

Taylor was shot eight times and LMPD fired 20+ shots into the residence, with local outlets reporting in mid-May that some of those shots came from an officer shooting through closed blinds from outside of the apartment. This would go on to be confirmed by LMPD when Hankinson was fired from his job and removed from the Louisville Police Merit Board, with interim chief Robert Schroder writing that he was "alarmed and stunned [Hankinson] used deadly force in this fashion."

Dispatch logs obtained by the Louisville Courier-Journal show no officer attempted to seek medical assistance for Taylor until at least 20 minutes after she was fatally shot. Walker told police hours after the shooting that Taylor was still alive and coughing for several minutes following the shootout, though the Jefferson Country coroner disputed this possibility, suggesting she likely died "within a minute" of being shot.

The shooting, which happened on March 13th, has garnered significant attention in the months since as a result of local protests and the nationwide unrest over police brutality that escalated following the highly-publicized death of George Floyd in Minnesota. To this point, none of the three officers involved in the shootout have been charged, and that fact has been repeated daily to the point of becoming a somewhat-controversial meme.

Bringing attention to causes like this one has been a goal of Harris' since before the team left for Orlando, with the veteran forward organizing teamwide conversations on how they can use their platform to bring about change. The message from Harris has centered around doing something they can all own together as a collective.

"We are definitely brainstorming on a lot of ideas to make real impact and real change and to do something that we know we’re going to be proud of at the end of the day, continue to push this message and keep it going. That’s on myself and teammates to gather up, huddle together, and come up with a gameplan on some initiatives we’re going to back," Harris said following Philadelphia's first practice in Orlando.

Basketball is the focus for Philadelphia in Orlando, but even the refuge of the court has been used to have open conversations about tough issues facing the country. Following the death of former Congressman John Lewis, a Civil Rights icon who passed away over the weekend, head coach Brett Brown opened Saturday's practice with a discussion centered around Lewis' life and influence.

While the players have yet to make any announcements regarding formal social justice plans, the existence of these conversations have been held up as a universal positive by members of the team, who believe it has contributed to the improved chemistry they hope to build for the Orlando restart. But when the message does come, expect it to come from Harris' mouth.

"We're taking it amongst ourselves to talk as men a little bit better, a little bit more, just be vulnerable and open with each other," Glenn Robinson III said Monday. "We're kind of leaning on Tobias right now, we're going to come together as a team and figure out where to go forward and what we're going to do for the city of Philadelphia, come together with everything that's going on right now."

"We want to decide as a team, why are we here and what are we playing for besides a championship? We're also playing for our community and things that are happening in the world. I think it'll be a pretty big statement, and hopefully it's coming from Tobias soon."