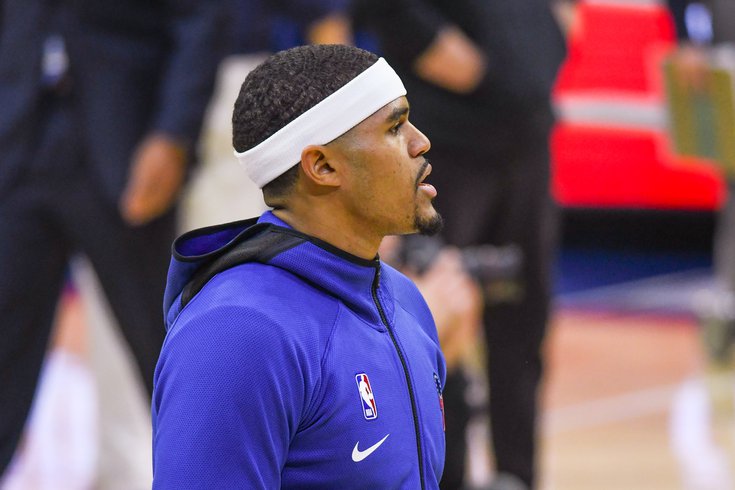 Unprompted, one Sixers player's name continued to come up throughout interviews with players prior to their departure for Orlando. Not because they were putting in insane workouts at the gym, not because they claimed to have added muscle on their frame, and not because they suddenly had a clean bill of health after a four-month hiatus.

Over and over again, Tobias Harris' name came up for a different reason: leadership. With the world in disarray and players locked down in their homes, there was still work to be done.

Harris, according to teammates, set up a group DM on Instagram, organized Zoom calls with the players (some of which turned into happy hours), and took it upon himself to connect a talented but troubled team. It has made an impression.

"I think that from where I came in for just the three weeks that I was here, we are way more connected," Glenn Robinson III, who joined the team at the trade deadline, told reporters last week.

All of Philadelphia's top-end talent — it seems worth mentioning they still have several of the biggest contributors from a team that pushed last year's champion Raptors closest to the brink — has not amounted to much on the court this season. Mired in sixth place in the Eastern Conference, they have gone from sexy preseason Finals pick to the league's biggest disappointment. A sensational home record has been offset by miserable effort after miserable effort on the road.

The games are all neutral site in Orlando, but questions remain about how the Sixers will respond to that environment. Figuring out the basketball portion of the equation was downright impossible under the circumstances of the last few months, and several Sixers players (including Joel Embiid) have arrived in Orlando with reservations about the decision to restart at all. With the state of Florida and surging positive tests as the backdrop, it could all collapse at any moment anyway.

For Harris, bringing the team together during the lockdown period was an essential part of rectifying issues from the pre-COVID world, regardless of where things go from here. Control what you can control, and more importantly, look out for one another.

"I think it’s just always important to make sure our guys mentally are in the right space. So just being a teammate, a brother — and we’re around each other for so long — so when we go into quarantine with the pandemic we had, I thought it was really important to keep us in the loop with one another, what we’re doing," Harris told reporters from Orlando on Saturday. "I also looked at it like, if we’re being honest, we didn’t have the best chemistry through the year with everything going on. So just to use the time to kind of build on that chemistry and help us grow a little bit together through the whole pandemic."

"It was a time for us to really communicate with one another and get to know each other a little bit more than we may have before. I definitely think it’s a positive. Just having constant communication and being able to reach other was key...we really took this time to try to get ourselves and our mindset going to be ready."

Finding Philadelphia's true leader was always a subject of some curiosity. Joel Embiid is their best player, but he is a natural introvert, despite the Twitter theatrics and occasional spicy quotes. Ben Simmons controls the offense as the point guard, but JJ Redick famously referred to him as "the man behind the glass," rarely revealing his emotions or his deepest feelings. Josh Richardson has not been shy about speaking up about problems, residue from his time in a tough Miami Heat organization, but if we are comparing contracts and commitments, his long-term future in Philadelphia is less certain.

Harris, too, isn't the slam-dunk "captain" people usually envision. As a player, he often struggles to find the middle ground between aggression and fitting in, the rare scorer whose conscience can get the best of him. But he is a measured speaker, values communication, and leads by example on and off the court.

His participation in the protests stemming from George Floyd's death is the most high-profile example from quarantine. Walking the streets with Matisse Thybulle, who has called the vet a "big brother" that allows him to feel more comfortable with his own activism, Harris lent both his words and his physical presence to a sweeping American movement.

This, too, is something he is interested in translating to Orlando with the help of his teammates.

MORE: What will Sixers' rotation look like in Orlando?

"We are definitely brainstorming on a lot of ideas to make real impact and real change and to do something that we know we’re going to be proud of at the end of the day, continue to push this message and keep it going. That’s on myself and teammates to gather up, huddle together, and come up with a gameplan on some initiatives we’re going to back," Harris said Saturday.

Not every Zoom call during quarantine was a happy hour or a light affair. Harris says members of the team jumped on an "inspiring" call with Michael Eric Dyson, a Georgetown professor who has written extensively on Black history and Black issues in America, in an effort to best educate themselves on historic precedent and lessons they could carry with them in the fight against injustice.

As athletes, most will measure Harris and his Sixers teammates by their championship pursuit. Expectations may have been adjusted since the preseason, but few are interested in hearing excuses for one of the more talented (and expensive) teams in the league failing to put it all together. The issues as they were in mid-March — ill-fitting parts, poor spacing, a coach reluctant to make changes that could offset these problems — continue to loom over the team.

Improved chemistry, then, is perhaps their best shot to offset or mask those issues in time to do real damage in the playoffs. It has been an uphill battle for most of the season, and as most of us have learned during quarantine, Zoom calls aren't a substitute for real life. As Harris admits, nothing is certain, but it certainly can't hurt.

"I think we will see how it translates," Harris said. "But at the same time, it’s no mystery that the teams with the best chemistry usually end up being some of the teams that are the toughest to beat. It’s not rocket science.