Conflicted Joel Embiid says he 'hated' NBA restart idea: 'Basketball is not all that matters' 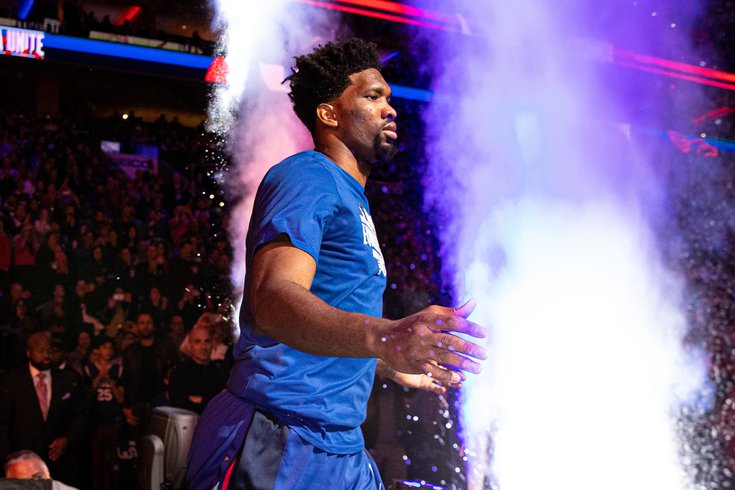 When Joel Embiid speaks, everyone in the Sixers' orbit listens. There have been few quips and quotes to parse through from the big fella during the COVID-19 pandemic, save for the message he sent with a sizable donation to relief efforts, but he returned Tuesday afternoon to speak with reporters for the first time since the NBA suspended the season.

Turns out, he had plenty to say about an NBA restart plan that he has little confidence in.

"I hated the idea. I feel like, with everything going on, it’s unfortunate what’s been going on in the world. Obviously, people look at it a different way, there might be some other reasons behind everything going on," Embiid told reporters Tuesday. "But to me, that part never matters to me, all I want to be is, you know, stay healthy, and stay safe, keep the people around me safe. I want to make sure I’m going to live for a long time and not have any sort of, I don’t know, consequences in the future."

"I’m not a big fan of the idea, but then again, I’m going to do my job. I’m not going to let the city down. I’m going to go represent my city — that’s what I’ve always done — my family, and my teammates. So you just gotta, the mindset doesn’t change."

He is not the first and won't be the last Sixers player to express doubt about the NBA's restart. Other teammates, including Mike Scott on Monday morning, have been open about their uncertainty in the process, in spite of the time and energy the league has spent on returning.

Embiid, though, is the first to give voice to a concern that is prevalent in many around the country in these uncertain times. Confident in his own actions and his own approach to the quarantine, he is less certain that his peers will take it seriously enough to preserve the environment and allow them to carry on without unnecessary risk.

"It doesn’t matter the fact that I don’t like that idea, and I still don’t believe in it, and I don’t think it’s going to be safe. I know I’m going to do the right things," Embiid said. "I don’t ever do anything, I only play video games, I’m always home, I don’t do anything. But then again I don’t trust those other guys to do the same. But like I said, I got to do my job.”

"I’ve been doing this for quite a bit now. Five, six, seven years, and I look at myself, and like I said all I do is play video games and stay in my room on the road. Even when I’m home, just stay home, play video games, do what I gotta do. Just be with my family and obviously we are all different. There’s some guys [that] like to go out, there's some guys [that] like to do stuff, there’s some guys that like adventure, so that’s the way I’m thinking. I know myself, I know I’m not going to put everybody else at risk, but the question is, ‘Is everybody else going to do the same?’ And I surely, just being around this business, I surely don’t think so."

Embiid's participation in the restart at all appears to rest on what he feels is his responsibility to other people. He told reporters Tuesday that he considered opting out of the restart, but his sense of duty and the core of his personality wouldn't allow him to back out. Philadelphia's toughness, he says, is something he tries to carry with him, both in the way he plays (bullying his way to the free-throw line, defending the rim) and the way he carries himself generally.

That is the part of Embiid that other members of the organization have attested to during the lockdown period. Head coach Brett Brown lauded the work ethic of his franchise center during a Zoom call a week prior, and guard Josh Richardson recently spoke up about Embiid's presence in the gym and physical fitness, which Richardson claims have both been great in spite of the circumstances.

The problems that most people have considered as fatal for this Sixers team? Embiid doesn't necessarily see them that way. He repeated his season-long assertion that they were built for the playoffs, dismissed concerns regarding his partnership with Al Horford in the frontcourt, and gave a full-throated endorsement of Ben Simmons' competitiveness heading toward the playoffs.

"We’re going to need him, I know," Embiid said. "It’s a team game. I’m going to do my best to keep helping him and create some space for him, and we all got to do the same thing just to help each other. At the end of the day, it’s all about winning a championship, and I feel like he has the right mindset, that’s what he wants to do. I know one thing about him, he wants to win, and he’s going to do what it takes to win."

Even self-assessed problems Embiid has pointed out throughout the year (vocally, on a few occasions) are things he feels he can control. Embiid's play was beginning to take off in the period before the league closed down, the malaise of the regular season giving way to a more inspired Embiid. This, he says, is within his control, and any lingering confusion over how he was being used in the offense should not exist at this stage.

"That should not even be a question," Embiid said. "I know I’m capable of carrying the team, so it’s all about me being assertive. If I feel like I’m not getting the ball, I just got to talk to them and do what I have to do. But at the end of the day, I should never be in a position to complain about getting the ball, just because of who I am. I believe I can carry the team, and I believe being able to do that, I just got to take matters into my own hands. And obviously, I need to be in positions where I feel comfortable, and I believe my teammates are going to help."

That just leaves the league's handling of a societal issue that has spun out of control in America in a manner unique from a global perspective. The very state the league will restart in has been bombarded with positive cases over the past couple of weeks, setting record highs for new daily cases. And that's without considering the state of Disney World itself — Disney employees assigned to the bubble were already known to have less-stringent testing than NBA personnel, and Disney union reps say the broader workforce won't be tested prior to returning to work, opening the door for further complications.

It leaves NBA players in a difficult spot. Can you focus the proper amount of energy on chasing a championship with no fans in the building, anxiety over the setting, confined to one area for months at a time? We're all going to find out soon enough. Until then, Philadelphia's franchise player appears trapped between two worlds: valuing Joel Embiid the person while considering the duties of Joel Embiid the teammate.

"If you told me that if the current trend was that people getting sick and a lot of people are dying, obviously you don’t know what is going to happen and you don’t want to be in a situation where you put your life at risk and all that stuff just for, what, the money and all that stuff? At the end of the day, basketball is not all that matters," Embiid said. "I got family, I got myself to look out for, so that’s all I care about. When it’s all said and done, basketball shouldn’t define me. I should be looked at as Joel Embiid the person."

"But I want to represent my city. I’ve been here too long, and this is my opportunity. I feel like we have a great chance. I believe we have a great chance of winning the championship. Still not 100 percent sure but that’s what I’m thinking. I want to represent the city, I don’t want to let my teammates down, I don’t want to let anybody down, and I’ve been working too hard for this so I just got to keep pushing and hope for the best."