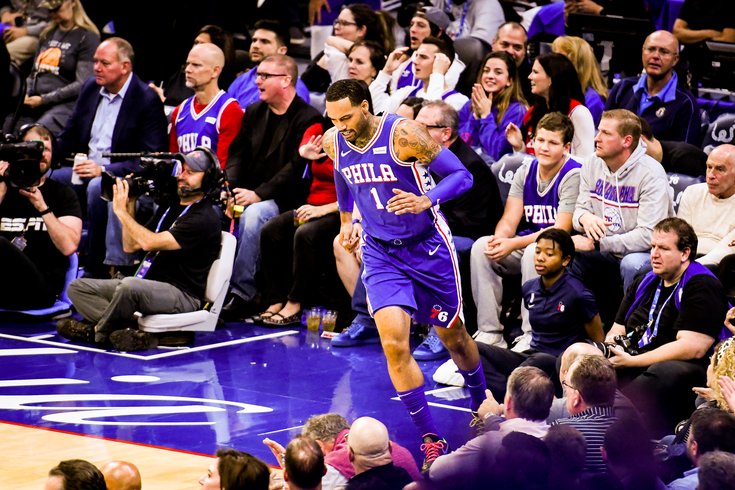 Mike Scott is typically the guy you turn to when you want a no-nonsense quote about the event of the night — an in-game fight, a huge late-game shot, or an uninspired performance he won't make excuses for. Monday morning, he was frank on another subject, criticizing the NBA's list of approved "activist" messages players can wear on the backs of their jerseys during the NBA restart.

"They gave us some names and phrases to put on the back of jerseys, that was terrible. It was just a bad miss, a bad choice. They didn't give players a chance to voice our opinions on it; they just gave us a list to pick from. So that was bad, that was terrible," Scott said. "I'm all about just doing, instead of saying and posting, or putting something on the back of your jersey. I don't think that's going to stop anything, you know?"

According to reporting from ESPN/The Undefeated's Marc Spears, players will have a list of 29 phrases they can choose to put on the back of their jerseys, should they choose: Black Lives Matter; Say Their Names; Vote; I Can't Breathe; Justice; Peace; Equality; Freedom; Enough; Power to the People; Justice Now; Say Her Name; Sí Se Puede (Yes We Can); Liberation; See Us; Hear Us; Respect Us; Love Us; Listen; Listen to Us; Stand Up; Ally; Anti-Racist; I Am A Man; Speak Up; How Many More; Group Economics; Education Reform; and Mentor.

The league and the NBA Players Association came to an agreement on the jersey statements over the weekend, but exactly who had input on the deal and the list in question is presently unclear.

That quote tied into the overarching theme of Scott's Zoom call with reporters, as the veteran role player seeks to find some level of normalcy in an unusual situation. Scott, who told reporters anger was his dominant emotion over the past two months, says centering his mentality on basketball again has been a difficult task in these circumstances.

"You're trying to change your mentality from what's going on and being with your family and making sure you're safe, racism, corona[virus], and then turning and switching on to go to Orlando and play basketball. Easier said than done," Scott admitted. "Most people would probably be like, this shit should be easy, just think about basketball. But I don't know man, it's tough thinking about that after what's gone on these past couple months. I've been dealing with that and just trying to work out every day and get my mind ready for Orlando, but at the same time, how can you not focus on everything else going on?"

"We're just going off of, 'we'll see.' Can only go off of what people are saying, explaining what it's going to be like down there, and giving us ideas of what's to come...I don't know anything until I get down there and see."

Under these circumstances, certain Sixers players have taken it upon themselves to keep their teammates connected and focused on the road ahead. Scott joined other teammates in praising Tobias Harris for his vocal leadership during their extended layoff, days after Glenn Robinson III named Harris as a galvanizing force for the Sixers.

"A lot of dialogue with teammates, coaches, especially with Tobias [Harris], he's been keeping us together. Me and him have been talking, man, like every day about what's going on in the world. There's just a lot of frustration," Scott said. "He's been great, he's been keeping us together, setting up Zoom meetings with people to speak with, and any questions anyone has with what's going on right now...he's really taken his leadership role to another level."

It goes beyond Harris, of course. Head coach Brett Brown noted late last week that the vast majority of their conversations lately had been about world news and protests and racial justice rather than basketball, the real world being more important than the game they will all gather to play in early August.

And Scott had the chance to weigh in on another matter of some significance on Monday morning: the Washington professional football team potentially changing their team name. Major sponsors put pressure on owner Daniel Snyder last week over their controversial name, and a formal review is allegedly underway.

Scott, a Virginia native who got in a dust-up at an Eagles tailgate last season, says he's all for it.

"They've been trying to change the name, I'm all for that, change it," Scott said. "Change the owner, you know what I'm saying?"