With basketball on hold, Sixers' focus has turned to racial injustice 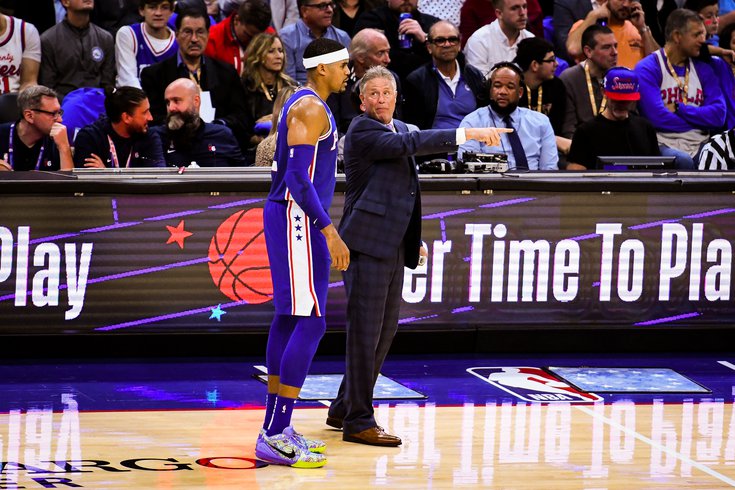 "On May 24th, George Floyd was murdered," Sixers head coach Brett Brown said on Wednesday afternoon. "All of a sudden, everybody starts to pay attention in a hyper-aware [way], certainly in the United States and we all see what happened around the world."

Most of the headlines regarding the Sixers over the past two weeks have been focused on developments on the basketball side of the NBA world. Schedule releases, hotel arrangements, and the creeping return of pro sports. But privately, that has not been the first, second, or even third thing on the mind of the head coach and the players who will head down to Orlando a week from Thursday.

Brown's players, of course, have gotten involved in their own ways since protests exploded around the country following George Floyd's death.

Tobias Harris has been Philadelphia's most outspoken player on matters of racial justice over the last month-plus, lending both his time to protests and his voice to related causes in the weeks since. Joined by Matisse Thybulle at several demonstrations throughout Philadelphia, Harris was one of the people leading the charge against Montgomery County Commissioner Joe Gale, who referred to Black Lives Matter as a "hate group" in a letter roundly criticized on social media.

Teammate Ben Simmons, who Brown said Wednesday is back in fighting shape for the season, spoke out in late May as protests were only just beginning in America.

"Witnessing the news the past few weeks [and] hearing the outcry has given me a lot to think about," Simmons said via Twitter. "It is time for everyone, from all walks of life, to get comfortable with voicing [and] calling out the uncomfortable subject of Blatant Racism that exists heavily within our society. We are ALL accountable [and] we shouldn't have to revisit tragedies like George Floyd or Ahmaud Arbery time [and] time again. Enough is enough."

Simmons punctuated the thread with an older picture of himself wearing an "I Can't Breathe" shirt, a nod to the final words of Eric Garner in 2014.

The head coach, a self-described "59-year-old white man" who says he feels ashamed every time the team travels to Memphis and visits the Martin Luther King Museum, has used this downtime to get involved in the process in a different way. In the days immediately following George Floyd's death, all 30 NBA coaches began a series of phone calls discussing what they can do to help and educate, leading to the creation of an 11-man committee on the matter, of which Brown is a part.

Led by Lloyd Pierce, a former Sixers assistant now in charge of the Atlanta Hawks, Brown says they have spoken to a variety of people locally and nationally who are more well-versed on these subjects. Quite a few people were name-dropped, including but not limited to activist DeRay McKesson, Wally Adeyemo (president of the Obama Foundation), Michael Smith (director of My Brother's Keeper), Philadelphia Police Commissioner Danielle Outlaw, Bryan Stevenson (activist and author of Just Mercy), and religious leaders in cities around the country.

Around the NBA, some have questioned whether the work of their day jobs should be set aside to meet the needs of the moment. Championed most prominently by injured Nets guard Kyrie Irving, a coalition of players have expressed reservation about playing in Orlando with protests still ongoing around the country, and with meaningful action still lacking on the subject of nationwide police reform.

In response, the NBA has agreed to help broadcast the message during games, with plans to paint "Black Lives Matter" on the court for all games in Walt Disney World and by allowing players to replace the names on the back of their jerseys with messaging related to social injustice. There are caveats with the latter — Yahoo's Chris Haynes reported Tuesday that names of police brutality victims would likely not be approved for use, out of fear of, "adding more unnecessary pain to grieving families if loved ones are omitted."

Regardless of what happens with the NBA's planned restart, the head coach believes there is work left to be done. And while basketball is the reason they will all gather in Orlando, the time spent there will allow them to all be together for the first time in a long time, where they can grapple with the nationwide state of unrest.

"What the league has decided to do in Orlando and some of the things that are now going on with Black Lives Matter, I look forward to getting in Orlando and looking at my guys," Brown said, "and trying to figure out what's our path. What can we do as a team? How about Philly? When you really dig in, what's going on really in Philly that we can maybe make a difference?"

"I do not walk in my players' shoes, but I do know a good heart, I do know right and wrong. And I hope in the role that I have to lead as best I can...I look forward very much to getting with my players and discussing this very real topic far more in-depth, and having the ability to see them."