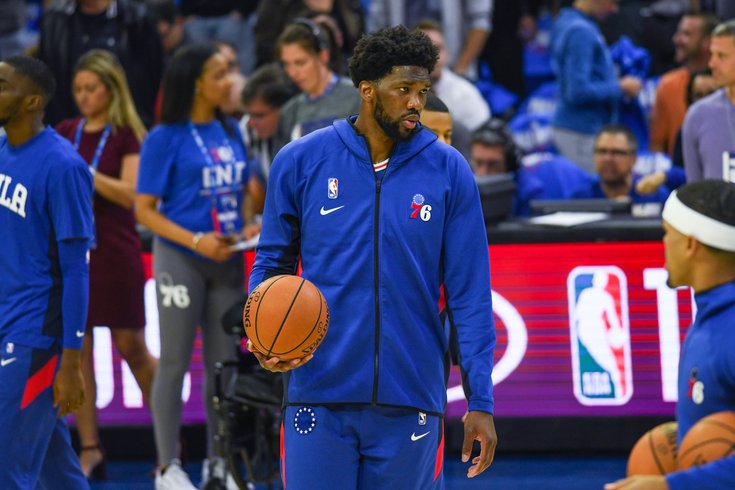 Joel Embiid told reporters prior to the Orlando restart that he was worried about potential complications from participating in the bubble. It appears he has taken the proper precautions to minimize risk as much as possible.

With the Sixers leaving for Orlando on Thursday afternoon, Embiid showed up to the airport in what appears to be a hazmat suit, as documented by the folks on the ground.

CBS3's Pat Gallen was the first to share a photo of Embiid's airport get-up, and in spite of his concern about the Orlando games, Embiid nonetheless had the time to pose next to a baby. Truly, a man of the people.

Joel Embiid in a Tyvek Suit.

Moments later, a video appeared in the feed of NBC Sports Philadelphia, revealing the need for assistance to get the suit zipped up and on correctly. A potential opportunity to ruin the integrity of the suit? You be the judge.

Joel Embiid has arrived for the flight to Orlando, in full mask, suit and glove gear. pic.twitter.com/Nz7hOtc69E

The baby photo opportunity, however, may not have been the best part of the sequence. As John Clark documented in a still shot from the clip, backup center Kyle O'Quinn (not wearing a mask, by the way) was not exactly prepared for the franchise center to show up in this sort of get-up. May we all find joy like this during the ongoing pandemic.

Joel Embiid taking off in Philly ✈️ for Orlando, is dressed for bubble

Jokes aside — and I imagine there is at least some part of Embiid playing this up to have some fun with the situation — the franchise center has legitimate concerns about resuming the season, as he explained to reporters early this week.

"I hated the idea. I feel like, with everything going on, it’s unfortunate what’s been going on in the world. Obviously, people look at it a different way, there might be some other reasons behind everything going on," Embiid told reporters Tuesday. "But to me, that part never matters to me, all I want to be is, you know, stay healthy, and stay safe, keep the people around me safe. I want to make sure I’m going to live for a long time and not have any sort of, I don’t know, consequences in the future."

Embiid would go on to say his concern rests with the uncertainty over whether the rest of the league will follow the protocols in place while they're all in Orlando.

"It doesn’t matter the fact that I don’t like that idea, and I still don’t believe in it, and I don’t think it’s going to be safe. I know I’m going to do the right things," Embiid said. "I don’t ever do anything, I only play video games, I’m always home, I don’t do anything. But then again I don’t trust those other guys to do the same. But like I said, I got to do my job.”

"I’ve been doing this for quite a bit now. Five, six, seven years, and I look at myself, and like I said all I do is play video games and stay in my room on the road. Even when I’m home, just stay home, play video games, do what I gotta do. Just be with my family and obviously we are all different. There’s some guys [that] like to go out, there's some guys [that] like to do stuff, there’s some guys that like adventure, so that’s the way I’m thinking. I know myself, I know I’m not going to put everybody else at risk, but the question is, ‘Is everybody else going to do the same?’ And I surely, just being around this business, I surely don’t think so."

That being the case, he's taking matters into his own hands and doing what he can to prevent any complications. Regardless of how we all feel about whether the league should move forward with the restart or not, we can all agree on the desire for safety and good health to all who end up making the trip.