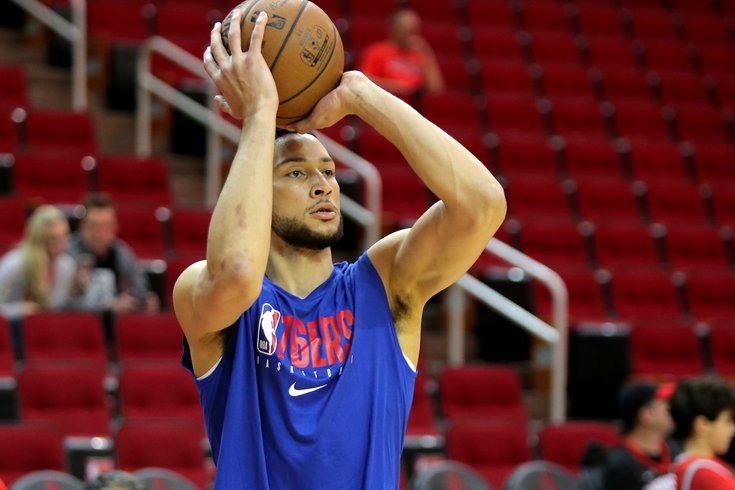 Ben Simmons works on his jumper.

You have seen it, heard it, felt it all before. This is going to be the time Ben Simmons' shooting takes. This video — this in-game rep, this pregame shoot-around, this moment — is the proof that he is about to take the next step everyone has been demanding. If you are on the side of skepticism, believe me, I get it. Roadrunner can only make Wile E. Coyote run into the desert rock painted like a road so many times.

But in some corners, optimism has not yet been defeated. And after a new wave of videos showed Simmons shooting threes (and shooting them well), it was only natural to dwell on the topic for a bit.

"His three-point shot is looking good, he shot more threes in practice the last few days than he might have for almost half of a season," head coach Brett Brown said Thursday. "He looks good, he feels good, and I know he's getting tremendous encouragement from his teammates."

And now we're off to the races. Could this finally be the moment? Is the fan-less environment in Orlando the runway for Simmons to let it fly, free from the jeers of the crowd and the usual pressure of an NBA game? Perhaps.

That's the message Simmons himself has chosen to share with the masses. In a video he released on his YouTube channel documenting his return-to-play workouts in Los Angeles, Simmons (and videographer Alex Subers) made sure to include a lengthy clip of Simmons knocking down shot after shot, moments before an exchange with Detroit Pistons wing Tony Snell.

Snell: You should be shooting way more. Your shot looks good.

Simmons: I'm coming for it.

Simmons has followed that up, evidently, with some distance shooting in Orlando. In footage released by the Sixers from team practice, Simmons was spotted confidently stepping into a made three in a scrimmage while facing a sagging defense not dissimilar to what rival teams employ against him.

This is the holy grail for Simmons for a reason. Without the jumper, he's one of the most impactful two-way players in the league, but a simple matchup for opponents to scheme against. With any sort of respectable shot (which admittedly is a quantum leap from what he has offered so far), defenses won't just have to reconsider how they defend Simmons, but the Sixers as a collective.

That's what gets people fired up about things as simple as a positional swap for Simmons. Basketball is mostly positionless in 2020, so moving Simmons up to the four is almost more noteworthy for what it says about Al Horford than what it says about Simmons. Still, the early lineup juggling and Philadelphia's quarantine studying has them looking at all the ways they can tap into Simmons' Swiss Army knife tools.

"You're just using him in a bunch of ways and you're seeing all the different ways he can score," Brown said over Zoom. "I think just because of the variety of ways we're trying to use him, [it] helps in some capacity. Most helpful is his mentality; he's come down here with just a tremendous spirit."

One of those ways that isn't centered around his jumper? Unleashing Simmons as a screener. It's an area where Simmons certainly thrived as an amateur player, rolling downhill and using his athletic gifts to power toward the rim and finish. The Sixers haven't explored it a ton, in part because of teams being able to sink on Simmons, in part because they've had a deficit of guards who teams need to chase over screens.

Shake Milton, the man who is expected to join the starting lineup, has changed that. In practice, Brown has deployed Simmons in middle pick-and-rolls to put him within "a gather step away from the rim," and Milton's presence is helping to facilitate that.

"We haven't had a ton of guards over my time that defenders are forced to go over. When you have a guard and you have a point guard that the defense is told and the player is scouted, 'We prefer you chasing over pick-and-rolls more than shooting gaps and going under'....then the world makes even more sense," Brown said. "It opens up Ben even moreso on those honey spot half-rolls especially."

"I think when you got a legitimate guard like Shake, and people chase, I hope to be able to [run more pick-and-rolls] than we have in the past."

Threes from Simmons? Increased pick-and-rolls? That sounds like music to the ears of most Sixers fans. But we've heard strong claims before. Brown once demanded at least a three per game from Simmons, only for that request to fall flat, held up as an example of the coach's inability to get through to Simmons. If practice footage was all that mattered, 90 percent of the NBA would be awaiting calls from the Hall of Fame.

As always, it's on the star in question and the coach setting up the team to act on these promises when the games begin. The cycle begins anew.

• Simmons' partnership with Joel Embiid is, in many respects, the only thing that really matters for this team long-term. If they figure out how to maximize one another, the sky is the limit. If they can't make each other better, well, the project may fall apart.

That's part of what the positional switch for Simmons is meant to accomplish, too. When Simmons and Embiid play a bully ball style, taking advantage of their size and athleticism around the rim, they can compromise defenses in a hurry. Snug pick-and-rolls have been successful for those two dating back to Simmons' rookie year, and Brown is hoping to facilitate more work around the rim in Orlando.

"You could see just with Ben playing a sort of an interior position more than being the primary ballcarrier, you could see that sort of that big-big relationship. Hi-lo, duck-in, Joel would be posted and Ben would be posted on what I call a low zone on the other side of the floor," Brown said. "The partnership, the relationship, the big-big mentality, finding each other was crazily obvious, something that caught me off guard when you haven't played basketball in four months."

Before anyone goes penciling in Embiid-Simmons as the frontcourt for the foreseeable future, Brown did note that this week featured more looks and focus on bench-heavy groups. Simmons was at the helm of a five-man group Thursday that also featured Furkan Korkmaz, Matisse Thybulle, Tobias Harris, and Al Horford. That puts Simmons in charge of most, if not all of the creation for others, and back into a traditional point guard role.

• Josh Richardson's name hasn't been brought up a whole lot since the team landed in Orlando, but the newly-blond guard has been an integral figure during early practices, to let the head coach tell it.

"I'm reminded of just how good of a defensive player he is," Brown said Thursday. "He has been outstanding, he has really sort of set the tempo of our defense."

Brown's chosen style in Orlando so far has been to keep guys in lineup groupings for full practices, rather than mixing and matching teams within the window they have to play. Thursday, with Simmons flanked by the group mentioned above, Brown attached Richardson and Embiid together for the full session, which was common when both men were healthy this year. And with pick-and-rolls supposedly on the rise for the whole team, that duo might see some time running the NBA's staple play.

As a primary initiator, Richardson has his warts, and it's a big reason Miami's offense was pedestrian with Richardson masquerading as their top option last season. The prospect of Milton in the starting lineup excites, but it ultimately adds just another capable ballhandler, not necessarily a great one. Philadelphia's search for the perimeter alpha is still ongoing.

But it does feel like they have options, with deadline acquisition Alec Burks available to bring some instant offense (or at least instant shot attempts) to the floor at any given moment. It's not a luxury they've had in the past.