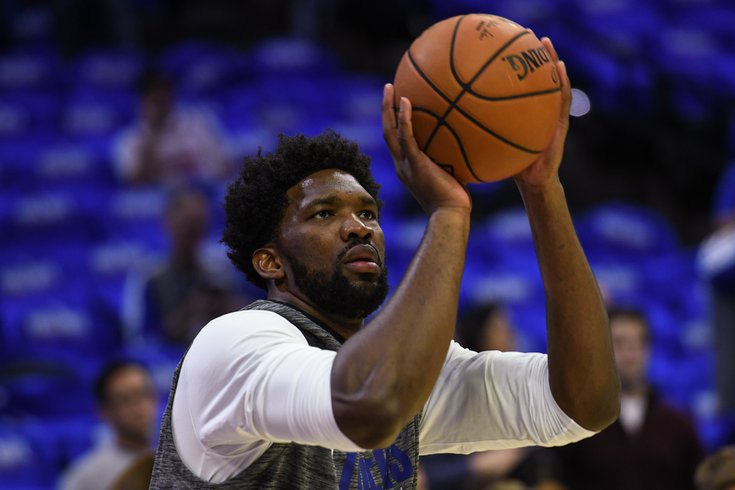 It sounds insane to say about a group of professional athletes whose whole job is to be in good shape, but physical conditioning will likely be a defining story of the NBA's Orlando restart. With limited access to gyms around the country and plenty of excuses for rust to build over four months, showing up in decent shape may end up being half of the battle.

The Sixers, according to the coach, are off to the right start on that front.

"I can tell when you do up-and-down stuff really, really quickly the work people have put in. As practice goes on, you can start to really feel and see an endurance deterioration or maintenance of the standard," Brett Brown said Sunday. "In that environment, I felt there was a pretty good judgment of, 'Are they in decent shape?' Did they attain that B [grade] goal I had put to them? I can confidently say I believe that they have. I think the runway to take a B to an A is in front of us."

The standout, Sixers fans will be delighted to hear, was Joel Embiid, the man whose health and conditioning has been a running plot line for the entirety of his NBA career. Praised by Brown and teammate Josh Richardson prior to their departure for Orlando, the big man was evidently ready to rip at their first intense practice in Florida.

And the head coach wasn't interested in easing everybody into it. This was the first time the Sixers were able to have a full-scale, full-team practice in quite some time, and they used the opportunity to jump right into five-on-five basketball, getting up and down the floor in a way they haven't (at least that we know of) since before quarantine began.

"It was very competitive, it was up-and-down," Brown said. "I have 15 people so we would have done, a lot of what I was doing was five-on-five-on-five, we call it cutthroat. Then we played out of an environment I call play-run-run, where we touch something offense/defense, then run-run out of it, score, and so on. We just took a very simple environment, made it competitive, and the guys were fantastic."

The camaraderie and "spirit," an oft-used pet term from Brown, are at the forefront of his mind as they restart. Isolated in their homes and connected only through digital means for most of the last four months, the coach and his players see value in reclaiming simple parts of lives they once knew. Team meals together, practice sessions involving the whole team, even bus rides to and from events feel welcome after a period of physical detachment.

Four months later, the Sixers are confronted with a problem none of these players have dealt with in their careers. Mid-July is usually a time for players to have time off and perhaps work on their individual games, and COVID-19 has turned it into a ramp-up period for the August playoffs. After a break as long as many normal offseasons, they return feeling like they are starting a completely new season.

"This feels completely new. Coach talking terminology, things about the offense and things like that, it takes you a second to start processing some things and getting back to speed," Al Horford said Sunday. "Coach is teaching everything, putting us through things, and we're learning everything all over again."

"I think it's positive, it's a positive for our group. We're fully healthy No. 1, and then second, we have guys that at the trade deadline came through, Alec Burks and Glenn Robinson. For them to get this from the beginning and get this time, I think it's going to be very good."

The head coach has been coy about any major decisions with his rotation (including in determining Horford's place in the lineup), and remains non-committal on the subject even as they begin the restart in Orlando, save for a couple of exceptions:

The next few weeks will determine most of the makeup of that 10-man group, and even without the bubble element of the restart, this is a genuinely unique opportunity for a pro basketball team. Most of the way through a season, they get to have an extended training camp to brush up on their systems, take a second look at lineups, and just practice together early and often, something they're not able to do under normal circumstances.

And as Brown sees it, the best opportunity of all is being there in the first place.

"You take off your mask and put a basketball in your hands, you've got a passport to what you remember and what you feel like brings you to a level of normality that none of us had," Brown said. "There was a spirit that's hard to quantify, born out of the environment."

• The only other noteworthy point of discussion from Sunday's practice was Al Horford's proclamation that he would not be altering his jersey to include one of the NBA's approved social justice phrases in place of his name.

Though the NBPA came to an agreement with the league on the messages they could include, which range from focused causes ("Black Lives Matter") to broad concepts ("Equality"), some players have suggested they were not offered much input on the messaging, including Philadelphia's own Mike Scott, who called the program "a bad miss" that didn't accomplish much of anything.

Horford, who is not typically the sort of guy to rock the boat, nonetheless stood with his teammate on the subject.

"I think that was a good idea initially by the NBA, ultimately I'm not going to have one. I've gone back and forth a little bit," Horford said. "I kind of understand and share Mike Scott's sentiment a little bit. Even though this is a great platform for us to promote things, I think we have the ability to say what we want to say and kind of leave it like that."

Coming from Horford, that's the equivalent of a blistering Embiid rant.

• Okay, I lied, one other notable. When Furkan Korkmaz showed up for his interview with reporters on Sunday morning, bedhead in full effect at 9:30 EST, he made sure to have a little fun with reporters before getting things started.

"Let me fix my hair," he said before running a hand through it for the cameras.

I can tell Korkmaz this — if you're asking a bunch of sports reporters to wake up early for interviews on a Sunday morning, I can almost guarantee your hair will look like a movie star's in comparison.