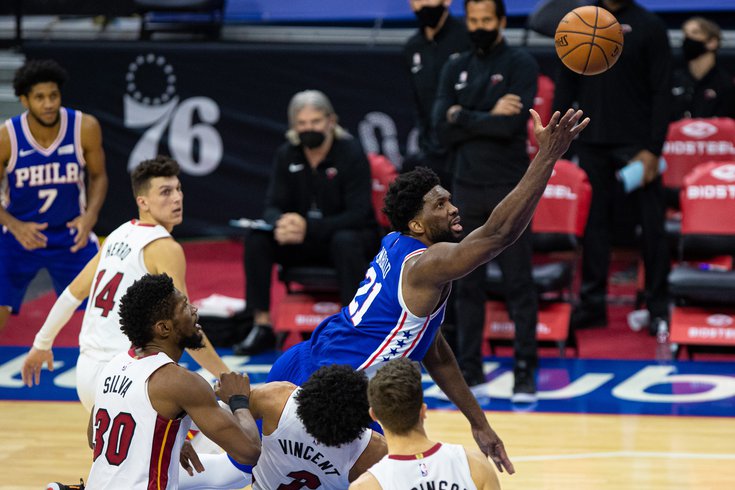 Joel Embiid put the rest of the Sixers in his backpack and carried them to a narrow overtime win over the Heat, with Philly emerging victors in a 137-134 thriller thanks to 45 points from the franchise center, a game that should probably spark MVP dialogue.

• I won't sit here and tell you this was a wire-to-wire effort from Joel Embiid, who dragged through about a quarter and a half of this game. But with Philly looking like crap after 24 minutes, the big guy apparently decided enough was enough and demanded that his teammates remember whose team it was. The real damage started as soon as Ben Simmons hit the bench and made way for rookie Isaiah Joe, opening up the floor and making double teams a more dangerous proposition for Miami.

Embiid's activity was a huge part of the story. He moved back and forth across the lane, demanding the ball from anyone who happened to have it at the time, and he punished Miami's undersized front line with a dazzling array of moves. Up fakes, Euro steps, shots off the glass, fadeaways from the post, he had absolutely everything going, and he even sprinkled in a great lob finish from Simmons when Miami overplayed their snug pick-and-roll set in the corner.

Once Miami tried to start sending more pressure at him, Embiid hit their shooters, who came through for the big guy more often than not. It was even more stunning because Philadelphia struggled to even get Embiid the ball in the first half, with Miami sending double and triple teams at the big guy, daring someone else to beat them. Even when Miami knew he was the guy who would get and take a big shot in crunch time, Embiid managed to cash out anyway.

He hit this jumper after the refs called a blocking foul pic.twitter.com/egrNRVHDmr

Then there was the defensive effort, with Embiid waking up after a lethargic start and absolutely locking down the paint for most of the third quarter. Lobs that were there for Miami early were swallowed up by Embiid, even with the Heat beating Philly's perimeter defense like an old drum set.

And when the Sixers needed him to dig deep in the second half of a back-to-back, anchoring a lineup filled with players who were running on fumes, Embiid somehow reached back and found the strength to drag a group of backups to the finish line, with no point guard to initiate the offense and little help on either end. If the big guy wasn't getting it done for Philly, nobody else was. When shots like this are going in, you know it's your night:

Even a pivotal Danny Green layup in the final minutes of OT was created by Embiid turning into a human rag doll in the paint to tip a rebound up and extend the play. This is the sort of game that kicks off earnest MVP discussions in a normal season, even with the lethargic start to the night. Embiid absolutely refused to lose this game.

• The turnovers were absolutely gruesome and he should never be asked to playmake as much as he is right now, but Danny Green will be a helpful basketball player for Philly as long as he's in a proper role instead of needing to create off the dribble in the halfcourt. His shooting finally came around on Tuesday night, with Green exploding for nine three pointers and 29 points after a dreadful night in Atlanta.

Green may go through cold stretches, but one thing you can count on from him is a consistent approach and a lack of fear when the ball swings his way. He's a composed, if up-and-down shooter and the Sixers badly needed him to come through with Simmons having a howler and little else going right outside of Embiid.

The other end of the floor was, similarly, a mixed bag, but he's not the guy who is supposed to be first-team All-Defense. Green came up with the biggest play of the game with time winding down in the four quarter, poking the ball loose after a made three from Isaiah Joe and earning Philly the possession that would ultimately allow them to tie the game. He's one of the guys who played the longest last season and had every right to struggle down the stretch, but he came up with a play when they absolutely had to have it.

• Isaiah Joe is likely to be buried on the bench once the Sixers get healthy again, but I really like what he has shown over the past few games, even with warts he has on defense. He looks relatively at ease in his role within Philadelphia's offense, and he has shown more composure creating than I thought he would this early in the year, getting involved in some of Philly's pick-and-roll offense on Tuesday night.

The most important thing for Joe on Tuesday is that Miami showed him lots of respect on the perimeter, changing how they defended Philly in the paint while he was on the floor with Embiid. If you make life easier on the franchise player, there is a path to minutes in the rotation. And to Joe's credit, he did not blink once while playing big crunch time minutes, fighting hard through screens and confidently stepping into threes in the guts of the game.

• Dwight Howard was brutal in the first half like most of the rest of the team, but he kept Philly's energy high in the second half after Embiid got a well-deserved break and needed to maintain the lead they fought hard to get back. When he's not just running guys over fighting for offensive rebounds, he creates a ton of second-chance opportunities.

• Ben Simmons has had some ugly games in a Sixers uniform, but this is up there with the worst games he has had as a professional. It was hard to figure out what exactly he was hoping to accomplish possession to possession, and the longer this season wears on, the clearer it becomes they'll run into problems when the playoffs roll around and he has to create something out of nothing.

I feel like a broken record and we're only a few weeks into the season. There were multiple possessions in the first half alone where Simmons picked up his dribble without any sort of plan in mind, including one ugly moment where he had a clear shot at the basket with nobody really guarding him at the free-throw line, yet he never even looked at the rim. This would be ridiculous for a middle school basketball player, let alone a max-contract guy in the NBA:

On a night where they are shorthanded and relying on bench players to play big roles, he had just two total shot attempts. That is simply unacceptable. What's the point of spending part of your pregame routine working on midrange shots with Sam Cassell if you aren't ever going to even look at the rim during the game?

When he was a rookie and judicious with his shot selection, it was easy to say he was being judicious and looking to get other people involved. How could you say that with a straight face now? It's not like his reluctance to attack is balanced out by constantly good decision-making, either. Against Miami, he often tried to play uptempo with nobody joining him, flying into opposing defenders and picking up offensive fouls, or resetting the offense instead of just looking to challenge somebody at the rim.

There is no amount of defense he can provide to cover for the holes on offense, especially not on a team built around a post-up center. And even his defense was a mess on Tuesday, with Simmons committing 2-3 horrible fouls that would eventually earn him a spot on the bench.

On defense, I can buy, "It's just one game." On offense, something has to change and fast. They're not paying him to be Rajon Rondo, and even a young Rondo would have been embarrassed by some of these plays.

• Joel Embiid did not impact the game a whole heck of a lot in the first half on Tuesday night, though you could attribute a lot of that to a supporting cast that simply did not or could not get him the ball. Early on, Joel Embiid was fighting hard to get post position and playing within the flow of an offense that didn't really keep him involved. Miami was daring Philly's shooters to beat them, and that worked out in the Sixers' favor for a spell, with Danny Green and Mike Scott getting off to decent starts from deep.

As time wore on, however, Miami's pressure on the big guy inside the arc junked up their offense something fierce, and they ran out of answers fairly quickly. This is a team that should, at the very least, know how to get their best player the ball at almost any time, like they would eventually do in the second half.

• Tyrese Maxey's defense was horrific for long stretches of Tuesday's game, the sort of thing you expect from most rookies but is a little more painful when you basically need to keep one on the floor in order to keep a credible ballhandler in the mix.

There are excuses you can attribute to his age — fighting through screens successfully will get easier for him as he gets stronger and can brush off traffic — but there were misunderstandings of the scouting report that are hard to excuse. Maxey gave far too much room to guys like Tyler Herro and Duncan Robinson on the perimeter, and he tried to make up for made shots by gambling away from the ball, a decision he was burned for swiftly.

Maxey's entry passing (or lack thereof) is another thing to keep an eye on moving forward. He was a big culprit in Philly's inability to get Embiid touches early, either because he was unable or unwilling to attempt to feed him while he was under duress. He did not look especially comfortable in an Embiid-centric environment, and he's got to find ways to avoid the ball sticking when he's the guy on Embiid's strong side.

(A side note: Embiid was absolutely livid with Maxey for not being in the spot he expected him to be in for a perimeter outlet. Be careful of the wrath of the big guy, young fella.)

• At what point do we see the Sixers exhibiting a lot of the same problems on offense, having the same swoons in effort, issues with lesser competition, and conclude that there is something wrong with the core pieces playing together that is hard for anyone to fix?

Maybe not soon, especially because the Sixers were running on fumes and shorthanded on Tuesday night, but they weren't exactly up against the 1995-96 Chicago Bulls. It shouldn't have taken this sort of performance from Embiid to squeak out an OT win over an eight-man team.