Instant observations: Sixers get blown out by Hawks despite return of Joel Embiid 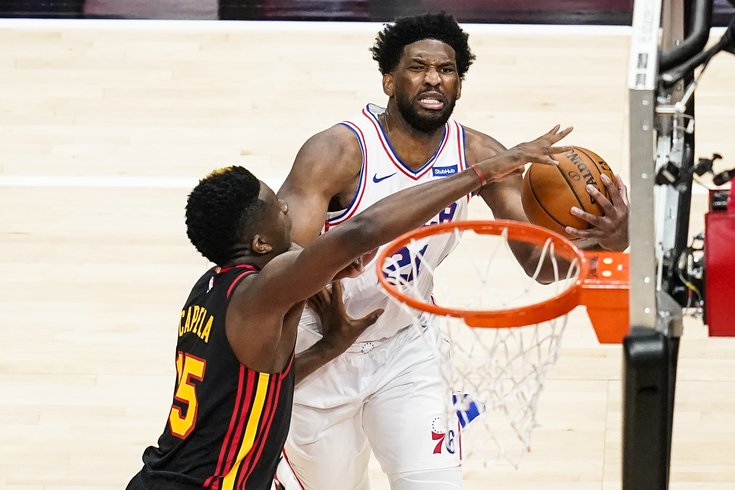 The shorthanded Sixers got run off the floor in Atlanta despite the return of Joel Embiid, and Philadelphia will have to shake off the 112-94 loss overnight with a back-to-back against Miami looming.

• It's never "good" for the Sixers to be without Ben Simmons, but with improved guard play and shooting behind their starters this year, Philly has never been better equipped to spread the floor around Joel Embiid and let him go to work. We can at least learn something about his growth from games and moments like these.

From the opening whistle, Embiid was ready to attack, putting up 16 points in the first quarter alone and 24 points with 10 rebounds by the time halftime rolled around. Atlanta's single coverage was nowhere near enough to deal with him, and the big guy turned in several highlight plays in the first half before things got ugly.

There was a downside to Embiid's early dominance — Atlanta came out and hard doubled him throughout the rest of the game, and while he dealt with that pretty well, the Sixers missed too many open threes to survive in that style of offense. He would eventually get pulled early in the third quarter, and it appears Doc Rivers just wanted to live to fight another day. Understandable with a back-to-back in Philly tomorrow night.

• Tyrese Maxey did not repeat his loud, all-caps performance from the loss against Denver over the weekend, and I actually thought he was a little too passive with the ball in his hands with Embiid back in the lineup. But I'm not going to be too hard on a rookie for deferring to the star player, and he continues to hint at a bright future with his play so far this season.

The Hawks showed plenty of respect to Maxey, sticking 6-foot-8 Cam Reddish on the rookie for long stretches of the game, and though the Duke product bothered him at times, Maxey still found ways to get to the rim and hunt the looks we're quickly growing accustomed to him taking.

Maxey drew the unenviable task of guarding Trae Young on the other end, and while Young's had himself a nice night, a lot of that damage was done with other Sixers guarding the Atlanta phenom. Maxey refused to get roped into Young's foul-drawing tactics, and he got the best of Young on a few occasions, coming up with two blocks on a guy whose shot is hard to get a hand on even at his size.

In a future where Shake Milton gets bumped into the starting/closing lineup this year, Maxey has shown you he can carry the responsibility as the lead guard off of the bench. Love what he has shown to date.

• A lot of people are going to focus on how bad Isaiah Joe is on defense right now, which is a worthwhile thing to care about, but I think we should all keep our expectations in check for a kid who was taken with a late second-round pick.

Joe was limited by foul trouble against Atlanta, but the variety of shotmaking he showed was terrific, from standstill threes to pull-up jumpers to a three he made coming off a handoff above the break. He has an NBA-ready skill, and now it's going to be up to their development staff to bring the rest of his game along.

(For the record, I agree that he's an actively bad defender who needs to do a ton of work with the strength and conditioning team to become a playable rotation guy.)

• There will presumably be few games like this one the rest of the year, but it felt like a Process-era flashback watching most of the roster try to create offense on Monday night. When Maxey was in the game, they had the chance to be effective creating from the perimeter. In the few moments of rest Maxey got on the bench, they struggled to even get the ball across halfcourt, let alone run a credible set in the halfcourt.

It makes you appreciate how much better equipped the healthy Sixers are to create from the perimeter than they have been in years past. Maxey would have been one of the best (if not the best) ball handlers on any Sixers team in the last decade or so. Not that that's saying much about some of those groups.

• The second quarter was an absolute bloodbath for Philly, with the Hawks surging out to a comfortable halftime lead with a 37-18 quarter to close out the first half. There are plenty of excuses to fall back on for their lackadaisical rebounding, poor transition defense, and inability to stop the Hawks in the pick-and-roll, but regardless of the reason, they offered very little resistance once Atlanta got going.

I understand that Doc Rivers was in a tough spot with his rotation options on Monday, but surely we did not need to see as many Twin Towers lineups/minutes as we did against Atlanta. Embiid and Dwight Howard do not help each other in basically any way while sharing the floor, or at least they didn't on Monday.

It would have been one thing had the Sixers been able to capitalize on the advantages created by going ultra-big, but they were outrebounded at both ends and struggled to contain the pick-and-roll lob game the Hawks had going between Young and Clint Capela. So what's the point?

The Sixers might have been able to get something out of the look defensively, but they could not find someone who was helpful as a weakside help defender/rim protector, even as they tried both Embiid and Howard in that spot at times. It's definitely not Embiid's game — particularly when you're asking him to potentially flash back to the corner at a shooter — and the Hawks bludgeoned Philly in the pick-and-roll as a result.

Philly has been able to survive offensive swoons this year by buying in on defense and waiting for shots to drop. That side of the ball started to slip before the COVID wave overtook the team, so it's a trend to watch once they get everyone back in the lineup.

• The offensive side of the second quarter was not a whole lot better, but the failures there were a little more defensible/understandable. They simply missed shots, and for a team down to its end of the bench players in many respects, that just comes with the territory.

If we're just talking about shot quality, the Sixers did more than enough to generate good looks before they took their foot off the gas and accepted their ass-kicking. Embiid was dominating against single-coverage whenever the Hawks offered it, and he continued to make the right reads when double teams became more automatic throughout the night. Unfortunately, creating open threes only guarantees a clean look, not a make, and this overextended lineup couldn't cash in.

Not everything can be blamed on the backups, obviously. When Danny Green goes cold, it genuinely feels like he's never going to hit a shot again, and the Sixers have unfortunately seen him run into that rough patch at the time when they need him most. Green was set up for a big night with open shot after open shot falling into his lap, and he couldn't buy one.

I'm not going to overanalyze how bad the offense looked when it was run through anyone but Embiid or Maxey, because this group is not equipped in almost any way to self-create or sustain an NBA offense. Half the guys who played Monday can't dribble. Didn't make it any easier to watch even with that caveat.

• Mike Scott was a useful playoff contributor for Philadelphia as recently as two seasons ago, but man, he has gone off a cliff since that playoff run. He has shot poorly for most of the last two years, struggles with defense on and off the ball, and offers little-to-no creation ability with the ball in his hands. But other than that, how was the play, Mrs. Lincoln?

• I always forget about how annoying it is until the Sixers are playing the Hawks, but the, "FOR THREEEEEEEEEEEEE!" with a loud siren after every made three for the home team is absolutely insufferable. Please make it stop.

• Speaking of things that should stop, let's try to avoid any scenario where Dwight Howard is the driver on a dribble handoff. Unless the goal is slapstick comedy, in which case, please continue with the look:

This is certainly an offensive play. pic.twitter.com/CE7wwPUNy7

I know they were down to nine guys, but there's still no reason to be resorting to stuff like this. Howard has plenty of other things he's good at!

• The NBA certainly seems like it will power through the wave of positive tests and continue playing, and just from watching this Sixers team over the last few days, it seems like a terrible idea. This season has already been overrun with blowouts around the league, a problem that is going to get worse as teams play shorthanded and have to prepare for back-to-back games (as the Sixers did Monday) and a generally condensed schedule that can snowball in a hurry.

I say this as someone who loves basketball as much as pretty much anyone — this ain't the NFL. People aren't going to keep tuning in over and over again the way they settle in on Sundays if the product is bad. It was very bad for the Sixers on Monday, and not only that, it's another loss that hurts them in the standings despite a bunch of justifiable excuses for their performance. Pretty terrible stuff.