Sixers to be down at least eight players, including Ben Simmons, vs. Atlanta on Monday 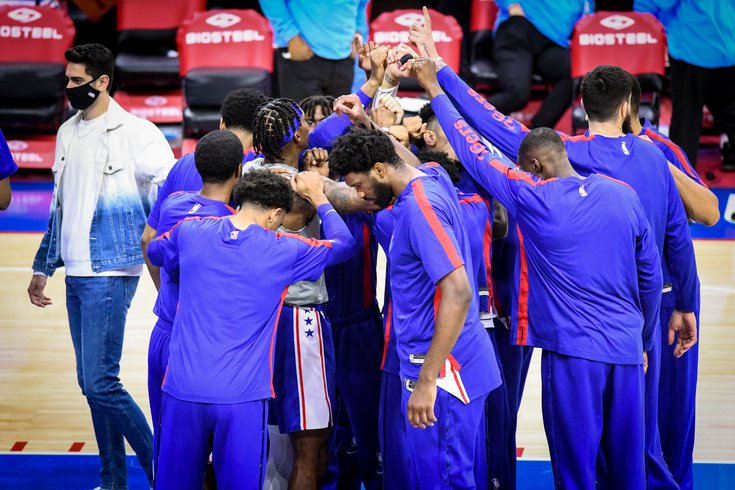 The Philadelphia 76ers huddle before a recent game.

The Sixers will be down at least eight players for Monday's game against the Atlanta Hawks, including Ben Simmons, with six more players ruled out as a result of the NBA's health and safety protocols.

Simmons, who was a late addition to Saturday's injury report with swelling in his left knee, did not travel with the team to Atlanta, as was previously reported by The Athletic. The team says Simmons has responded well to treatment on the knee, and he is considered day-to-day as he goes through the treatment process. The swelling is in the same knee Simmons had surgery on following an injury suffered during the league's bubble restart.

Joining him with absolute certainty on the shelf for Monday's game are Furkan Korkmaz (abductor strain) and a group of six players impacted by the health and safety protocol: Seth Curry, Shake Milton, Tobias Harris, Matisse Thybulle, Vincent Poirier, and Terence Ferguson. Four of those players (Harris, Milton, Thybulle, and Poirier) are expected to be out for seven days, a team source told PhillyVoice, eligible for a return following their mandatory quarantine period. Curry, having produced a positive test, will be on a different timeline from that group of four.

The group that suited up for Saturday's game against the Denver Nuggets should be getting a couple of important reinforcements if everything goes well for Philly between now and Monday night. Joel Embiid has been upgraded to probable for Monday's game at Atlanta, and a team source says he was in better shape on Sunday evening than he was Saturday afternoon. Playing shorthanded still isn't ideal, but the presence of their best player would give Philly a better shot to win on the road.

Mike Scott is also expected to play on Monday after being upgraded to probable on the team's injury report. While Scott was technically "available" to get Philadelphia to the roster threshold of eight eligible players on Saturday, Doc Rivers elected not to use him, believing he wasn't ready to go. Scott should be ready for at least a small role against the Hawks, and the presence of another forward will allow the small-ish group they put on the floor against Denver to slide into place a bit better.

At best, the Sixers are still looking at a nine-man rotation with no reinforcements, three centers, and very little room for error. The Hawks have cooled off after a hot start, but the Sixers will still have their hands full.