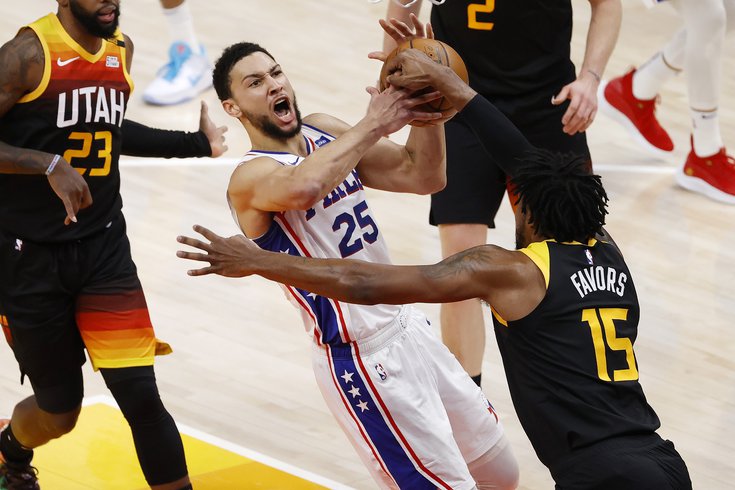 Despite a career-high 42 points from Ben Simmons and a terrific secondary performance from Tobias Harris, the Sixers fell 134-123 in Utah to close out a 1-3 road trip.

• Ben Simmons' first quarter is the best sustained run he has ever had as an attacker and I'm not sure it's particularly close. When you consider it came against a top-five defense with one of the best rim protectors in the league, it's basically in a category all by itself even if he hadn't set a career-high for points in a quarter (19).

With the Jazz missing a bit of pep in their step shortly after Joel Embiid was ruled out for the night, Simmons wasted no time attacking the heart of Utah's defense. As he has often done when Embiid has been unavailable, Simmons pushed the pace at any and every opportunity early, and he did a terrific job creating and absorbing contact from Jazz defenders.

Rather than being intimidated by Gobert's length at the rim, Simmons went down main street and won more often than not. That may very well have been a product of starting hot from the free-throw line — Simmons was nearly automatic at the line against Utah, and as the game wore on he was actively trying to manufacture free throws whenever the Jazz left the door open.

(Side note here: I loved that Rivers was willing to lean into the small look out of the gate even as someone who has repeatedly expressed my skepticism about it working. The Sixers threw a completely different style at Utah than the one they likely prepared for, and these were valuable reps for a grouping Rivers will probably turn to down the road.)

Simmons was one of the leaders in the fight to control the glass on top of that, and Philadelphia was able to beat the Jazz in an area of strength for at least the first half of the game. He continued to force the issue on offense in the second half, a fact that distinguishes this performance from many other Simmons games, and he made his mark on this game in a big way.

I would love to see this version of him all the time, but that might be a little greedy. At the very least, this is a game that the coaches can put on tape and show to Simmons to give him belief in who he can be if he reaches out and takes the game in his hands. That was not a Mickey Mouse team that he just dismantled. Setting a career-high with 42 points against the hottest team in the league is something to be proud of.

• Quietly, Tobias Harris matched Simmons' aggression and effectiveness for most of Monday night, and that loomed large when the Sixers had to buy rest for Simmons in the second half. As with Simmons, pace played a big part in his big night — Harris wasted little time whenever he had the ball in his hands, whether he was attacking somebody in the mid-post or tearing up the floor in transition.

Playing out of the small look they opened the game with, Harris got to run more pick-and-rolls with Simmons as the screener, and I thought both guys looked good in that combination. Simmons slipped into a few gaps in the Utah defense and finished strong at the rim, Harris walked into some easy jumpers on strong Simmons screens, and Harris' decisiveness never allowed the Jazz to get comfortable defending him.

One thing I'd like to see him continue doing that we haven't seen enough of? Pull-up shooting from three out of those pick-and-roll looks. He is a gifted enough shooter/scorer that he can make those at a decent clip, he just tends to take the extra dribble or two to cash in from midrange instead. The Sixers badly need to increase their attempts from three, and there's no better place to turn if you're asking me.

• For one night and one night only, I absolve Dwight Howard for the struggles of Philadelphia's bench. He was good in the first half, and most of his fouls were on 50/50 plays or "professional" fouls to prevent guys from getting a clear look at the rim. On a night with Embiid in the lineup, this would have been a good enough effort from him to get a win.

• The discrepancy in made threes by the Sixers and made threes by their opponent has loomed large lately, with the Sixers' midrange heavy offense leaving them little room for error. This game was a great illustration of the problem they have in front of them, with Utah able to keep pace and eventually surpass them despite the Sixers crushing inside the arc to start the game.

In the first quarter, the Sixers shot 16/22 for a blistering 72.7 percent from the field, a number that should leave any team with a monster lead. They only built a seven-point lead during that time period, and a huge advantage beyond the arc for Utah was the story of the half. The Jazz finished the first half 9/24 from deep compared to just 3/6 for Philadelphia, and that was enough for the lead.

Utah wasn't exactly forcing up bad looks the entire half, either, some heat checks from Jordan Clarkson and the usual gunning from Donovan Mitchell aside. The Jazz consistently collapsed Philadelphia's defense to create open three after open three, using an assortment of ballhandlers to attack weak links in the defensive chain. Clarkson outshot the Sixers from deep as a team for most of the night.

Is it worth tearing down their defensive effort against a great team while missing their best player? Maybe not, but broadly speaking I think they've been a slight disappointment on defense and certainly not good enough lately. That has coincided with matchups against teams with good guard play recently, and their ability to contain ballhandlers has to be a concern looking down the road.

(How much of that is due to coverage/scheme vs. personnel? That's something that's hard to say right now as they toggle in and out of looks they've had very little time to practice on. On the whole, it just feels like they have some standout individuals rather than great team defense right now.)

The three-point gap is a problem we're going to discuss some more in a piece tomorrow, but this is a trend they have to do something about. With Daryl Morey running the team, I think you can feel confident they don't believe this is acceptable.

• What a miserable bench this has turned out to be, Shake Milton caveat or not. The script has become the same almost every night, with the starters getting out to a lead and the collapse beginning as soon as Philly is forced to dip into their reserves.

Admittedly, this problem is amplified when your best player is out and staggering options are limited. Still, guys who apparently have safe spots in the rotation are offering next to nothing right now. Furkan Korkmaz has had more flashes than I think people have given him credit for, but the average night has been rough on offense and he was not up for the physicality of the game on Monday night.

Beyond that, it seems there are too many possessions where the Sixers run a meandering pick-and-roll that goes nowhere and then reset the offense with no tangible benefit to show for it. That's a style that can work great if you have a high-level screen-and-roll partnership to carry the unit, as the Jazz do, but that's not the case for Philly.

I think the Sixers absolutely have to try some different things over the next month or so leading into the deadline. The first place I'd look is to give Isaiah Joe a chance to rejoin the rotation and see if he sinks or swims. He's a willing and able shooter, so even if the stylistic issues remain, he might be able to give you a lift. Rivers gave the rookie some burn at the start of the fourth quarter, so maybe we're on the same page.

• A more pressing concern is the play of starter Danny Green, who is still a perfectly helpful off-ball defender but basically doesn't have the legs to guard guys on-ball anymore. It's a tough problem to work around when so many more players are capable of taking you off the dribble in today's NBA. Any guard with a good first step is leaving him in the dust, and with Green's inability to take players off-the-dribble, he's got to produce value purely as an off-ball defender and standstill shooter.

Bad news: his come-and-go shooting is hard to predict on a given night, and he often creates more problems than he's solving, especially when he's forced to dribble (something he and Matisse Thybulle can bond over). For a guy who is supposed to be offering "veteran presence," he makes a lot of unforced errors at inopportune moments.

Whatever the Sixers think they're getting from him as a locker-room presence, teammate, and floor spacer, they can almost certainly do better from an on-court perspective. They cannot rely on him as a starter/finisher on a high-level team, not unless Simmons is capable of sustaining levels of play like he showed on Monday while Embiid also stays in MVP form. Not counting on that.

(Seth Curry was also a victim of a lot of on-ball bullying on Monday night, but the difference with him is that he has a high-level skill that will keep him on the floor. End of the day, neither should be a starter in the ideal version of this Sixers team. The alternative options are just not great right now.)

• Joel Embiid missing this game was a tough pill to swallow in the 20 minutes before the game started. It was especially brutal after Doc Rivers played coy at his pregame press conference, suggesting he wasn't aware there was anything wrong with the big guy, let alone that he was in jeopardy of missing the game.

If it was a bit of gamesmanship from the head coach, well played. Doesn't make it any less of a bummer for people who wanted to see the Embiid vs. Gobert matchup, and I hope their injury reporting process is a little cleaner than they made it seem.