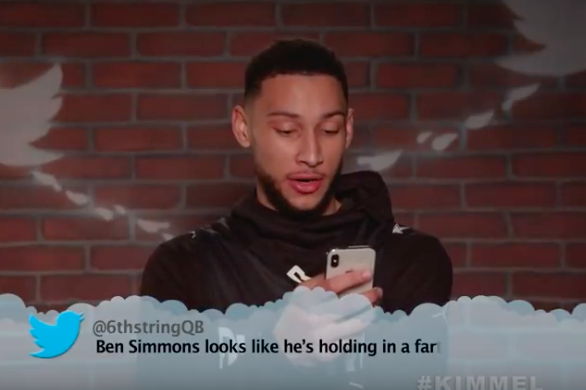 Philadelphia 76ers fans are grinding their teeth Friday morning over the start of the NBA Finals, which featured a stout Game 1 victory for the Toronto Raptors over the defending champion Golden State Warriors.

That could be the Sixers, if only the Raptors hadn't activated the magnets on their rims at the end of regulation in Game 7.

We'll have to wait until next year, but for now, we get the gift of NBA players reading mean tweets on "Jimmy Kimmel Live!"

The annual feature with basketball players as the target of the mean tweets never disappoints, and this year it's no different. Representing the Sixers are Joel Embiid and Ben Simmons, as well as Hall of Famer Charles Barkley. The Sixers' young stars are in peak form for this pastime. Barkley is, well, his usual ornery self.

As for the rest of the league's participants, we now have all the evidence we need to understand why Kevin Durant is such a sensitive man.