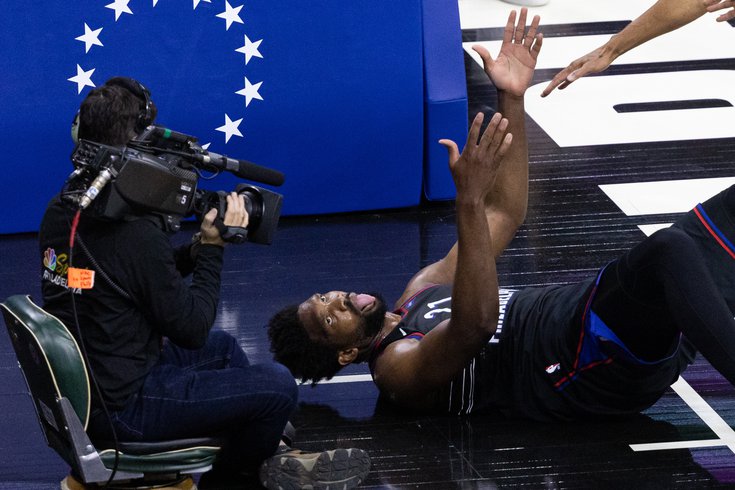 Philadelphia 76ers center Joel Embiid reacts to a television camera after a layup against the Washington Wizards in the first round of the 2021 NBA Playoffs. His celebration paid tribute to wrestling legends D-Generation X.

When Joel Embiid hit a full-speed, circus layup at the end of the second quarter of the Sixers' Game 2 playoff victory over the Washington Wizards, he unleashed a nostalgic salute to the iconic wrestling group D-Generation X.

It's a bit risqué for family entertainment — and it's not the first time Embiid has done it — but then again most preteen boys in the late 90s probably got a stern talking-to at school after casually aping what they saw every week on WWF's "Monday Night Raw." It's one of those gestures that slipped through our cultural censors and grudgingly became tolerated as a taunt that doesn't actually mean what it literally says, although it's still pretty dicey and not advisable to use in 99.99% of settings. Having said that, both women and men seem to favor saying it in proper comedic doses.

Following the win Wednesday night, Embiid told reporters that the celebration came from his adoration of D-Generation X. Shawn Michaels, a founding member of DX, is one of Embiid's wrestling heroes.

"Triple H and Shawn Michaels are my favorite wrestlers. Their group was my favorite and that's what they used to do," Embiid said. "Also, with the refs' sign for an and-1, it just makes sense to combine the both of them. I'm just enjoying myself. At the end of the day, I missed the crowd."

Joel Embiid is 27 years old and a father. "Troel" Embiid, his alter ego, is about 10 — and it's fun to see him having fun on the court, as long as the Sixers are winning.

The DX homage apparently caught the attention of the 55-year-old Michaels, who is now retired from wrestling. Michaels tweeted back at Embiid on Friday morning.

…and if you’re not down with that!!!! https://t.co/GptODkdNnF

This was probably second to an NBA championship on Embiid's list of life goals. Congrats, big guy.

Sixers fans have been enjoying the ride early in these NBA playoffs, and one devoted fan even spliced together a video mixing Embiid highlights with the iconic DX music and Attitude-era wrestling footage.

The Sixers will be in Washington on Saturday night for Game 3 against the Wizards.