Should the Sixers trade Matisse Thybulle before the deadline?

Weighing the pros and cons of moving on from the Sixers' defensive specialist. 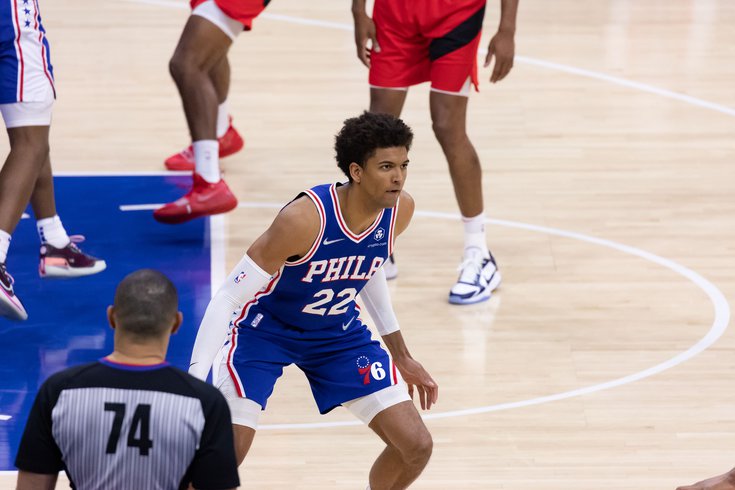 The 2023 trade deadline is only about three weeks away, and so far, there have been few compelling rumors to emerge from the slop. Whether it's a product of the play-in tournament, overperformance from a few young teams, or executives keeping their intentions hidden better than ever, we're awfully short of trade discussion in Sixers land.

And as a product of their salary structure, with several big-money guys and an army of players on small contracts, Philadelphia has few real moves to make at the moment, barring some sudden developments here and elsewhere. Matisse Thybulle stands out as one of the most interesting men on the roster, a prime candidate to be moved who may also be essential in a playoff series.

With that in mind, I wanted to look at both sides of a very simple question — should the Sixers keep or move Thybulle?

The pro-Thybulle faction in Sixers world right now is among the loudest, and in fairness to their cause, they have supporting evidence for their cause, whether you find it compelling or not.

The two main pillars of the argument are as follows:

Advocacy for Thybulle obviously goes beyond that. In fact, some of the argument rests on the underperformance of their other options. P.J. Tucker has been a nailed-on starter when healthy — well, healthy enough to be on the floor — and there have been long stretches of the year where Tucker has been ineffective or actively harmful. Tucker is in the midst of his worst season since 2020-21, a year that was dragged down by horrendous performance to start the year on a rudderless team in Houston.

(Quick sidebar: Tucker ended up being an important piece on the title-winning Bucks in the playoffs that year, so perhaps there's a bit of hope to be gleaned from that.)

With Tucker passing up open threes and being uninvolved on offense outside of occasional floor spacing and screening, you can see why some would prefer to have Thybulle in his place. Swapping Thybulle in for Tucker would make the Sixers younger, more athletic, and perhaps even a more sensible team by giving Tobias Harris full-time power-forward duties, where he has traditionally been at his best.

In the smallest role of his career, Thybulle has maintained impressive per-minute production on defense, just slightly off of his career pace for steals/36 minutes. He's also rebounding slightly better, and if you've watched the Sixers try to end possessions this season, you can't escape the feeling that adding some athleticism to the lineup could help them there.

There are encouraging lineup combinations to explore, with the caveat that they've produced their big numbers in limited sample sizes. The figure that some are holding on to — Philadelphia is crushing with Embiid and Thybulle on the floor at the same time, struggling a bit on offense but putting a chokehold on the opponent on the other end (+16.8 points/100 overall). With Embiid expected to do so much heavy lifting on offense, particularly when Harden sits, giving him a bit of support on the other end is a welcome bit of assistance, and Thybulle is their best candidate to do so.

Even if we set aside on-court measurables and immediate impact, there's a case to be made that the Sixers should hold onto any player with even remote upside for the time being. They're working from a draft pick deficit at the moment thanks to both trades and the tampering investigations from this past offseason, leaving them with fewer paths to acquire young talent. He'll be 26 in March, so he should already in theory be approaching or offering prime production, but there's at least an argument that he has better days in front of him.

You can be a Thybulle skeptic and still envision scenarios where he offers a change-of-pace off of the bench, a different dynamic to the team that they could need during this (and future) playoff runs. Teams like the Celtics boast multiple capable wing scorers, and even if Thybulle is just somebody to bring in so you can show a different look, he does give you options. Zone defense (gag) is going to be more effective with his length and activity at the top of a zone. He can make recovery plays with his speed to clean up mistakes made by others, and on the "hard to quantify" side of things, the ability to create a turnover that leads to a big dunk or make on the other end can juice the crowd up during a playoff game, flipping the energy of the building quickly.

They're trying to win right here, right now, and in spite of some warts, Thybulle can help you do that in the right role. Save for upgrading on him, it makes sense to keep him.

I find myself on the Thybulle skepticism corner for a few reasons, namely:

For this observer, Thybulle is a high-variance player who can't hit his top level consistently enough to be trusted in games that matter. And really, "Can Matisse Thybulle play in the playoffs?" is the only question that matters at this point. He has certainly proven he can be an impactful (if inconsistent) player with enough opportunities in the regular season.

A factoid to chew on: Thybulle has not been positive in any playoff game decided by single digits, for or against the Sixers. In 25 postseason appearances, the Sixers have won his minutes just four times, and each of those four games was a Philadelphia win by at least 16 points. There are a number of factors to sift through there, from wonky lineups to injuries to goofy team construction, and no one needs to remind me of the perils of raw plus/minus.  But the flips in effectiveness are severe if you put Thybulle on the floor, and it does track with what you'd expect. He can help you hit your highest highs, but you're accepting a fair bit of risk to chase those.

The starting lineup (James Harden-Tyrese Maxey-Thybulle-Harris-Embiid) that worked in the regular season last year? Eight points underwater in the playoffs. In 152 possessions with Joel Embiid and Thybulle on the floor at the same time, the Sixers were outscored by 9.5 points per 100 possessions in the 2022 playoffs, nearly 17 points worse than Embiid's minutes without him. Go back to 2021, and the swing is even more dramatic. The Sixers outscored opponents by 23.7 points/100 with Embiid on and Thybulle off during that run, boasting elite numbers on both ends of the floor, dropping to -2.4 points/100 with Embiid and Thybulle both out there.

What's happening this season? In 103 possessions with Embiid, Harden, and Thybulle on the floor this season, the Sixers are seven points worse than the opponent. Their offensive output, 98.1 points per 100 possessions, is good for the 0th percentile for all lineups in the NBA. Even in limited minutes, it's quite an achievement to make a lineup with those two stars bad on offense for any period of time, let alone hitting "throw bleach in my eyes so I don't have to watch" bad.

There are a lot of small-sample sizes here, and you could argue the 2022 playoff numbers are skewed by an ass-kicking Game 6 for the Sixers in Toronto with Thybulle sitting back home in Philly. The broader point is that the numbers say very different things depending on how and where you choose to look. He's a unique, oft-impactful defensive talent, but problematic on the other end in today's league.

Teams are bolder about ignoring non-threats from three than they've ever been, and Thybulle is a great example of that shift. Over 45 percent of his total shot attempts this year have been wide-open threes, and NBA tracking data does not have a single Thybulle three-point attempt this year categorized as tightly contested. It's something that can impact a regular-season game but the Sixers are often able to just "talent" their way around. Whether that's possible against playoff-caliber teams — who are better equipped to exploit weaknesses on both ends — is another story.

"Do you want to pay Thybulle this summer?" is as pressing a question as "Does he help you win in these playoffs?" Thybulle is a restricted free agent this summer, and another team without Embiid in the middle could convince themselves Thybulle would work better in their system with their stars. If they're prepared to offer Thybulle good money on that gamble, the Sixers could be stuck between matching the offer (and likely overpaying) or letting him leave for nothing. An asset-depleted team letting Thybulle walk out the door for nothing wouldn't be the savviest move in the world.

We'll see where the Sixers fall on this debate soon enough.