James Harden is playing his best basketball as a Sixer

Harden "won the week" in Philly sports, playing his most complete ball as a Sixer yet. 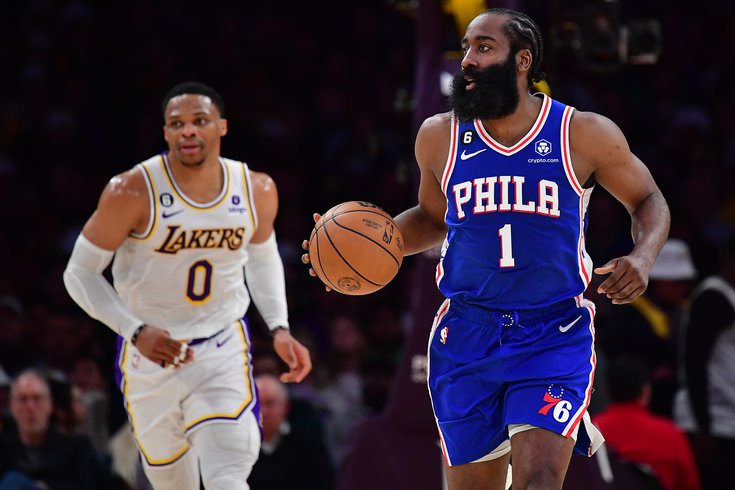 Sixers guard James Harden goes to work against the Lakers and Russell Westbrook.

Lost in Eagles mania and the team's eye roll-worthy 5-7 early season start is the fact that Sixers are currently are a half-game out of the No. 2 seed in the Eastern Conference. Joel Embiid is continuing his offensive bonanza that had him finishing as the MVP runner-up the last two years. Even more impressive for the 27-16 team is how James Harden has held up as of late despite the wear and tear of an NBA campaign.

Over the last week, the Sixers have won three of four, chipping away at Boston, Brooklyn and Milwaukee in the East standings. Harden has been instrumental in that, averaging 23.8 points, 7.8 rebounds and 13.5 assists per game while shooting 59.3 percent from the floor and 50.0 percent from deep during that stretch.

The Houston version of Harden that was putting up 60-point triple-doubles is gone, but in his age-33 season, Harden is showcasing why he's his generation's most underrated passer and playmaker, making life easier for Embiid like no Sixers guard had previously.

With the Eagles relaxing while on a bye, Harden is my choice for the distinguished honor of who "won the week in Philly sports," the first time he's ever done so after starting this feature 10 months ago.

Harden missed most of November with a foot tendon strain. The groans came out from the Sixers fan base. Harden was one of the NBA's most durable superstars for roughly the first decade of his career, but in the time since, particularly his last two trade-happy seasons, he's looked, understandably, like a guy with a whole lot of miles on the odometer. There was the hamstring injury in Brooklyn that Harden hadn't really recovered from once he came to Philly, delivering a good-not-great end of the year and playoff run.

Against everything the basketball world knows about scheduling, rest and player aging, Harden went off in back-to-back nights on Saturday and Sunday, lifting the Sixers to two wins to open their West Coast road trip. In Utah, Harden dropped 31 with 11 assists. Against the Lakers, he and Embiid took down LeBron James and his former teammate Russell Westbrook, putting up a 24-7-13 line in the W. Only having two turnovers in each of those games is, of course, huge as well.

Any Sixers fan worried about Harden playing too many minutes so far this season has a justified concerned. No fan base is more attuned to the horrific fate of basketball injuries than the Sixers. Harden's 37.2 minutes per game are the most he's played since he was 26 in 2016. To illustrate how long ago that was, Embiid hadn't even played in an NBA yet. It's great to gush about Harden's January play right now, but if he's lagging in another second-round exit come May, no one's going to care he was averaging for 24 and 14 for a stretch.

Trusting Doc Rivers to handle this deftly might be a losing proposition, akin to Wile E. Coyote loaded up with dynamite, but it's literally his job to harness this iteration of Harden over the next two-and-a-half months, giving the Sixers a top-three playoff seed and a healthy Harden ready to go ballistic in the playoffs.

Harden's evolution as a playmaker, averaging more 10 assists for the third-straight season while posting the second-highest assist rate of his career, is paired with the realization that he doesn't need to be more (or, frankly, can't be...) the dominant scorer he was during his MVP days with the Rockets.

The amount of shots from the field and threes he's taken has dropped since he left Houston. Harden's gone from averaging 12.9 three-point attempts per night when he won the scoring title in 2019 compared to "just" 7.4 this season. Harden was never an elite shooter despite his historic scoring, hoisting a ton of threes at roughly a league average rate and his uncanny ability to get to the free throw line to average over 30 a game. While his volume has fallen, his efficiency has risen. He's made 38.9 percent of his threes this year, his highest mark since he was coming off the bench back in Oklahoma City in 2012.

Given the unpredictability of Harden's postseason play and given that he suits up for an inherently hair-pulling franchise come the playoffs, I obviously can't say for sure if Harden will be going for 25 and 14 nightly against the likes of the Celtics and Bucks when the games really matter. Perhaps I'm foolishly buying into the latest edition of the January Sixers, but I have more confidence in Harden resembling the legitimate playoff guard the Sixers have been lacking since 2001 than I did two months ago.

All that's left for Harden is to deliver the Sixers their first trip to the Eastern Conference Finals in 21 years or otherwise look hopeless in yet another second-round burnout.