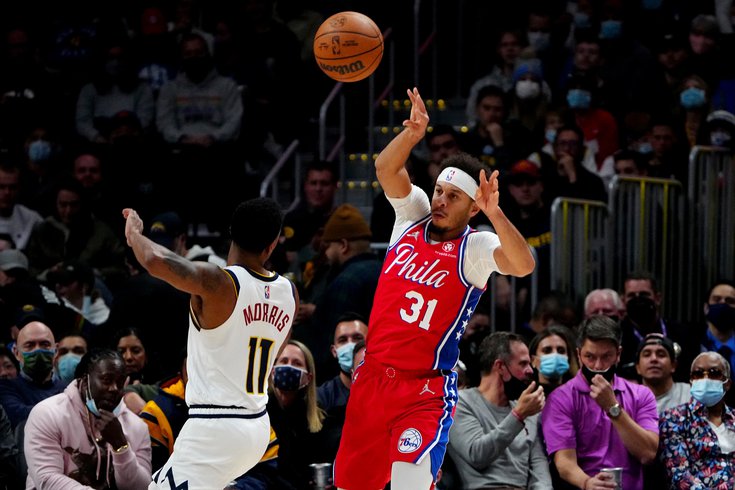 The Sixers snapped a five-game losing streak and pulled out an excellent road win over the Nuggets on Thursday night, riding a total team effort to a 103-89 victory.

• You can make a lot of money and build a long NBA career out of a quick first step. Tyrese Maxey is proving to be much more than that initial burst of speed, but man, what a burst of speed it is when he initiates from the perimeter, leaving unprepared defenders in his wake as he flies toward the rim.

It's not like Maxey was up against slow or small defenders who he could just bully past all of Thursday night. On one first-half possession, Aaron Gordon gave him a brief window to attack and Maxey was gone before Gordon could even react, floating past Nikola Jokic for a smooth finish at the rim. He is learning how to pick his spots more effectively over time, getting easy buckets at the rim more often than when he first entered the league.

(This shows up fairly often immediately after Maxey catches a swing pass. It's as if he has already left the space before the ball has arrived, which helps him either find a clear path to the rim or draw attention toward him for an easy kick to the strongside corner for an open three.)

Then there's the pull-up jumper, which will basically determine if Maxey tops out as a good rotation player or someone with much higher aspirations. As teams continue to sink against him and prepare for that burst of speed, Maxey is punishing backpedaling defenders, hitting pull-up threes to round out his offensive package:

There are positives for this kid every single night, win or lose.

• Charles Bassey has finally started to get a chance to play on this road trip, and you can see the base of talent that's there even if he's rough around the edges. He is a big, physical dude who makes other teams feel him when he sets screens (perhaps too much so, even) and is willing to go after basically anything around the rim on both ends of the floor. That can have disastrous consequences on occasion, with pump fakes drawing him up into the air with nowhere to go, but there are fewer mistakes than you'd expect from a guy as inexperienced as Bassey.

Honestly, Bassey looks like the sort of guy any coach would want to try to develop — big and athletic with no shortage of effort, and an understanding of what he's supposed to do. He was a defensive menace in the first half of Thursday's game, first against Denver's smaller backup unit, who tried to attack Bassey at the summit and promptly got rejected.

Pulling off the same against reigning MVP Nikola Jokic is a much taller task, but Bassey blocked the Joker all the same when he first tried to take him down to the post. Jokic's high release makes it really difficult to get in his airspace, and Bassey managed it. There were a couple of cheap fouls against Jokic from the rookie, but he held his own about as well as you could expect in the situation, showing strength and length and just enough discipline to win battles.

Bassey's work on the offensive end is a work in progress, but because of the aforementioned screen-setting ability, he was able to free their ballhandlers up to get a few clean looks at the rim on lobs, and he even sprinkled in a nice step-through move to cement his first offensive highlight in the NBA.

Being able to run standard middle pick-and-rolls with a big who can finish them and is bought into doing his job is a big deal for this team. You don't need to attach any caveats to this claim: Bassey was just better than Andre Drummond on Thursday night. Maybe he would have wilted in a higher-volume role against Jokic, but he did what he needed to do when he was on the floor.

• Big ups to the bench group for getting the Sixers rolling on Thursday night after a slow start. Shake Milton's first half is one of the more impactful stretches I think he's had this season, and though it wasn't especially prolific in the box score to start, he played calm, composed basketball at backup point to get Philly moving in the right direction.

If there's one thing Milton has done consistently over the last few years, it's build meaningful chemistry with big men who are roll threats. He was quick to strike a partnership with Dwight Howard last season, and Milton looked like a natural fit running sets with Bassey, who drew attention rolling toward the rim and gave his ballhandler multiple options on a given play.

Everybody looks good when their shots go down, obviously, but this was a night where decision-making was king for Milton, and by extension, the entire second unit. The ball rarely stuck on Thursday night, and the hunt for better shots was both a credit to Shake and a style that benefitted his individual looks.

• The Sixers look a hell of a lot better when Seth Curry is in the mood, and after a recent swoon, he was back to hitting difficult shot after difficult shot against the Nuggets. Curry still struggled to get threes to drop against the Nuggets, but he absolutely unloaded on them inside the arc, hitting tough midrange pullups and even a few high-difficulty runners, including a peach that he banked in high off the glass.

Even before Curry got rolling, the Nuggets were showing him a level of respect befitting his numbers this season, and Curry used that attention to pick apart the Nuggets as a passer, threading some nice passes in between hedges and swinging the ball to the open man instead of jacking up contested shots.

One thing I liked for both Curry and the second unit — Curry running with Milton in the backcourt against Denver's backups. Philly's backup units had a ton of spacing at basically all times against the Nuggets. And since Curry is typically the guy lifting everyone else up with his spacing, it's gotta feel good when he's able to find pockets of space because of the other shooters on the floor drawing attention. The power of a few hot hands.

• I thought Tobias Harris really struggled to find his place in this game for about 2.5 quarters, tripping up the offense and bringing things to a stop far too often. But there were a number of moments in the second half where he came through with a bucket when they badly needed one, using that isolation scoring ability to break Denver's momentum and keep the Sixers running out in front.

• You can't call any game in mid-November a "must-have" game, but this was a game the Sixers needed for spiritual purposes after a tough week-and-a-half. Those weary legs will feel a bit lighter after getting a comfortable win in a tough place to play.

• Andre Drummond had the unenviable task of guarding the reigning MVP who is arguably playing even better this season, but his recent play is a disappointment even within that context. The more Drummond is being asked to make decisions and defend in space, the more out of sorts he looks, and the more defensive breakdowns we see.

No matter what Jokic did or where he tried to move Drummond on the floor, it was as if Drummond had the exact opposite reaction that was required on the play. Jokic beat him to the rim with slip cuts, punished him for slow closeouts on the perimeter, worked a two-man game to bury Drummond after an early gamble attempt, it was downright ugly whenever the two shared the floor.

If Drummond was making up for any of that on the offensive end, you could overlook the warts, but that's simply not happening right now. Drummond's lack of touch is letting him down in situations where he's done most of the hard work, sealing off an opposing big or beating them down the floor only to flub the layup attempt. Perhaps an old school Mikan drill is in order.

• I appreciate effort plays as much as the next guy, but if saving the ball means throwing it to the other team with a chance to score an uncontested layup or dunk the other way, just eat the turnover and get back after the quick stoppage. Georges Niang had two brutal turnovers in the span of about 90 seconds in the fourth quarter, and he knows better. Live to fight another day.

• Love the headband look for Furkan Korkmaz with the longer hair. If he ever throws another transition behind-the-back pass to the corner for a turnover like he's Pistol Pete Maravich, he should be banned from wearing the headband for at least one week.

• As Samuel L. Jackson's wallet said in Pulp Fiction, Nikola Jokic is a bad motherf--ker. Not really sure what you're supposed to do against him right now — he's too big to stop on the block, his touch at odd angles is immaculate, he hit a three off movement (in addition to another pair of triples) in the first half, and he's one of the best passers on the planet. An absolutely ridiculous basketball player.

• The remote broadcast strikes again: going to an innocuous replay as Denver head coach Mike Malone stormed the court and got thrown out of the game was simply brutal.

• Up 20 points with four minutes to play and Denver's backups on the floor, the Sixers could have gone with a more bench-heavy group to end this one.