Where Tyrese Maxey can still grow in midst of breakout 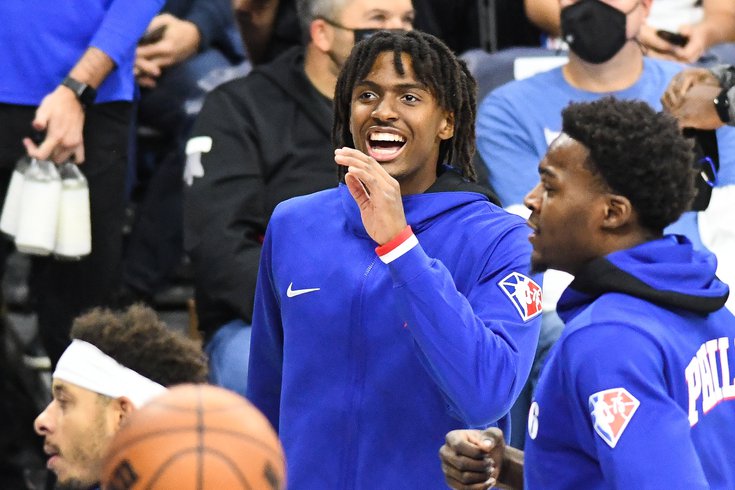 If you're panicking about the Sixers' five-game losing streak, I would urge you to walk away from the ledge. Yes, if the Sixers go into a playoff format with Joel Embiid, Matisse Thybulle, and Danny Green all out, with the Ben Simmons trade scenario still unresolved, they are likely in a fair bit of trouble (and would struggle to get into the playoffs in the first place). But presumably, they'll get reinforcements fairly soon, start looking closer to a normal team, and take advantage of the schedule softening when they get through this hellish run in about mid-December.

In the meantime, Tyrese Maxey's performance is worth considering not just for what it means regarding his future, but the team's immediate and medium-term plans for the roster. Early on this season, Maxey's position in the starting lineup was an open debate without Simmons available, and there's a decent chance he would have ceded that spot if Shake Milton came into the year healthy. But Maxey has proven impossible to bench, both because he has taken a leap forward and because developing him takes priority over whatever fit improvement another player might provide.

The declaration from Maxey optimists has been clear over the last two weeks: "The Sixers don't need Simmons, they have their point guard of the future!" That's more than a little overzealous, obviously, but that is the sort of thinking the Sixers need to evaluate behind-the-scenes. From a pure size perspective, Maxey is only going to be able to guard pure ones and small two guards moving forward, so if they slot him into one of those spots in the lineup, it is going to force them to make tough choices elsewhere.

Putting Maxey next to Seth Curry in the backcourt was marked as a potential concern entering the season, though that has not necessarily matched up with the on-court results when Philadelphia is healthy. The new starting five (Embiid-Harris-Green-Curry-Maxey) has outscored opponents by over 17 points per 100 possessions, according to Cleaning The Glass, and the defense has been around the 67th percentile, with Embiid doing most of the heavy lifting on the back end. With proper staggering and improvement from the bench over last season's often disastrous play, that's enough to go to war with.  That group ranks fifth in net rating of all lineups that have played at least 100 possessions together this season, we're just a long way from figuring out if that's sustainable or not. A look at the current Cleaning The Glass top five will show that better than I can:

(Due respect to the Knicks bench mob, but I don't think they're going to play all-time great defense and elite-level offense all year.)

Sticking with the Sixers, though, if the argument against the Maxey/Curry backcourt is, "they need Embiid behind them to make it work," you have effectively described the entire roster. He's the highest-echelon talent they have on the team, and unless they are able to acquire another, their fortunes rest on his shoulders. I think you would struggle to find a combination of players that work better for the Sixers as currently assembled. There's a good base identity and counters they can throw if their primary options get jammed up.

But for Maxey to stick in the starting lineup after a potential Ben Simmons trade, if we assume one is coming, you essentially have to assume Danny Green is being bumped out of that group. That's quite alright with me, even with my pro-Green leanings, but there are consequences to that in any potential deal. If the best player you get back is another small-ish guard, and I can think of one in Portland they like quite a bit, you're suddenly staring down a situation where several of your best players are small guards and potential targets to be hunted in a playoff format. Even if you slide Maxey (or even Curry) into a sixth-man role, which I think could benefit the starters and the bench, that leaves you with potential defensive targets on the floor at basically all times, which has been the kiss of death for Lillard's Blazers throughout his run there.

(Granted, Lillard has never had a guy like Embiid to save the day when things go south on the perimeter. I digress.)

It makes you wonder whether the Sixers might prioritize going after a big wing instead, should the option be there at an equivalent or better price. Execute, for example, a Simmons for Jaylen Brown swap, and you can stagger pairs of starters with the bench unit in a way that always leaves you with some defensive cover. Still, there are multiple problems to consider. Everybody wants two-way wings in today's NBA, so they won't come cheap, and a trade for a wing might not solve Philadelphia's playmaking deficit, which has been worked around so far but might come back to bite them later.

On that front, Maxey has taken care of the ball at an expert level so far this season, but some of that comes down to the conservative nature of his playmaking. His usual reads don't tend to be the skip pass to a corner shooter or wrap passes through traffic after drawing the defense toward him and the rim. When Maxey gets downhill, he's almost always looking to score, and that's fair enough given his success at it this season. But creating for others is going to be a big priority for him the deeper into the season they get. Asking Embiid to consistently create looks for others out of the post is a tall task in crunch time.

It's important to separate "passing" from "vision" here. In the former category, Maxey has shown a lot this season, threading the ball through traffic and showing increased competence in areas like entry passing and ball placement, where he's hitting guys right in their shooting pockets and simplifying the release process. This pass against the Pacers last weekend is a good example of his ability to simply make passes:

His vision, on the other hand, skews more toward competent. Most of his assists are passes to the closest man, which is part of why his assist-to-turnover ratio remains pristine. There is a line of thinking amongst scouts that low turnover numbers aren't always a good sign for young guards, as they denote a lack of risk-taking that caps their ceiling as initiators. This may be as simple as striking a balance — Maxey was a frequent lob passer at the amateur level, and he may have to turn some of those twos into threes when he sees weakside defenders tag the rolling big.

The other main area to watch right now is, as you might expect, the shot. Maxey has been on a roll in recent weeks, but it's his willingness to shoot and play different roles within the offense that will determine his ultimate level. Buried within the blowout loss to Utah was this play, a pick-and-pop with Tobias Harris initiated by Maxey that ends with him relocating to the corner and taking a relatively clean catch-and-shoot three:

The mechanics and mentality are much more important than the result here. Maxey drifts to the spot instinctually and maintains good form while getting a shot up in one fluid motion. It's an important play for a bunch of reasons, but mainly because it shows him finding comfort in his off-ball place in the offense, flowing in and out of responsibilities at a moment's notice.

There were stretches in the Utah game (and plenty of other games this season) where Maxey is either being used as a Green type standstill player or the uptempo, downhill menace with the ball in his hands. He doesn't own all of the responsibility for that, with the coaching staff needing to trust and use him in more ways, but finding a way to make an impact without the ball is the first hurdle a lot of players have to clear as they adjust to life in the league. If Maxey ends up being called a combo guard simply because he's an on-ball scorer masquerading as a point guard, that would be problematic for the Sixers.

Plays like these, then, are encouraging, and the above look can be run quite easily with Embiid, who needs to be able to trust Maxey as a spacer for the offense to continue humming for this group.

And then there's the obvious stuff, like pull-up shooting from three, that we've focused on from the very beginning. Maxey's pull-up numbers from three are encouraging in both volume and efficiency so far this season, and sustaining it to make defenses respect him enough to go over screens is how he takes his own game (and the offense) to another level. For now, opponents are still comfortable trying to go under the screen against Maxey, which he has begun to make them pay for early in the year:

Defense is another can of worms, but that's a side discussion for another day. Maxey has improved in basically every measurable way this season, and there are hints of progress even in the areas where he's been slower to develop so far. At just 21, Maxey has a lot of growth left, and given his reputation as a worker, he's at least giving himself a chance to figure it all out eventually.