Simmons' team blames Sixers for 'negative publicity' — but where are those leaks actually coming from? 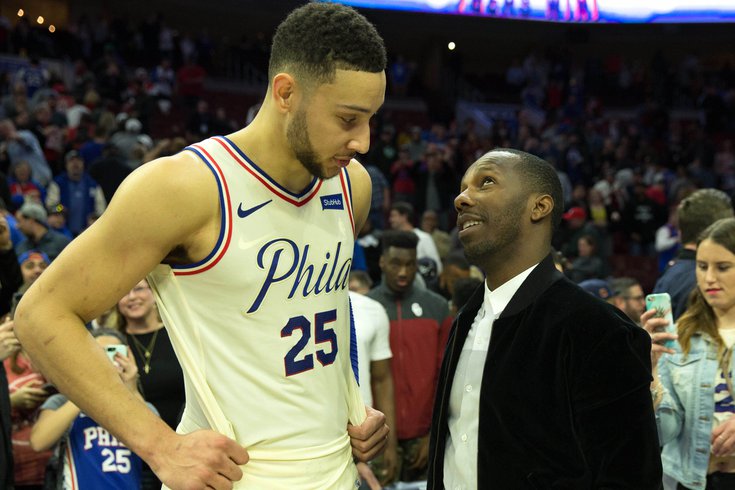 The state of Ben Simmons’ mental health is not up to the public to decide. Whether you believe him or not — and many have tried to use Simmons’ on-court tendencies and off-court life to psychoanalyze him from afar — we wade into dangerous territory whenever circumstantial evidence is used to sum up someone’s frame of mind.

Simmons’ people know this better than anyone. And still, their choice is for the latest leaks and on-the-record performances from agent Rich Paul to push this situation in a direction that benefits absolutely no one.

Midway through Philadelphia’s loss to the Toronto Raptors last Thursday night, Shams Charania of The Athletic dropped a story detailing the Simmons camp’s current assessment of the situation:

Ben Simmons believes the Philadelphia 76ers’ recent actions are exacerbating his mental health issues, and that the team wants to deem him fit to force him to play, regardless of what he tells the team’s mental health therapist, his agent told The Athletic on Thursday.

“I truly believe the fines, the targeting, the negative publicity shined on the issue — that’s very unnecessary and has furthered the mental health issues for Ben,” Klutch Sports CEO Rich Paul said. “Either you help Ben, or come out and say he’s lying. Which one is it?”  [The Athletic]

Monday evening, it was Charania once again relaying the news that the Sixers would be fining Simmons for skipping out on the team's road trip out west, delivering the information through a short video clip on Twitter:

The Philadelphia 76ers have fined Ben Simmons for failing to travel on their six-game road trip, sources say. Details: pic.twitter.com/PEStgby08j

Take 10 seconds to think about it — who benefits from word getting out that the Sixers continued to fine Simmons? The agent who said days prior that fines and negative publicity are harming Simmons' mental health or the team who is looking to get Simmons back on the floor either to help the team win games or boost his trade value?

So let's remix Paul's question and direct it back to him. Either you believe “the negative publicity” is harming your client’s mental health, or you continue to wage an ugly public relations battle in the hope you can swing favor in your direction. Which one is it?

As a matter of record-keeping, it was Simmons’ side which came to the Sixers first this summer and expressed the desire to be moved. It was Simmons’ side who came to the table in an August meeting and told Sixers power players he did not want to be a Sixer after they made attempts to move him following said request. It was Simmons who no-showed the start of training camp and invited further scrutiny, Simmons who mailed it in at a preseason practice to the point of being kicked out, and Simmons who showed up out of the blue outside of the Wells Fargo Center, arriving in the middle of a game unannounced despite constant communication between the organization and Rich Paul prior to that moment.

(We could hit a few more, but you get the point. It's also not an accident that many of these distractions and news drops have come in the middle of Sixers games and practices.)

The Sixers are far from blameless in this process. There were the Embiid and Rivers comments from after Game 7, oversold though they may be. More importantly, there is the naivety that this situation could be smoothed over in order to bring Simmons back and actually benefit from it, an idea that seems crazier with each passing day. You can credit the Sixers' management structure for being in lockstep throughout this process, with every level from the floor to the owner's suite empowering Morey to let this drag on in search of a franchise-altering offer or change of heart from Simmons. Ultimately, though, evidence continues to mount suggesting reconciliation is a delusional fantasy.

But at least the Sixers have been consistent. Trading Simmons has always been contingent on getting a level of player back who would meaningfully change their fortunes. It’s why they pressed hard for James Harden last year, even though that in itself may have been delusional, with many still insisting today that the Rockets were never going to trade him for Simmons specifically. Regardless, it was an opportunity for Philadelphia to acquire a perennial MVP candidate, Harden’s slow start to this current season notwithstanding. Once it became clear a deal of that sort was unavailable to the Sixers this summer, the team delivered a clear message to Simmons — we’d rather have you in the fold than trade you for an unsatisfactory return.

The messaging from Simmons’ side has been scattershot by comparison, save for one important detail. They have insisted they are willing to do whatever it takes to get Simmons out of Philadelphia, and that his holdout would continue as long as is necessary. But each time the checks have stopped clearing, suddenly there is newfound energy to kick up dust and target the Sixers as the instigators of this standoff. All is quiet on the Simmons front until and unless the money stops rolling in.

While conceding that Paul protecting Simmons' money is basically his whole job, the focus on the dollar in this process is laid out several times by Paul in Charania's story.

“In this case, we have to get Ben help and not put finances above mental health,” he says at one point in the story.

At no point in this process has mental health been presented as an either/or proposition with playing. The Sixers' recent requests have been no different than an employer asking for a doctor's note to excuse an employee's absence.

If the Sixers were denying Simmons access to treatment, violating his privacy, or actually doing something that runs afoul of Simmons getting right, that would be front-and-center in Paul's argument and would deserve to be there. Attempts to disrupt mental health treatment would be shameful and most likely illegal. But with Simmons requesting confidentiality regarding communication between his doctors, rightfully so, at no point has Paul suggested or even hinted the Sixers have violated or invaded that mental space Simmons needs to better himself. That in itself is a tell.

Then there's the desperate attempt from Paul to compare John Wall's situation in Houston to Simmons' in Philadelphia:

Paul drew a contrast between the situation with Simmons and that of Houston Rockets guard John Wall, another of his clients, who is being paid by Houston while sitting out the season, even though he is healthy enough to play. “John is able to play, b Houston is OK using the (Collective Bargaining Agreement) to pay him not to play,” Paul said. “So which way is it? John is perfectly healthy and ready to play, and it’s OK in the CBA. We are being professional with both instances, but how can it go both ways? John and the Rockets have been professional about their situation, and we are also expecting the same with the 76ers.”  [The Athletic]

In case Paul needs someone to explain the differences for him:

Those points are without getting into the subjective debates. Given his practice outburst upon returning, you could easily refute the suggestion that Klutch is, "being professional with both instances." But that's neither here nor there.

To date, the defining feature of Team Simmons seems to be misreading the situation and their power. Simmons’ attempt to force his way out of Philadelphia with four years left on his deal has been watched closely not just in the organization, but around the league. Other franchises and the league office are keeping a watchful eye on what they feel could be a precedent-setting situation.

None of that would matter if Simmons was the sort of player who could command an elite-level offer regardless of his displeasure. Treating Simmons as if he was equal to a number of MVP-level players who have forced the hands of other teams in recent years, Paul and Klutch thought they'd have the same success. But other executives watch the playoffs too, and the godfather offer Daryl Morey has held out for hasn’t materialized after Simmons’ public meltdown last June. That’s not to say it won’t, but sifting through what we know about the suitors around the league, you can read the tea leaves easy enough — Simmons is viewed as an additive piece who can raise the level of an established core, not someone you clear the decks for.

When James Harden showed up to Houston out of shape and unwilling to work, it was a nightly story because he was the best player on a team who once took the apex Warriors to the brink. When Anthony Davis began forcing his way out of New Orleans, it was a constant story because the Pelicans had (and still have) zero ability to win without him. Even if his contract was closer to winding down, Simmons doesn't have that sort of juice, no matter how many people he has tried to condescendingly shrug off over the years for questioning the limitations of his game. The story makes waves each time Simmons and Paul try to get loud about it, but the basketball world moves on to debating bigger fish quickly enough. Most people would rather stare in awe of Steph Curry or debate LeBron's ability to carry the sad-sack Lakers or track Dame Lillard's happiness (and slump) as management is put under pressure in Portland.

So until team Simmons is ready to take this to arbitration, which feels like a likely ending at this point, they are living the life of a Marlo Stanfield enemy. They want it to be one way, but it's the other way.