What questions do Sixers still have as preseason nears its end? 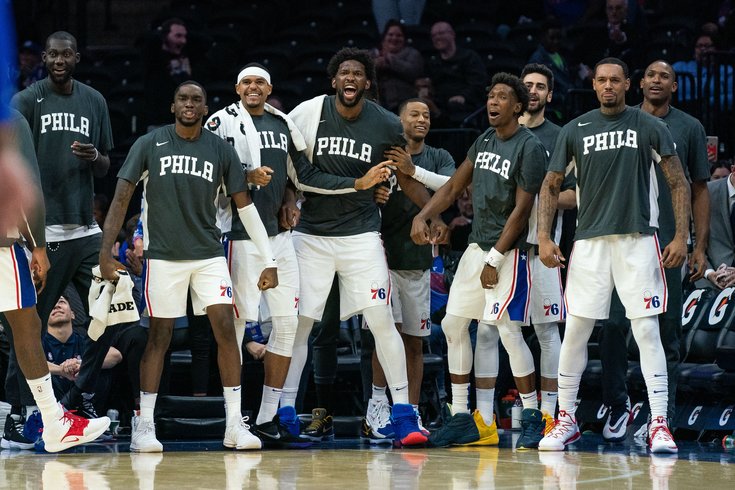 The Sixers' bench still has some question marks as the regular season nears.

They aren't quite out of the woods yet, but for the first time in a long time, the Sixers have progressed through the preseason like a mostly normal basketball team. There has been a different vibe around the team than in years past, as the players prepare for the burden (a good one, mind you) of being expected to contend for a championship from the outset of the season.

Philadelphia's first game against the Boston Celtics, if you can believe it, is just a week from today. A lot of answers coming into the preseason were answered rather quickly, thanks to the emergence of rookie wing Matisse Thybulle, but there are a few left unsettled heading into the year.

Who will win the backup point guard job?

Philadelphia's bench roles are mostly settled at this point. James Ennis and Mike Scott are the incumbents, Matisse Thybulle is the young contributor, Kyle O'Quinn is the veteran big who will soak up minutes when Joel Embiid and Al Horford both need to rest. Behind the starting five, that's a pretty solid group.

They are currently missing a point guard, and that job is still there to be won, Brett Brown explained to reporters before Tuesday night's win over the Pistons.

We'll get to Richardson in a second, so let's focus on Neto and Burke, who have been given the biggest opportunities to take their chance and run with it. Neither has blown away the competition, and it seems as though it's going to come down to a matter of stylistic preference on the head coach's behalf.

This is why I believed it would ultimately be Neto's job when projecting this battle in the offseason — he checks more boxes for a head coach looking at both sides of the ball. The case for Neto is a simple one. He's solid, if unspectacular, and he's the only guy with a case for helping you on both ends. We've seen him bother Burke a good deal throughout camp and at the team's Blue & White scrimmage, and Neto's defensive superiority has been clear against hostile opponents, too.

Burke has some advantages on the stat sheet, but some of those can even be explained by his style of play. He has yet to register a turnover in the preseason, which is great, yet it's fair to wonder if that's simply a function of his iso-heavy play. He has shot the ball better from outside in a very small sample, but Burke has been less efficient overall, and the ability to fill it up is supposed to be his big point of separation from Neto.

Friday's game against the Wizards should be telling. The Sixers will presumably be ramping things up to prepare for the regular season and help everyone settle into roles, so the first guard to come off the bench could be a big tell on Brown's part. Unless, of course, Brown goes a different route.

What is Josh Richardson's ideal role?

For anyone who watched him play for the Heat, Richardson's defensive capabilities are well-known. Brown has compared pieces of his game on that end to players he admires a great deal, invoking the names of Bruce Bowen and Gary Payton while talking about Richardson's ability to slip through or around screens and continue hounding somebody on defense.

Offensively, the trick for Philadelphia is going to be figuring out the ideal role for Richardson on offense. How much responsibility is too much for him to handle? Miami ran into a wall with Richardson masquerading as a No. 1 option last season, and that's clearly not in the cards for him here.

But Brown has experimented with how he'll use Richardson during the preseason, and against Detroit, we got an extended look at Richardson in a point guard role. From this viewer's seat, it was a mixed bag. Richardson was able to bully some smaller defenders, a la Derrick Rose, but the Sixers' offense stalled out at times, leaving Joel Embiid to bail the unit out with some good shotmaking.

A fair critic of his own play, Richardson graded his performance a 6.5/10 against the Pistons and explained what he needs to get to excel in that capacity moving forward.

"Just getting familiar with the calls, so when in certain situations I can call different stuff, instead of just calling like one or two plays the whole game," Richardson said Tuesday. "I think in Miami it was a lot more ball-screen oriented, that's probably the biggest difference."

Early on in training camp, Brown hinted at the possibility of Richardson playing point guard minutes eventually but noted it was something he wanted to look at down the line rather than an early priority. His willingness to try Richardson there in extended minutes on Tuesday — and the quote praising him specifically with the job up in the air — seems to suggest he could be moving off of that stance.

There are numerous potential concerns with going this direction. The most obvious is that it would change the presumed sub-patterns and lineup combinations in ways that may not benefit Philly. Richardson-Embiid is a duo that has been attached at the hip a lot this preseason, but using Richardson to spell Simmons would all but guarantee that pair would see fewer minutes together, leading to more minutes for the jankier Simmons-Embiid pair with bench players between the pillars.

(From the right angle, perhaps that could be viewed as a positive side effect. If the Sixers are going to build a potential dynasty or even a multiple-time champion, it will hinge on Embiid and Simmons syncing their games, rather than simply co-existing.)

Richardson has never been a part of a team with this much high-end talent, and the mission this year will be to find that happy medium between an overqualified three-and-D player and a primary initiator out of his depth.

How will the big men be rotated?

Aside from a poor showing against the Detroit Pistons, Kyle O'Quinn has been one of the nice surprises of the preseason for Philadelphia. He has looked at home in Philadelphia's system, and his competitive fire has been part of setting a professional tone at the practice facility.

(An off-color example: during Tuesday night's game against Detroit, O'Quinn committed a turnover and then compounded the mistake with a foul on the other end. Looking down at the ball and then off into space, O'Quinn yelled, "Fuck, KO!" at himself, drawing a hearty laugh from the folks seated on the baseline. It is not the first time we have seen him react passionately after a mistake or taking a minor loss.)

But O'Quinn's responsibility on this team is still hard to pin down. My first guess would have been O'Quinn playing mop-up duty on nights where Embiid and Horford both feature and then stepping in as the primary backup big when either sits.

Brown has gone a different route. The head coach has consistently played something resembling a real rotation in the first halves of games during the preseason, and O'Quinn has been used as somewhat of a bridge between lineups when the Sixers go to their bench. Perhaps we should have seen this coming — O'Quinn has been pretty transparent about last year being his toughest year professionally, buried on the bench behind two talented young bigs in Indiana. If he wasn't expecting to have a real shot to play every night in Philly, I suspect he wouldn't be so fired up to be here.

"We're pliable, we can do some different things," Brown said Tuesday. "I think that I can move people around based on who we're playing and based on who's playing the best. For instance, use Kyle O'Quinn, maybe he's playing that well that I don't always, and I did have in my mind, you're going to have Al Horford be Joel's backup five and that's that position sold, which is pretty good. Maybe Al can play a little more four and Kyle can slide in because maybe one of the wings isn't playing at the standard I want them to."

If the mission is to keep Joel Embiid healthy for the playoffs, keeping his minutes per game low is as critical as giving him full rest days, and O'Quinn can help accomplish both.

Sorting out the coach's challenge

I doubt this will last long, but Brett Brown is now 100 percent on coach's challenges so far this preseason. He got a foul overturned on Tuesday night, and though nobody outside of Orlando was able to see a functional broadcast of the Orlando Magic game Sunday, it was relayed that Brown was successful winning a challenge on the road, too. The head coach was prouder of that call, which allowed the Sixers to get a two-for-one situation at the end of a quarter.

There are a lot of angles to consider here. For the entire league, this is a feeling-out period. It's a bit tougher to get a handle on than in football, where challenges often have game-shifting consequences and certain types of challenges are frowned upon for low success rates (looking at you, ball-spotting challenges).

Leverage is the name of the game here, Brown says, and they're on a mission to figure out how to create it. The natural assumption is that it might be toward the end of games, but unlike with the NFL's replay rule, NBA teams are required to use a timeout to initiate a challenge, successful or not. This creates a different calculus.

Brown says the Sixers are investing real resources in establishing best practices. He'll have a dedicated man behind him on the bench leading this task, who he compared to New England Patriots assistant Ernie Adams, the man responsible for aiding Bill Belichick on replays. Other arms of the organization will be involved in figuring out the path forward, and one of Brown's big questions right now is how uniform they can make the process at home vs. on the road.

"Part of the league discussion going to be in some venues, you better have equal access to WiFi, as an example," Brown said. "Maybe other arenas from a homecourt perspective have something a little bit more technologically advanced, which doesn't sit so well in the playoffs."

There's one resource we know Brett Brown won't be using much when deciding how to use his coach's challenge this season: input from his players. Most guys on the court tend to believe they've never committed a foul before, and Brown thinks he won't be taking a whole lot of time to consider the on-court analysis when deciding how to use his challenge.

As Brown joked to reporters on Tuesday night, "I'm not going to players to say, tell me the truth — was it off you?"