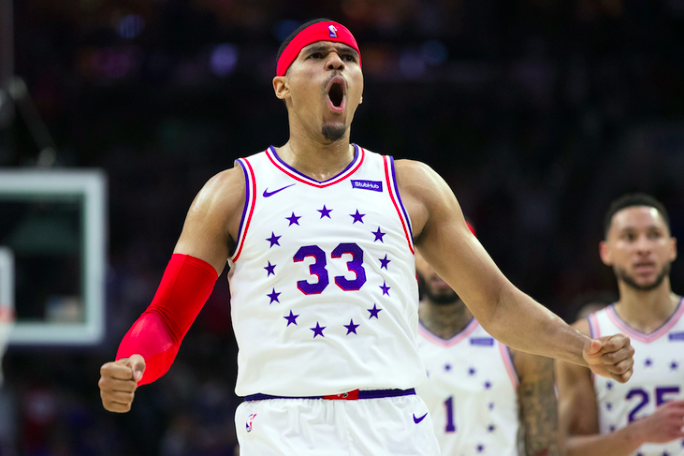 Sixers forward Tobias Harris has maintained a regimented sleep and neurofeedback schedule through his 7-year NBA career. He foresees the NBA facing a sleep deprivation crisis similar to the NFL's issues with concussions.

Philadelphia 76ers forward Tobias Harris believes the NBA has a major problem with sleep deprivation that will soon become as prominent as the NFL's concussion dilemma.

Harris shared his thoughts in an ESPN feature on the NBA's "dirty secret" of poor sleep health among its players, some of whom said they average as little as three or four hours per night during the 82-game season.

The interview took place early during the 2017-18 season, when Harris was still a member of the Detroit Pistons.

"You ask anybody in the room," Harris said in the locker room. "The thing I talk about is sleep. I think in a couple years [sleep deprivation] will be an issue that's talked about, like the NFL with concussions."

Harris was so insistent on maintaining a healthy sleep regimen that his teammates ragged on him:

"Some guys joke, 'Oh, you have a bedtime,'" Harris says, dodging the shade. "But I've got to be able to function the next day at the top level." This is how Tobias Harris rolls: On off-days, he'll make sure he's done with everything by 6 p.m. so he can be in bed by 8:30 to achieve his nightly goal of nine hours of sleep. On game nights, he kick-starts his recovery as soon as the buzzer sounds. At his locker, he'll strap a breathing belt around his waist and slip a heart-rate monitor on his index finger. He knows the game has caused his body to release cortisol, a hormone that wakes him up, while suppressing melatonin, the hormone the body naturally produces to regulate sleep.

The National Sleep Foundation recommends adults get anywhere from seven to nine hours of sleep each night. It's best if a consistent bedtime is maintained, allowing the body and mind to be regulated by a schedule.

But the NBA calendar, with frequent trips across timezones and late tipoffs, isn't amenable to healthy sleep that goes the the fully REM cycle.

Harris takes his functioning so seriously that he carries an electroencephalogram machine with him to do neurofeedback. He monitors his brain waves to see whether he's able to maintain optimal focus.

Experts interviewed by ESPN suggested the NBA's sleep problem is ultimately hurting players' performance and exposing them to greater injury risk. It might even be shortening their lives.

They also acknowledge sleep deprivation is a problem for shift workers and others across the United States, which has seen average work night sleep fall from eight and a half hours to less than seven, according to research from Boston's Brigham and Women's Hospital and Harvard Medical School.

The NBA is beginning to take notice, but it's unclear how much the schedule adjustments for the 2019-20 season will help. The league has reduced the average number of back-to-back games to 12.4 this season, down from an average of 19.5 five years ago. Tipoff times will also be moved up to reduce the number of 10:30 p.m. starts that often feature West Coast teams on national television.

NBA Commissioner Adam Silver acknowledged in May that that the rigors of the NBA schedule have to be addressed, but in the meantime, players such as Harris have taken their sleep health into their own hands.