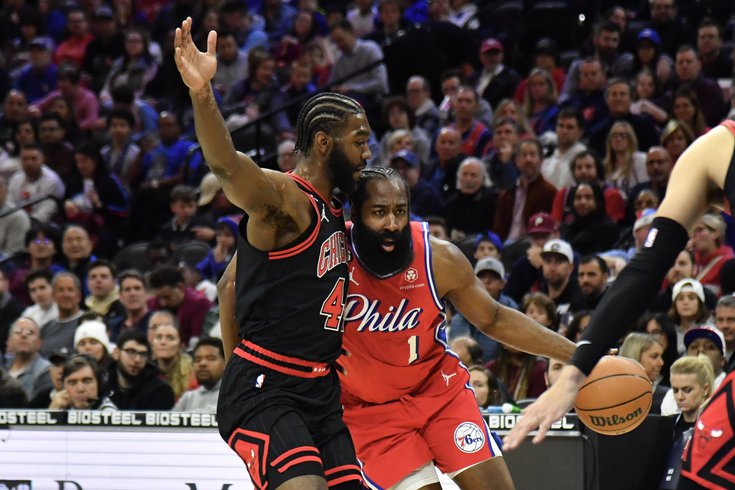 41 points for Zach LaVine were the difference in the Sixers' 126-112 loss to the Bulls, with Philadelphia unable to offer anything close to a counterpunch.

• Welcome back, Tyrese Maxey. Friday night's game was the first time it felt like we got a glimpse of the player who lit up the scoreboard at the start of the year, and it came at a great time, with Joel Embiid in street clothes and James Harden, uh, doing whatever it is James Harden was doing at the start of this game.

Sometimes, it's as simple as needing to see a shot go down early, boosting your confidence and pulling you out of a funk. Maxey knocked down a transition three in the first minute of the game, and it was on from there. He got rolling enough to hoist a heat check jumper in the second quarter, which is a beautiful sight in the midst of the run he's on, even if he ended up missing it.

And it was more than just his shooting touch. Maxey showed off some playmaking chops, leading the second unit capably. Operating out of the pick-and-roll, Maxey got downhill going right and consistently made skip passes to the corner, hitting his shooters on time and on target. Combine that with some deft work around the paint, with Maxey stopping on a dime and hitting midrange jumpers, and it looks like he has finally found his footing (literally and figuratively).

If the only thing they get out of this game is a return to form for Maxey, it was a worthwhile endeavor. They probably needed him to be even more involved in the second half, but that's another story.

• The only other reason the Sixers were in this game down the stretch was Tobias Harris, although I'm somewhat reluctant to go over the top with praise because I thought he had a few too many defensive letdowns in this game.  There were just a few too many moments where he shut his mind off for a second or two, and the Bulls punished him for it, despite Harris playing some good on-ball defense on DeMar DeRozan.

That said, prior to going cold late in the game, I thought this game showed off the versatility Harris adds on offense, with the veteran forward putting together some mid-post makes, catch-and-shoot jumpers, and tough finishes in transition. Not quite enough in the end, but at least a decent outing.

• Great cameo for Paul Reed, who brought activity and length to the floor on a night where the Sixers didn't have enough of either.

• P.J. Tucker as a small-ball five is an idea I like plenty in theory. He's a tough, burly guy who can empower you to play switch-heavy defense and helps you spread the floor on offense. At least, that's what you'd say for the version of Tucker we've seen throughout his career. He has not been that guy in Philadelphia for months, and it is making it tough to build out some lineups you'd really like to see more of.

Offensively, Tucker looks bashful doing just about everything. The Sixers tried to involve him as a screener in pick-and-rolls and handoffs, and though they had moments of success with the latter, it was largely a waste of time. Chicago had no reason to fear Tucker coming off of the screen, and his services would have been better used standing in the corner while waiting to shoot. Except, well, he's not shooting well right now either.

The defensive end is the bigger concern in these small-ball groups specifically, and while I wouldn't blame all of their issues on him, he is certainly not fixing any problems. Tucker is committing fouls that you'd call "lazy" if other guys made them, silly reach-ins and the like. Since he has made a career out of good positioning, smarts, and toughness, you basically have to conclude that age and wear-and-tear are impacting him. Mind and body are not operating at the same speed, and they are suffering because of it.

I tend to believe they are going to need these lineups when they get to high-stakes games in April, May, and potentially June, but they're not going to work if he looks like this.

• I have certainly seen James Harden play better basketball games. This was not a game where he came out ready to throw a haymaker at the opponent, with Harden sort of slogging through the early stages of this one. He had absolutely nothing going for most of the first half, going 1-10 and only coming up with that first make with under a minute to go in the period.

His lack of burst has probably been oversold at times, including by yours truly, but it was evident in this one. When he got matched up with Zach LaVine, I thought he did well to put him on his hip and get to the paint, but Harden got stuck in the mud once he was there, tossing up a bunch of junk at the rim. His outside shooting wasn't any better, with the only solace being that he was willing to take more catch-and-shoot jumpers. The key word there is, "take" because making shots remained a problem.

This is probably a good spot to bring up that Harden has had a heavy, heavy workload for this Sixers team, playing more minutes than he probably ought to at this stage of his career. Bringing him back from a foot injury and immediately playing him a million minutes was not the smartest thing they've ever done. They didn't need to bring him off of the bench or anything drastic, but having him play over 38 minutes per game is going to come with consequences.

Even still, he should probably shoot better than he did on Friday night as a complete accident.

• Perhaps this game will serve as a counterargument to the idea that Matisse Thybulle should play 20+ minutes a night no matter what. He never reached that mark in this game because he made no material impact on it while he was on the floor, and he was a passenger like everybody else when Zach LaVine was cooking in the second half. In fact, LaVine went by him like he was standing still on a few occasions, and save for a nice play in the corner on LaVine's first three-point miss of the night, there wasn't another memorable play made by Thybulle.

He's a situational player who is being played and treated like one, and that's okay.

• I don't want to sit here and pretend that Thybulle was at fault for LaVine going absolutely ballistic from deep, however. In fact, I had a bigger problem with how the Sixers defended LaVine after he got in a groove.

When LaVine hit a heat check three in transition late in the third quarter, forcing Philly to take a timeout, that was the moment when they decided to force the ball out of his hands. Often sending two at LaVine on the ball, Philadelphia executed the doubling/trapping part fine, and then they forgot that they needed to play defense on the rest of the non-LaVine guys once they got it out of his hands.

• I was fully prepared for Montrezl Harrell to follow up a great performance on Wednesday with a stinker in the follow-up against Chicago. Andre Drummond, as most of you know, is a big-bodied center who is liable to pull down 20 rebounds on the right evening, and Harrell is giving up plenty of size against him.

On offense, Harrell did a great job to use his speed in this game, beating Chicago's bigs down the floor and slithering past them in the halfcourt. His pick-and-roll synergy with Harden yielded some easy buckets, but Harrell also managed to turn nothing into something on a few occasions. There was a baseline jumper in the first half, a follow of his own miss moments later, and my personal favorite — Harrell digging out a bad, low pass from Shake Milton, going up strong for two points after the improbable save of the possession.

But I thought Harrell was who we thought he is on the other end. Too many late closeouts on Nic Vucevic, too many plays with wandering eyes off-ball, too many missed rebounding opportunities, and so on. Horrible, horrible, horrible defensive game for him.

• The Bulls' black jerseys are awesome and they should wear them all of the time.

• Tyrese Maxey getting subbed out just a few minutes into the third quarter was an interesting/weird/eyebrow-raising choice by Doc Rivers, seeing as he was one of the few guys playing well all game. Something to check in on postgame, certainly.

• The fan dance battle to Lil Uzi Vert that happens during a timeout in every fourth quarter now is great. Five stars, no notes.