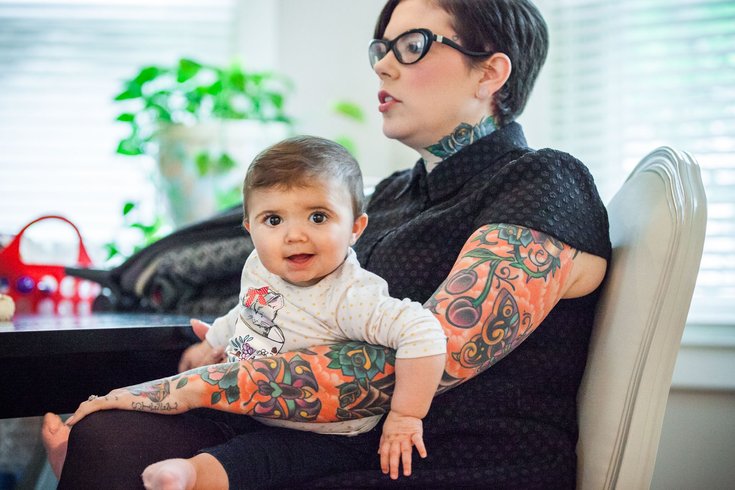 Nicole Angemi, a pathologists' assistant, with her youngest daughter, Lucia.

Not to worry. The pathologists' assistant’s patients are already dead when she first sees them.

Angemi loves her work. She embraces the Latin phrase: Mortui vivos docent, meaning the dead teach the living. As her website, iheartautopsy.com, with its graphic content, explains: “Pathologists’ assistant is not just a job title for me, it’s my life.”

To get a feel for Angemi’s mildly macabre way of life, imagine the Addams Family mansion transformed into a Victorian home in the middle of quaint Merchantville, a tree-lined South Jersey suburb. Despite enough American flags and bunting outside to launch a parade, the vibe inside is decidedly different, equal parts Academy of Natural Sciences diorama, Mütter Museum’s medical history and toddler play zone.

"Nicole has many layers. Yes, she has a bit of a crazy side that makes her special, but she has the side that made her my all-time favorite student. She is intellectual, smart and an awesome teacher.” – Joe DiRienzi, Angemi's mentor at Drexel

In the home’s center hall, there’s taxidermy such as an armadillo — her middle daughter likes playing with him — several specimen head mounts, many sets of antlers, a collection of human molars (wisdom teeth extractions and the rotting teeth of “meth heads,” she explains), her two youngest daughters’ placentas floating in jars of alcohol, dozens and dozens of gallstones and many anatomical curiosities filling the mantel and overflowing curio cabinets.

An oversized jackalope — deer antlers assembled atop a rabbit — bought for her by her husband, Camden City fire captain Gabe Angemi — sits in the dining room.

The abundant taxidermy might explain why the family cat remains out of sight. And her offbeat display is enough to make a delivery guy remain in the vestibule.

But it isn’t just the home that gives pause: there is Angemi herself. Imagine the character played by Pauley Perrette in “NCIS,” but armed with a scalpel and an even sharper South Jersey attitude and you’re partway there toward getting the external Angemi. 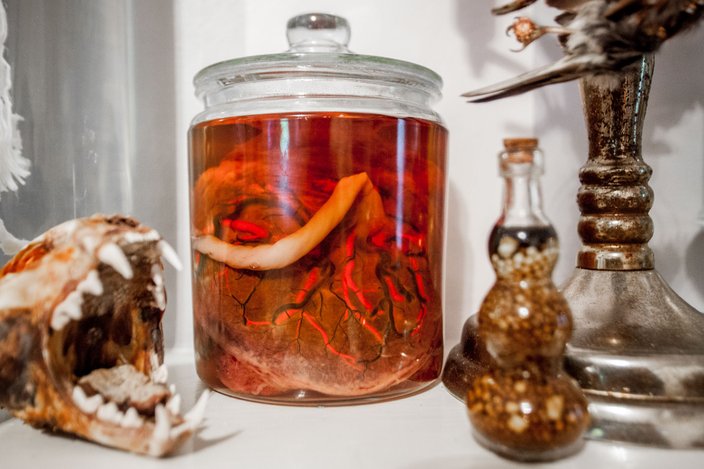 The 35-year-old favors the neo-punk look, but on the girly side, short skirts, dark hair, Morticia Addams’ length on one side, shorn tight on the other, beautifully manicured long long nails, always perfect makeup, more tattoos than you typically see at an ink convention and a South Jersey accent that stubbornly prevents her from pronouncing the letter “g” at the end of nearly every word that should have one.

Angemi covers her outfits and tats at the suburban South Jersey hospital where she works by wearing hoodies, especially at lunch. She also switches out her blinged-out weekend cell phone case to a plain vanilla one at work, easier to sanitize when body fluid smears it.

“I know it isn’t the most professional look,” Angemi says, making it clear she doesn’t care what others think.

'SHE'S OUT OF CONTROL'

Pregnant at 15 and a high school dropout, Angemi, who never took an advanced science class in high school, now holds a master’s degree from Drexel University, where she's a part-time instructor. She adds as many as 7,000 followers a day to her insanely popular (and incredibly graphic) Instagram account, instagram.com/mrs_angemi/. (At 246,000 followers and counting, she's not quite Kim Kardashian, but she’s gaining ground one body at a time.)

Her Instagram account has an eclectic mix of images, family photos, diseased organs, and damaged body parts — or as she sums up, ❤️Wife ❤️Mother🔪Human Dissector.

The account has standing features, including explainers on news events such as the brain cancer that killed Beau Biden, #forensicfriday with seldom-discussed topics and #mysterydiagnosis, where she posts something about a diseased organ, then reveals the answer the following day. 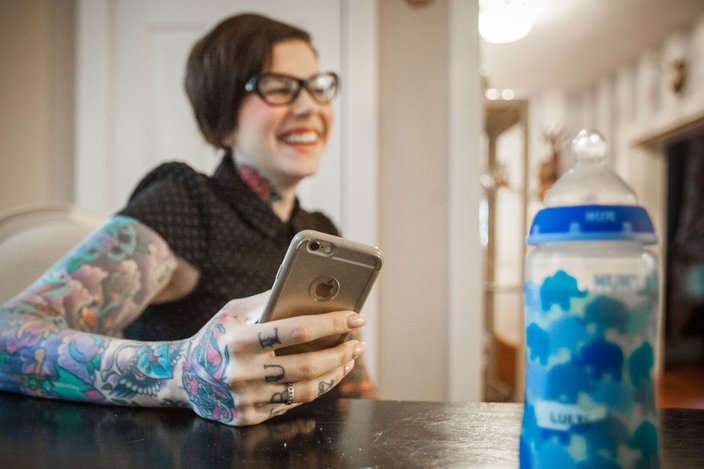 Nicole Angemi scrolls through some of the thousands of images she has received from some of her nearly 250,000 followers on Instagram. (Thom Carroll / PhillyVoice)

Many of the photos she posts are sent by fans, including followers around the world. Dog bites and fetuses — always miscarriages, not aborted — cause the strongest reactions. She admits some obsessive followers send pictures she can never post — she shows me one and I gulp — though she adds, “Nothing skeeves me.”

Her fans can’t get enough: Angemi’s account is hot enough that she has been asked to guest curate the Mütter Museum’s Instagram account for a week to build their following.

She’s also quirky enough to have had five television production companies contact her in recent weeks to discuss reality TV projects. Not bad for someone who early on posted a picture of herself holding a human brain and smiling “like Martha Stewart” and got little response.

He’s proud of his wife’s notoriety. But he stage whispers, “She’s out of control,” as he walks in after picking up the couple’s two small children from daycare.

FRIDGE ON THE FRITZ CHANGED HER LIFE

Her path to Internet stardom has twists.

When Nicole Angemi returned to school at 19, she thought maybe she’d become a nurse. Instead, she went from community college to Jefferson University Hospital, specializing in cytology, looking at cell structures under magnification. College degree in hand, she landed a job, made decent money, bought a house.

Then the breakdown of a pathology fridge changed her life. A resident showed her the cause of the gross smell — an amputated and diseased human leg. “It was crazy but awesome!”

“Yeah, I became a pathology groupie.” 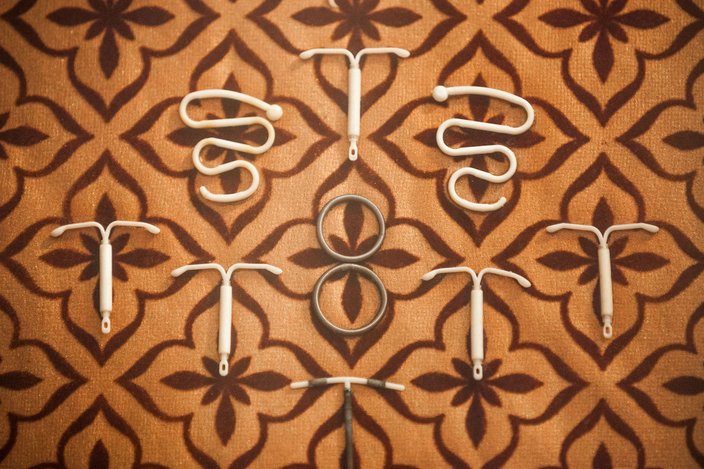 Found IUDs are delicately arranged, framed and hung on the wall of the Angemi home. (Thom Carroll / PhillyVoice)

Her mentor at Drexel, Joe DiRienzi, remembers wondering what he was in for when they met.

“When you first see Nicole, you see a beautiful young lady who has tattoos all over her. My old school self had thoughts of a student who was out there in a world of craziness.

“It was my goal as a mentor to teach her how to do an autopsy as well as teaching her gross pathology, identification of disease in organs," he said. "It was her goal to learn — and to teach me about life.

“Well, I certainly learned. Nicole has many layers. Yes, she has a bit of a crazy side that makes her the special, but she has the side that made her my all-time favorite student. She is intellectual, smart and an awesome teacher.”

Her mother, Beth Qualitieri, says “unique is exactly my word for her. One percent of the students who drop out of school at the age she did, with a child, end up finishing high school. And she has her master's.”

At Drexel, Angemi learned more about what she was already doing. A group of residents adopted her, enjoying the shock value of handing her body parts. When a pathology lab slot opened up, she applied. The fact that she was willing to “open the colon and take the poop out,” made her popular with teaching residents and other pathologists' assistant students at Drexel.

But then there’s nothing gross about gross anatomy for Mrs. Angemi.