The app "hears' the infection, its developers say 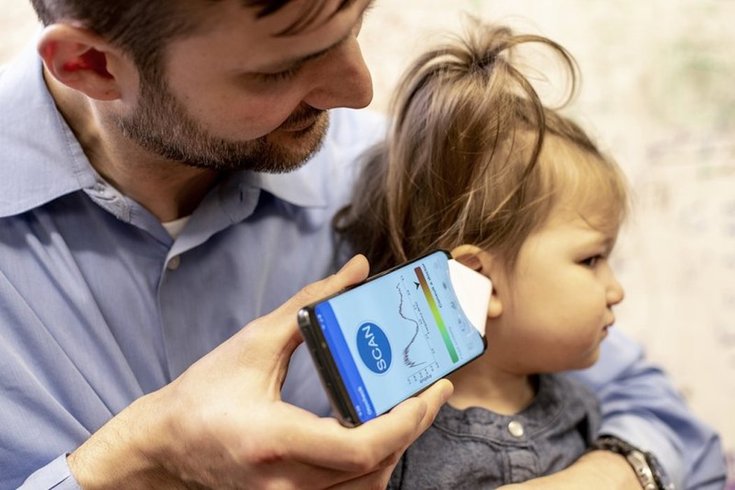 Dennis Wise/University of Washington via AP

In this undated photo provided by the University of Washington, Dr. Randall Bly uses a phone app and a handmade paper funnel to focus the sound, to check his daughter for an ear infection, at the UW School of Medicine in Seattle. Bly and other researchers at the school have developed the system to “hear” a warning sign of ear infections – fluid build-up behind the eardrum.

A group of engineers and doctors at the University of Washington has just developed an app that might save parents a lot of money in co-pays for taking their little ones to the doctor for frequently occurring ear infections.

The best part is, the app doesn’t require some sort of obscure smartphone attachment. Rather, parents just need a few simple household items – scissors, paper and tape – to fashion a rudimentary funnel to help the app “listen” for infection.

Here is how the app works, the Associated Press reported:

Aim the funnel at the ear canal to focus sound. An experimental app beams in birdlike chirps, at a specific frequency. The microphone detects sound waves bouncing off the eardrum.

The app analyzes that echo, a broad-spectrum vibration from a healthy eardrum. Pus or uninfected fluid alters the eardrum’s mobility and changes the reflected sound. The app sends a text saying whether it’s likely that middle-ear fluid is present — one piece of information, along with other symptoms, that might be used for diagnosis.

Researchers published their report on the app — called EarHealth — Wednesday in the journal Science Translational Medicine.

The app was tested two groups of children. Half were kids admitted to Seattle Children’s Hospital for an operation to remove chronic ear fluid buildup and half were getting medical procedures that did not involve their ears, Gizmodo reported. The app was able to detect patients' ear fluid with 85 percent accuracy — which is admittedly pretty good, noting that detecting middle ear fluid is rather difficult, researchers explain.

The researchers also conducted testing on babies between the ages of nine and 18 months, a group at highest risk for ear infections, per Gizmodo. The app correctly identified ear fluid in all five of the 15 kids who were confirmed to have ear fluid.

“What is really unique about this study is that we used the gold standard for diagnosing ear infections,” said co-first author Dr. Sharat Raju, a surgical resident in otolaryngology-head and neck surgery at the UW School of Medicine, in a news release. “When we put in ear tubes, we make an incision into the eardrum and drain any fluid present. That’s the best way to tell if there is fluid behind the eardrum. So these surgeries created the ideal setting for this study.”

The development team hopes the app can be used at home to determine if parents need to take their children to a physician.

According to the AP, this research team received funds from the National Science Foundation and National Institutes of Health. Reportedly, the university filed for a patent and is seeking FDA approval to sell the app.