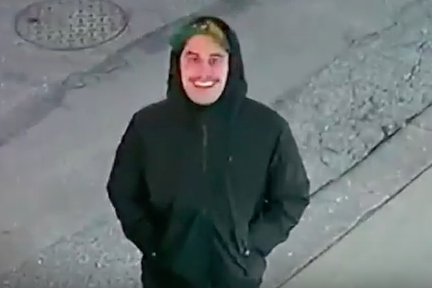 Suspect wanted in vandalism of car in Center City on March 19, 2018.

They're not the sticky bandits and they're not the ruffians from "A Clockwork Orange." They're not even the Nick Foles guy who flipped the car in Center City and got off easy.

They're the milk crate vandals.

Philadelphia police are searching for two men who thought it would be fun to play a game of toss the milk crate in Center City last month. They allegedly hurled the plastic projectile from the street onto an upper floor of a parking garage where the crate struck and damaged a parked car, police said.

At around 1:20 a.m. on March 19, a surveillance camera caught the two suspects at 1415 Sansom St., as they appeared to take turns trying to chuck the milk crate over the garage's wall, which looks to be about 20 feet overhead.

On Monday, investigators shared footage of the incident, which clearly shows the smiling faces of the two men. A suspect dressed in a black hoodie  – who ultimately successfully tossed the milk crate in the parking garage – gazes into the camera and grins before his attempt.

Anyone with information about the incident or the suspects is asked to contact Central Detectives at 215-686-3093.