Snugglers find purpose in their work

How 'touch therapy' works both ways 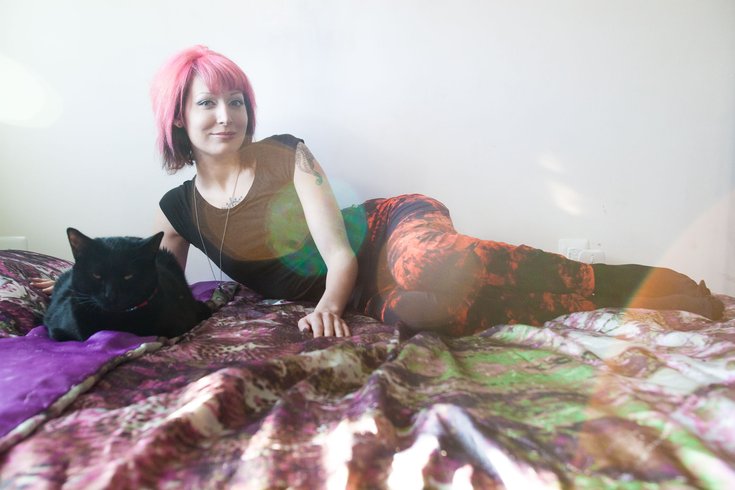 When Becky Rodrigues' friends and family hear about her line of work, the reaction is almost universal.

Others aren't so kind.

You see, Rodrigues cuddles. For money. With strangers.

"I have a family friend who was a little weirded out by it," admits Rodrigues, 34, of Phoenixville, Chester County. "They equated it to prostitution at first."

"Some of them are lonelier people, or they're just people who have a high need of contact for other people. Other than that, it is just people who need affection in their lives." -- professional cuddler Becky Rodrigues, on her clients

But it's not anything remotely close to that, insist professional cuddlers, defending an occupation that has grown, in part, due to recent media coverage of  claims that cuddling, or "touch therapy," can help in the treatment of clients' health and personal issues: lessening depression, improving social skills, and relieving pain.

In fact, Philadelphia-area cuddlers say their work not only benefits their clients, but it helps them, too.

Anomie Fatele used to run five miles a day before she was diagnosed with a handful of chronic conditions that have forced her to use an electronic wheelchair to travel outside of her apartment. Those conditions -- an Arnold-Chiari malformation of the skull and Ehlers-Danlos syndrome, an inherited connective tissue disorder -- have  left her weak and prone to frequent headaches and dizziness, limiting her ability to work.

Pointing to a laptop, the 26-year old notes, "If you asked me to lift that, I couldn't do it."

In January 2014, after her disabilities forced her to leave Temple University, she started looking for a job to help pay her medical bills.

She discovered snuggling - for pay.

A BUSINESS IS BORN

Fatele had long been cuddling with friends who have disabilities. So when she was scanning Craigslist, sifting through jobs she knew she wasn't physically capable of performing, the post calling for professional cuddlers caught her eye.

"I thought I could actually do that as like a therapy and a service for people. Everybody needs a hug sometimes, and I certainly do," said Fatele, who lives in public housing near Temple University. "I feel like in my specific situation, it might actually really mean something to somebody."

So, Fatele joined The Snuggle Buddies, a business founded by Evan Carp of Marlton, Burlington County. Launched in November 2013 with four snugglers (three in New Jersey, one in Pennsylvania) it now employs more than 70, available for sessions across the United States, including California, Michigan and Florida, among other states.

"Things have been amazing," said Carp, whose own disability led him to the snuggling business.

As a student at Arcadia University in Glenside, Montgomery County, Carp says he went from a straight-A student to unable to pay attention in class, a symptom of his battle with reflex sympathetic dystrophy syndrome, a rare disorder of the nervous system characterized by chronic, severe pain.

Depression followed, which led to Carp seeking out a professional cuddling service as a "fix." The problem was he couldn't find any such services in the area. That led to setting up The Snuggle Buddies to help people dealing with problems like his own. 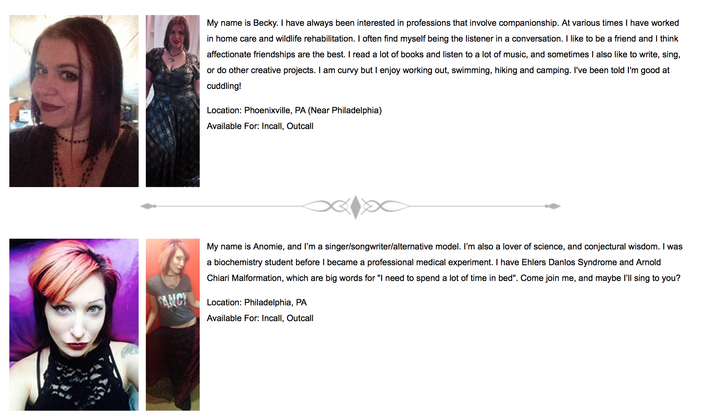 "I literally hadn't talked to human beings outside of doctors for six years," Carp recalled. "The business has helped me develop social skills. Having a business forces responsibility on you and nullifies some of the symptoms [of depression.]"

At its core, a cuddle session is platonic companionship. But an appointment with one of the The Snuggle Buddies could mean a lot of different things depending on what the client seeks. Clients must wear a minimum of a t-shirt and shorts and practice basic hygiene, but mostly everything else is up to them. The cuddling position is up to the client, as long as the snuggler is comfortable with it as well, and as long as it doesn't become sexual in anyway. The practitioners are familiar with more than 50 cuddling positions as detailed in "The Cuddle Sutra" book.

"What is the issue that they're going through, you know, why are they there? Because if you're paying someone to cuddle with you, you're going through something." -- professional cuddler Anomie Fatele

People who need or desire the company of a snuggler are willing to pay handsomely for the service.

Prices range from $80 for an hour to $400 for an overnight session. That fee is comparable to the cost of  a therapeutic massage or acupuncture session, other treatments not often covered by health insurance unless deemed medically necessary and paid for out of pocket. The snugglers split their hourly rate with Carp, earning $40 an hour. Rodrigues has no problem with that, saying Carp provides a website to market her services and other business components she lacks.

"I'm not too great at self-marketing. I like that the advertising is done," Rodrigues said. "It's still a lot more than I would normally make per hour, so I'm happy with it."

Rodrigues, who is currently single, went through a divorce that finalized in August 2014.

"After that, I was just wanted to cuddle," Rodrigues said.

So when her friend posted the ad to work for The Snuggle Buddies on Facebook, she figured she might as well get paid for it.

A screening process requires prospective clients to sign a contract agreeing to the platonic nature of the snuggling session and the privacy of the client, among other things. Snugglers are either available for incalls, in their own home, or outcalls, at a client's home or another location. 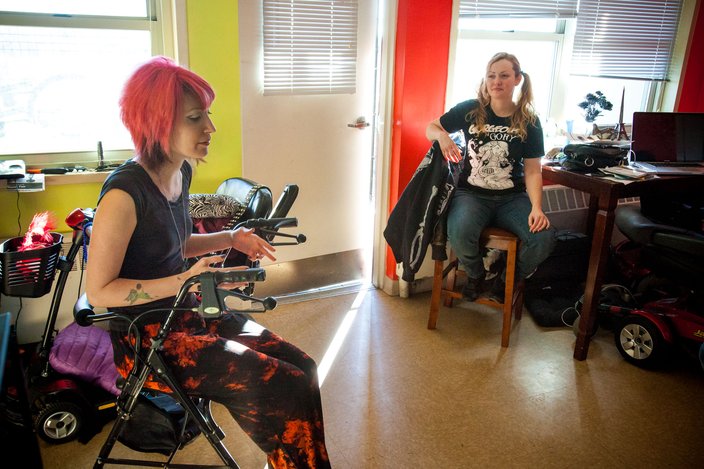 Fatele, who mainly does incalls because of her limitations, receives disability benefits at a level that allows her to work part-time to help pay her expenses. She screens potential clients on her own after her early experiences in the business. She asks clients whether they're allergic to cats because her pet "Schrodinger" almost caused her very first client to have a bad reaction. She asks if they are able to travel to her apartment in North Philadelphia, where she moved after a year of couch-surfing at friends' places. 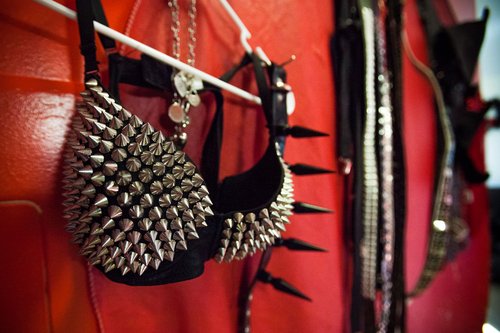 Fatele takes her cuddling very seriously. She notes that while most people who use the service are looking for a platonic form of therapy, she has had to turn down others looking for the wrong thing.

"I've had people asking for like, a tantric massage, or like, 'I want you to be wearing skimpy lingerie.' I'm like 'nope,'" Fatele said. "This is the wrong service for you. There are plenty of girls on back pages that will do that for you, but this is a therapy."

Rodrigues, who does some outcalls but mostly takes incalls at her home, has also rejected customers with expectations of sex.

"The worst are people who wanted sexual favors," Rodrigues said."They left early because they didn't get that. That's always disappointing, and it's a bit insulting, too."

For Fatele, who is single, cuddling isn't only about touch. Establishing a relationship with her clients is important as well, as she believes a certain level of trust and understanding is what makes her work effective.

"You've gotta talk to the person and get a feel for what their boundaries are, what they're comfortable with and what's going on with them," Fatele said. "What is the issue that they're going through, you know, why are they there? Because if you're paying someone to cuddle with you, you're going through something."

Rodrigues echoed that sentiment, noting that although her clients may come for cuddling, they often are looking for an understanding ear to accompany her touch.

"In some ways it's hard to find someone who is just going to listen to you," she said. "Even when you're out with your friends, sometimes people just fight over who gets to talk next, so it is hard to just find someone to listen."

With a number of repeat customers, it appears some truly have found tangible benefits from paying to cuddle. Although Carp notes that The Snuggle Buddies are not licensed therapists, the service is meant to address four major issues in people's lives: loneliness, depression, anxiety and stress. Rodrigues, who also works as a caregiver for senior citizens, says that clients have booked sessions for a variety of reasons.

"There have been people that have been single for a while, or recently got out of a relationship," Rodrigues said. "Some of them are lonelier people, or they're just people who have a high need of contact for other people. Other than that, it is just people who need affection in their lives."

While the money is nice, Rodrigues looks for something more in her sessions.

"I hope to have a nice connection with a human being," Rodrigues said.

Fatele said she has gained a lot from the experience, not only financially but emotionally as well. While her disability has gotten in the way of some of her dreams, such as starting a non-profit organization or pursuing music, she has found something to be proud of in her snuggling.

"I actually get to be employed doing what I have to do," Fatele said, referring to the time she has to spend resting in bed. "It feels like there's actually a purpose for me. I actually feel positive, I'm helping people, I'm doing something, I'm employed."