Someone dressed as Mr. Monopoly stole the show at the Google data collection hearing 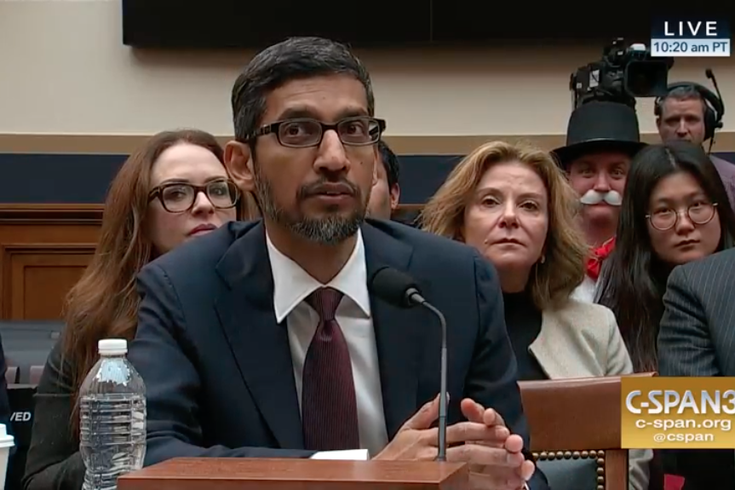 At the data collection hearing in front of the House Judiciary Committee, a protestor dressed up as Rich Uncle Pennybags.

If you caught the congressional hearing at all, you definitely saw this. I mean, it was hard to miss.

The live stream put Rich Uncle Pennybags, the mascot for the Monopoly game, in perfect view. Mr. Monopoly wore a top hat, had a white mustache, wore a monocle, a red bowtie, carried a bag of money, the works.

Monopoly was making faces at the camera the entire time, making it hard to focus on the actual hearing.

On social media, people started to post about the cameo because how could you not see it?

Mr Monopoly is killing it at the Google hearing.... pic.twitter.com/Z1ZZNYANxL

I'm streaming the C-SPAN coverage of Google's data collection hearing and there's someone dressed up as Mr. Monopoly in the background. pic.twitter.com/RmqJGP5RPL

As of 1:19 p.m., Rich Uncle Pennybags was still there and still in character.

Apparently this little act of protest has happened at hearings before.

Courtesy of Reddit, a Mr. Monopoly showed up last year at the Oct. 2017 Equifax congressional hearing in front of the Banking, Housing, and Urban Affairs Committee, too. CNN also has an old link of it.

It doesn't appear to be the same person putting on the character, but we could be wrong.

The Monopoly Guy at the Equifax hearing, reminds me of the Bitcoin Guy at the Yellen hearing from r/Bitcoin