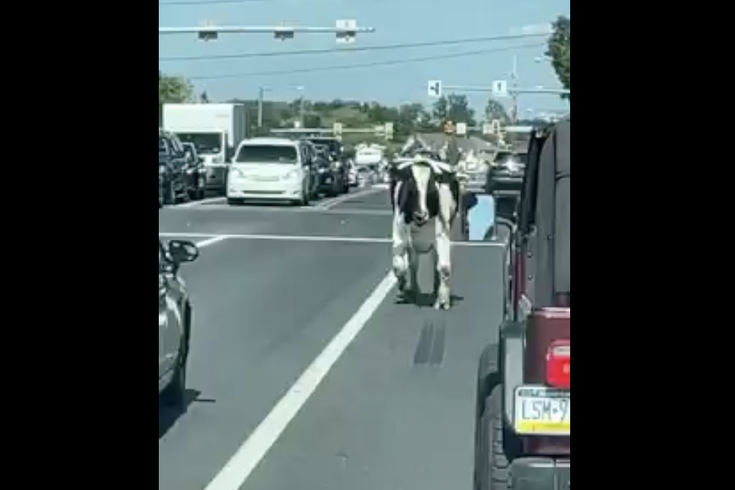 A bull escaped from a truck in the area of Souderton and Hilltown Township in Bucks County on Sept. 7, 2021. The animal was eventually captured outside the Souderton Square Shopping Center.

Bulls and cows have an uncanny sense of danger when they're being taken to a slaughterhouse. It's not uncommon to come across stories of bold escapes, whether it's because of poor handling by people or because the animal sensed an opportunity to make a beeline for freedom.

In Bucks County on Tuesday afternoon, a black and white Holstein bull broke free from a transport vehicle in Hilltown Township and wound up in the middle of traffic on Route 113, near the intersection of Route 309.

Hilltown Police Chief Chris Engelhart told the Bucks County Courier Times the bull got free thanks to a malfunctioning door to the vehicle it was riding in.

A man who was in his car on Route 113 captured a video of the bull trotting along the highway, accompanied almost too perfectly by a hardcore band playing on the cameraman's car stereo.

If anyone is missing their cow, I found it taking a stroll on 113 in souderton

The bull was eventually cornered and corralled outside a China Panda restaurant in the Souderton Square Shopping Center, according to North Penn Now. It was later returned to its owner.

It's unknown whether the bull eventually met its fate at the slaughterhouse. Unfortunately, these situations typically don't end well for the bull, one way or another.

In November 2016, a bull broke free from a truck in Philadelphia and ventured onto the shoulder of I-95 in the vicinity of the Rivers Casino, still called SugarHouse at the time. The bull eventually wound up in Old City, three miles away, where a Pennsylvania Game Commission officer euthanized the animal with a 12-gauge shotgun and described the incident as "an extreme situation."

Occasionally, an escaped cow or bull will be given a reprieve. When 40 cows escaped a slaughterhouse in the Los Angeles area this summer, the last of the animals to be recovered was spared and sent to a sanctuary. And in an even more stunning incident, a cow that escaped a slaughterhouse in Poland managed to swim to a small island, where it was anointed a hero and permitted to live out its days with provisions of food.

It's hard to ignore the awareness these animals seem to display and not take a moment to consider what we put them through in order to support a carnivorous lifestyle, in addition to other concerns about the impact of intensive livestock agriculture. Though the animals who escape may not always be given a second lease on life, those who are shown such mercy are entirely deserving of it for their feats of survival.