Written off as a conspiracy theory, the sign in Woodstown, Salem County marks the first of its kind in America 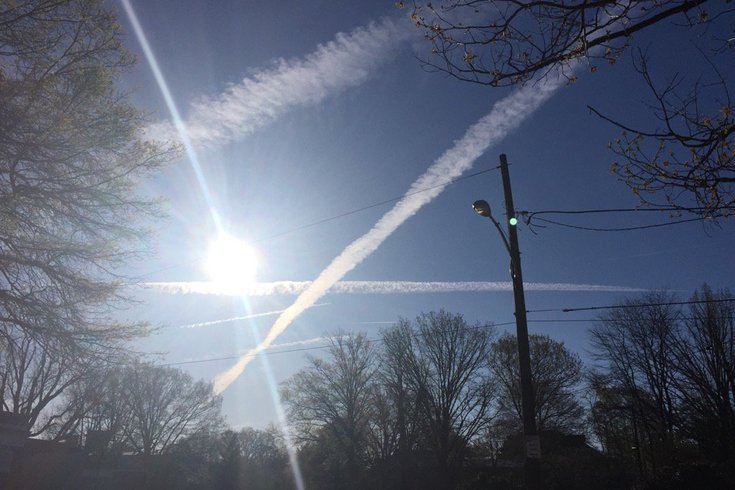 The skies over Northwest Philadelphia were strewn with 'chemtrails' one April afternoon.

There is an interesting story in Thursday’s Inquirer about a South Jersey billboard warning passersby about the dangers of chemtrails which, some of you already know, just happen to be a social-media fixation* of mine. I thank the wide swath of woke friends who brought it to my attention.

“LOOK UP Your Weather is Engineered” reads the ClearChannel billboard located in Woodstown, Salem County, directing people to check out the website byebyeBLUEsky.com. 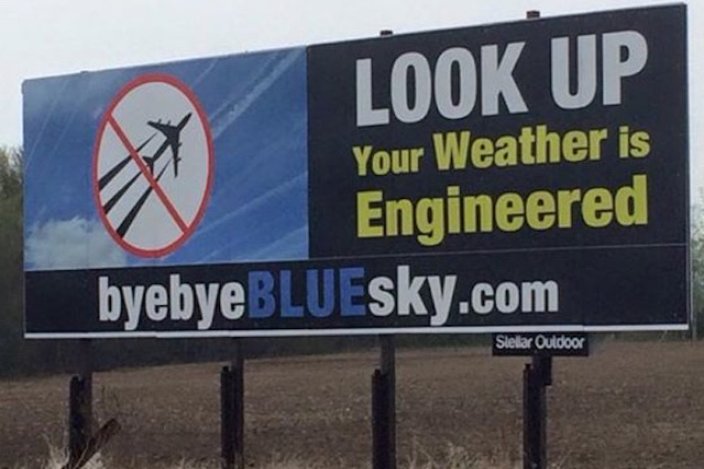 Per its mission statement, BBBS “is a dedicated global public environmental movement who seeks to be a voice for all living creatures and ecosystems, to protect human health and safeguard the natural environment, air, water, land and which our sustenance depends.

“We use education, peaceful protest and creative communication to expose one of the world’s largest and most significant ecological threats and pre imminent disasters, commonly known as Chemtrails or Climate Engineering.”

Per a quote from BBBS activist Suzanne Maher, as quoted in the story, “This is extremely dangerous. This is genocide.”

Suffice it to say, my predisposition to take photographs of chemtrail-riddled skies on occasion …

Ok, chemtrails pilots, now you're just getting too brazen for comfort. pic.twitter.com/63nWa8DD1S

Hey @CarMax I guess you're ok with airing #chemtrails in your ads? pic.twitter.com/3g2uD19waZ

They want you to watch the Mummers so you don't see the chemtrails overhead. pic.twitter.com/s8HZfA9oMq

It’s also prompted debates with unwoke “experts” who call them contrails, water vapors or other sanitized terms meant to protect the Illuminati cabal’s mission for complete control over commoners blinded to the truth (see here and here.)

Now is the perfect time for this issue to come to the foreground, though, if only to honor the memory of the late Prince Rogers Nelson, who broached the topic with Tavis Smiley some time ago.

Utterly (and – dare I say – dangerously) dismissive of Prince’s claims, the Inquirer story quotes “experts” with ties to the Environmental Defense Fund, Penn State University’s Center for Solutions to Weather and Climate Risk and centers of “higher education” including the University of Michigan and the University of Oxford.

The common thread is painting chemtrail believers as a populace in need of headgear fashioned from aluminum foil. (As if that could stop the effects of chemtrails.)

This is an irresponsible approach, this dismissiveness, but I don’t think the Inquirer set out to aid and abet enemies of free thought and long lifespans, though.

They, too, live under the same skies, and I’m sure Chemtrail Commission records of Infected Brains is proprietary data and, thus, unavailable for public perusal.

So I say this: The more BBBS billboards in the region, the better.

We should celebrate retired health care worker Sharon LePere’s successful GoFundMe campaign which raised $1,350 to bring the first such billboard to America.

The haters will hate, and the deniers will deny, but nobody will ever be able to take the accomplishment of chemtrail education and awareness away from LePere. We are all better off because of it, but whether we become safer is dependent on where this mission goes from here.

*C’mon, people, I really don’t believe the gubmint uses chemtrails to control our minds and weather (please don't tell anybody!!!), but trolling people who think I do is so fun that I will continue to do so. This, because I’m apparently still a cynical, conspiratorial-minded teenager at heart. Just don’t expect me to ever accept that the moon landing was actually filmed on the moon, K?