Is this prominent South Philly fixture the worst hotel in the city?

Reviews of the tall, round Penrose Hotel draw comparisons to post-apocalyptic movies and Hell itself 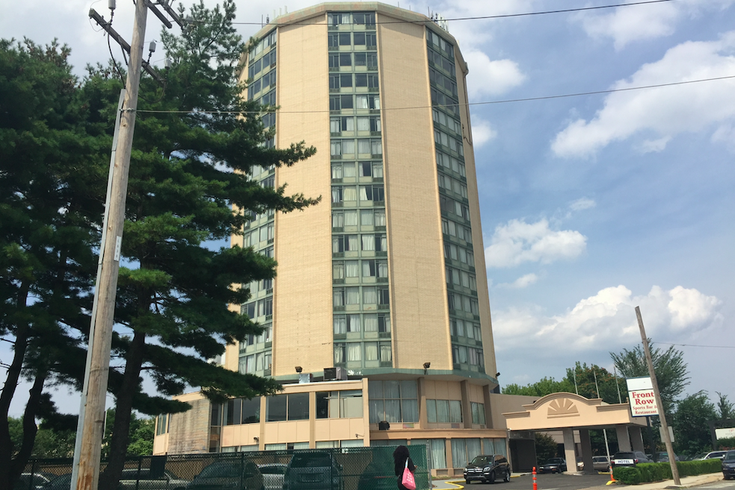 The Penrose Hotel, located at 2033 Penrose Avenue, has been subjected to countless horrible reviews from customers who cite uncleanly conditions, an inoperable elevator and, among other things, suffering bug bites while staying there.

He arrived in Philadelphia a day earlier than expected for last month’s Netroots Nation convention.

There were no rooms available that night at the hotel he'd booked for the next few days, so the New York-based activist searched online for vacancies in the city.

“I was thinking I was doing the smart thing, not jumping at the cheapest room, but maybe the second or third cheapest,” he explained. “It’s was a ‘one bottle of wine up from the bottom shelf’ approach.”

By not looking at the online reviews, he most certainly was not doing the smart thing. The ensuing mayhem would start with a wee-hours check-in experience.

“When I got there around 1, 1:30 in the morning, there was someone in front of me at the desk having a long drawn-out fight with the person behind the desk,” said the man who didn’t wish to be identified by name in this story. “I couldn’t totally figure out what it was, but it sounded like they wanted to get a refund and leave.”

A few minutes later, the activist was told the hotel elevator was broken, a daunting prospect in a 16-story building.

“When I asked if it was going to be fixed soon, the woman at the desk said, ‘I don’t think so. It’s been that way for about a year now. But don’t worry, we don’t put people higher than the sixth or seventh floor,’” he recalled. “They gave me something on the second floor.”

To the stairwell, he trudged with his bags. He followed spray-painted signs stenciled on the walls to help  guests make their way upstairs.

When he got to what he thought was the second floor, he tried to open the door. It would only open a few inches.

“There was string or rope on the other side of the door, tied to an indeterminate location,” he said. “’I just can’t imagine that anything good is going on on that floor. It was pretty alarming.”

He went back down to the lobby to alert the staff and was given a room on a different floor.

By 2:30 a.m., he finally got to lay down in bed. Around 7 a.m., he “hightailed it out of there” and headed to Center City, where he started telling friends about “this crazy hotel I stayed at last night.”

One of them looked up the Penrose Hotel on Yelp. 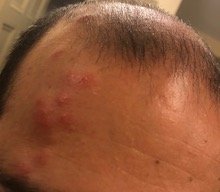 The New York man who stayed at the Penrose Hotel the night before the Netroots Nation convention suffered numerous bug bites during his stay.

“She started talking about the posts about bug bites. 'Bug bites? You don’t say.' My forehead was really itchy,” he recalled. “That’s when I noticed 10 giant bites across the right side of my face and five more on my left wrist. I couldn’t tell for sure if it was spiders, fleas or bedbugs.

From that point on, everybody started noticing the bites on his forehead.

“For the next three days, I had to tell people that I had bug bites so they didn’t think I had some horrible rash or illness,” he said. “They were pretty prominent. Big and red, about three times the size of a mosquito bite. By the time I got back to work that Monday, you could still see where there had been bites."

A THREAT TO PUBLIC HEALTH AND SAFETY

Yelp reviews aren’t always the most accurate assessments of a given business, as they’re subject to the whims of anonymous posters who may have a grudge.

Still, the sheer volume of negative comments about the Penrose – on Yelp, TripAdvisor and complaints lodged with the Better Business Bureau – would likely drive any potential customer to seek better places to lay their head.

As if those weren’t enough – and we’ll get to a sampling of the reviews shortly – a lawsuit was filed against the hotel in 2012 by a guest who claimed he fell through the window of his fourth-floor room.

The owners face a $125,000 fine levied on June 18, with an additional $1,000 per day the property “remains out of compliance with the Philadelphia Code.”

“The conditions … and the failure of the defendants to maintain appropriate licenses and/or permits constitutes a threat to the health, welfare, and safety of the public,” according to a court order obtained from the city's Department of Licenses and Inspections.

The court compelled the hotel to “make all repairs to the elevators, install self-closing doors with panic bars on each level of the stairwells, obtain certification for the fire alarm and suppression system (and) institute a 24-hour fire watch immediately and security checks to ensure upper floors are not occupied.”

Without a "cease operations" order in place, though, the parking lots surrounding the Penrose were filled with guests’ vehicles, and it’s still possible to rent a room online or via telephone.

A spokesman for the city's Health Department said, after this story was published, that their agency has fielded no complaints about rats or mosquito infestations, or health-related problems tied to the food served there.

An attempt to get comment from the Penrose Hotel about the ongoing legal case, and the years of horrible social media reviews from customers, was unsuccessful this week.

The person who answered the phone there said the general manager, Ava, was unavailable until next Tuesday and that she’s the only person permitted to speak to the media.

An email sent to an account believed to be a hotel owner, who is due back in court on September 24, went unreturned as well.

Meanwhile, a Philadelphia hotel-industry source who requested anonymity expressed a desire to see the Penrose, which draws customers from the nearby airport and from patrons of concerts or sporting events in the stadium district, shut down.

“That hotel gives our entire industry, and city, a bad name,” he said.

'GET YOUR PENICILLIN SHOT'

For the dangerous conditions cited in court, the online avalanche of negative reviews has a bit of a dark-humorous edge to them.

The highlights – well, lowlights – include:

• “When I asked to move rooms or complained about the conditions, they yelled at me and insisted that everything is fine. I asked for a refund and they did not agree, [saying that] because ‘other hotels in Philly are more expensive. You should know what you were getting into.’” (Yelp, May 19, 2019)

• “We had to lug our luggage up a disgusting, spooky stairwell that TWO DIFFERENT TIMES DURING MY STAY I heard other guests on the stairwell say ‘it looks like a murder scene’” .... “The second thing I noticed was the smell. Somebody obviously pissed on the floor of our room.” (Yelp, July 31, 2019)

• "My nephew booked this tangible piece of HELL!!. This place is a nightmare disguised as a dream in the name of Penrose Hotel." (TripAdvisor, June 29, 2019)

• “We actually had to stand back from of the overwhelming stench that greeted us. After we mustered enough courage to enter, we sloshed through the carpet (or whatever that was on the floor) to realize the room hasn't been made (probably for some very long time). The water was running (not dripping) in what was once likely a bathtub. Half used bottles were strewn about, the bed covers were on the wet floor and thrown over a moldy chair.” (Yelp, July 31, 2019)

• "Think Tower of Terror meets Eli Roth’s 'Hostel.' This place is scary! We needed a place near downtown Philly due to an early morning neurosurgery and because of a big convention, this was the last place in town less than $400/night. Having ‘survived’ the experience (we made it out alive) I asked my wife… ‘Would You Rather' have a craniotomy and be able to be discharged home on Sat. or have to stay at the Penrose until Sat?’” (Trip Advisor, June 6, 2019)

• “You have to go up a stairway that has gang tags all over the place. There is red stains on the bed – what’s even more disturbing is that the same stains are on the wall as well” .... “There's a phrase ‘avoid it like the plague.’ Well after being here, I welcome the plague.” (Yelp, March 29, 2019)

• “This place looks like something out of a post-apocalyptic movie. I wouldn't wish a stay at this place on my worst enemy. … This place might actually be what hell is.” (Yelp, August 11, 2018)

• “We weren't there for more than 15 minutes before we came to realize we value our lives and wellbeings too much to stay there.” (Yelp, April 8, 2019)

• “Worst hotel EVER! .... Philadelphia Health department should shut it DOWN or get your penicillin shot before you go!!!” (Yelp, November 17, 2018)

• "When I got to our room about midnight the maid was telling my daughter that her and her fiancé had decided the sheets were clean but would change it if I really wanted. I said I’d do it myself but wished I hadn’t so she could see the dirty sock I found in the bed!!" (TripAdvisor, August 4, 2019)

• “As I'm trying to brush my teeth, my husband informs me ‘something fell into the trash can, I probably wouldn't look if I were you.’ Well, I looked and it was a DAMN MOUSE! Y'all, I about died! I felt my soul leave my body!! As I'm frantically headed for the door I feel something on my arm, IT WAS A ROACH! A damn ROACH!” (Yelp, June 3, 2018)

• “We go to escape the dungeon of horror to go to a nice dinner, I then tumbled down the narrow staircase because they were slippery.” (Yelp, October 21, 2018)

Though no one connected with the hotel returned multiple requests for comment, the advertorial on the hotel's online booking page paints a much different picture than the one described by guests.

"Everyone needs a place to lay their weary head. For travelers visiting Philadelphia, Penrose Hotel is an excellent choice for rest and rejuvenation," it states before touting its "budget friendly environment and proximity to great restaurants and attractions" and boasting of free WiFi, air conditioning and flat-screen TVs. "Whether you’re traveling for business, pleasure or both, Penrose Hotel is sure to make your visit to Philadelphia one worth remembering."

Most people sure do remember their time at the Penrose, just not for the reasons the hotel would hope.

“They say comedy is pain plus time," said the guest who left the Penrose with bug bites covering his forehead and has yet to remove his suitcase from inside the five trash bags he placed it upon getting home. "This was a rather unpleasant experience, but I'm trying to laugh about it now.”