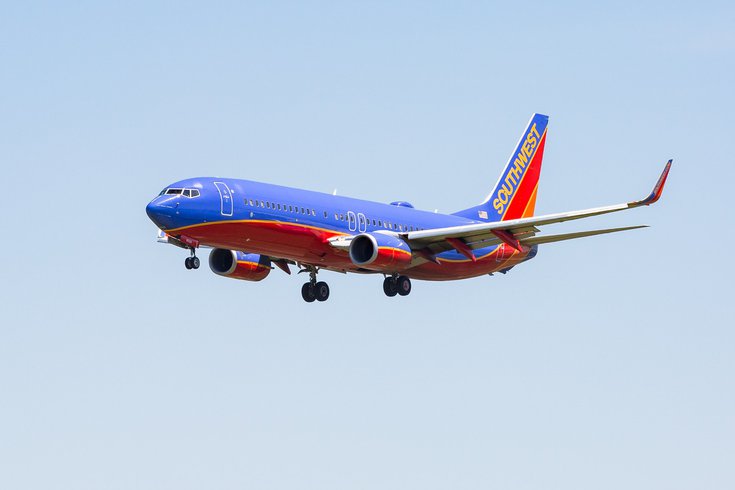 Southwest Airlines canceled 360 nationwide flights Monday, which accounts for 10% of the airline's scheduled trips, following a weekend when the carrier canceled almost 2,000 trips. The disruptions are impacting travelers at Philadelphia International Airport.

Travelers scheduled to fly out of Philadelphia International Airport via Southwest Airlines on Monday will want to double check that their flight hasn't been canceled before heading out the door.

Widespread cancellations of Southwest flights that had started over the weekend continue nationwide. Southwest Airlines canceled 364 flights as of midday Monday, which accounts for 10% of the airline's scheduled trips, according to FlightAware. Among U.S. carriers, American Airlines had the second most cancellations Monday with 49 – or 1% of its total flights.

On Sunday, eight Southwest flights originating or departing from Philadelphia were canceled – that's 27% of the flights scheduled to takeoff or land in Philly – and by midday Monday, another four had been called off.

Two of Monday's canceled flights were departing from Philly – one to Chicago and the other to Nashville,. The other two originated in Nashville and Orlando, with Philly as their final destination. No other airlines flying into and out of Philadelphia have reported cancellations yet Monday.

Southwest Airlines did not immediately respond to a call for comment on the situation.

Southwest called off almost 2,000 flights nationwide this weekend, including 30% of its trips scheduled for Sunday. The Dallas-based airline blamed air traffic control issues and bad weather.

However, the Federal Aviation Administration said Sunday that no air traffic control staffing shortages had been reported since Friday. Any issues that the airline was experiencing was due to "aircraft and crews being out of place," the FAA said.

Southwest was the only airline to experience such significant schedule disruptions last weekend. American Airlines canceled 5% of its trips Sunday, while Spirit Airlines called off 4% of its flights. United, Delta and Frontier Airlines all reported no cancellations Sunday.

Alan Kasher, Southwest's executive vice president of daily operations, issued an apology Sunday to staff, writing that the airline "could not anticipate the significant disruption that was created from unexpected ATC issues and bad weather."

"I'm sorry for the struggles that you and our customers are experiencing, once again," Kasher wrote.

Reports emerged have emerged the cancellations could have been the result of employees not reporting to work in protest of the airline's COVID-19 vaccine mandate. The airline and the Southwest Airlines Pilots Association denied the claim, and the pilots union blamed the problems on poor management.

"Our pilots will continue to overcome SWA management’s poor planning, as well as any external operational challenges, and remain the most productive pilots in the world," the union said. "They will continue to be focused on their highest priority – safety. SWAPA pilots are true professionals and will always maintain the highest level of responsibility to their crews, their passengers and our airline."