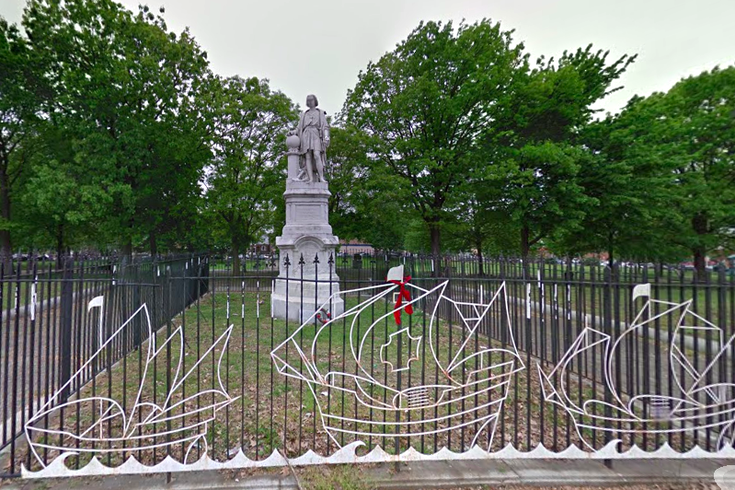 Pennsylvania's Commonwealth Court ordered the plywood box surrounding the Christopher Columbus statue at Marconi Plaza in South Philly to remain in place Saturday after the Court of Common Pleas ruled Friday that the monument must be uncovered.

It appears that the controversial Christopher Columbus statue at Marconi Plaza in South Philadelphia will stay boxed up for now.

Pennsylvania's Commonwealth Court ordered the plywood structure surrounding the monument to remain in place Saturday after the Court of Common Pleas ruled Friday that the statue must be uncovered.

The city appealed the previous order, arguing that removing the box would be "a serious public safety risk" ahead of Columbus Day and Indigenous Peoples Day on Monday. No action was to be taken until the Commonwealth Court issued its decision Saturday.

Grateful that the Commonwealth Court took the time to review this important matter tonight. The Commonwealth Court reinstated the stay and overturned the Court of Common Pleas order from earlier today. No action will be taken with respect to the statue at this time. https://t.co/mZuujxy4u9

Judge Paula Patrick said in her ruling Friday that the city could instead install a clear structure so that visitors would still be able to see the statue. Her decision followed a previous ruling in August in which she said the statue could not be removed.

A pair of city commissions both voted last year to remove the monument and place it in storage after the statue was a site of flaring tensions during the civil unrest that followed the murder of George Floyd by a police officer in Minneapolis. The vote was upheld by the city's Board of License and Inspection Review.

A lawsuit opposing the statue's removal was brought by the volunteer group Friends of Marconi Plaza. Judge Patrick said in her ruling this August that the city's decision to remove the statue was not supported by law and lacked sufficient evidence.

The controversial statue was boxed up last year after an armed group of people protecting the monument clashed with a group protesting for its removal. Those in favor of preserving the statue say it is a cultural symbol of their Italian heritage, while those in opposition see the monument as a representation of oppression.

Other Columbus statues around the country were also vandalized during protests following Floyd's murder last year. Some cities, including Camden, had the monuments removed.