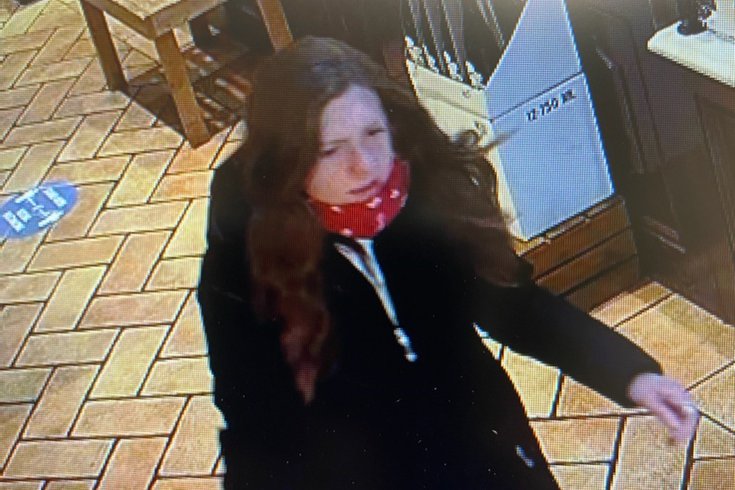 Police say this woman allegedly spit in the faces of two people while shopping at Di Bruno Bros. in Center City. The incidents happened on April 18 and April 19, 2020, investigators say.

UPDATE (4/24/2020): The woman who allegedly spit in the faces of two people at the Di Bruno Bros. store in Rittenhouse last weekend was arrested Thursday night, Philadelphia police said.

She has been identified as Jacqueline McBride, 27. McBride is charged with simple assault, terroristic threats and harassment, police said.

The original report is below.

Philadelphia police are looking for the woman who allegedly spit in the faces of an employee and another shopper at Di Bruno Bros. grocery store near Rittenhouse Square last weekend.

The incidents happened on separate days inside the shop at 1730 Chestnut St. Police said the first occurred Saturday after the woman got into argument with a Di Bruno's employee about how she wanted to pay for her groceries, and she allegedly spit in the employee's face.

MORE: Pennsylvania to reopen in three phases on a region-by-region basis

The woman returned to the store Sunday. While shopping she bumped into another woman at the grocery store. The other shopper complained the suspect was not following social distancing guidelines, police said. The suspect then lowered her mask to say, "B****, I don't have the virus," before allegedly spitting into the customer's face.

The suspect left Di Bruno's, and the other shopper, who was wearing a mask and glasses, was not injured, according to police.

On Thursday, Mayor Jim Kenney called the woman's actions "unconscionable and criminal," adding "We need to get this woman some place where she can't spit on anyone anymore."

The suspect is between 30 and 35-years-old, about 5 feet 6 inches tall with a thin build and reddish brown hair, police said. She was wearing a quarter-length, black jacket, dark pants, and a red bandana around her neck in a surveillance image.

Anyone who recognizes the suspect can call the Central Detectives Division at (215) 686-3093, or contact the the Philadelphia police tipline at (215) 686-TIPS.