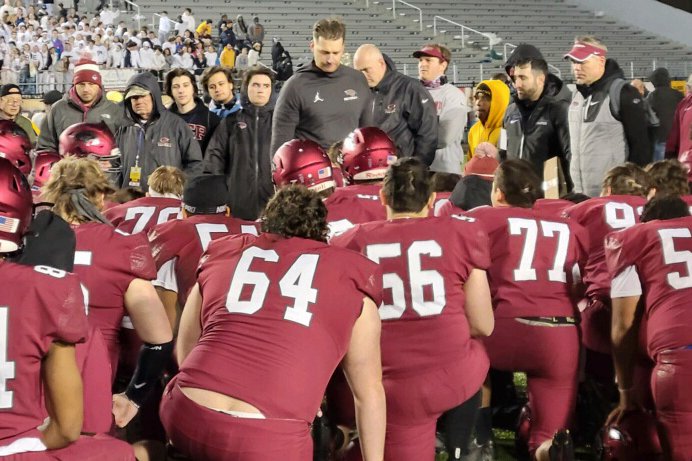 It was bound to end one of these years. And if there was a time to get St. Joseph’s Prep, this was the year.

The Hawks’ attempt to become the first “large school” team in PIAA history to fourpeat was halted by Mt. Lebanon, 35-17, in the PIAA Class 6A state championship on Saturday night at Hersheypark Stadium.

St. Joe’s had an 18-game winning streak dating back to 2019 snapped this season, saw their six-year winning streak against Catholic League archrival La Salle come to an end, and when doubt surrounded whether or not Prep would make its sixth-straight trip to the state championship, the Hawks still managed.

This was considered a bridge season for St. Joe’s (11-3), with a young team in transition. The Hawks ran into a senior-laden District 7 champion Mt. Lebanon that never won a PIAA state title before.

The Blue Devils finished 15-0 and had a trio of determined weapons to stop in pint-sized quarterback Joey Daniels, tailback Alex Tezca and wide receiver Eli Heidenreich.

Tezca scored three times — twice rushing, once through the air. Hawks’ sophomore quarterback Samaj Jones threw for one touchdown and ran for another, but The Prep turned the ball over three times, one resulting in a first-quarter 13-yard Heidenreich touchdown run.

“They did everything we practiced against, we just didn’t execute the way we can,” said Hawks’ sophomore cornerback Omillio Agard, who had a clutch interception that helped the Hawks stay in the game. “I’m hurt, this hurts bad, especially for the seniors. I love these guys. I’m hurt because Keenan (Nelson, Hawks’ South Carolina-bound senior defensive back) should have won a state championship his senior year.

“I’m saying this, let it burn now, because we’re going to be back next year.”

Entering the season, the Hawks were 21-1 in the state playoffs. Now, they fall to 21-2, with a good portion of their team returning.

Mt. Lebanon scored on three of its first four possessions, surging to a 21-7 lead, and two of the first three plays they ran.

“It was that first quarter, they came out with the momentum and hit us in our weak spots,” Hawks’ senior defensive lineman Dan Daly said. “A lot of people doubted us this year, because of all of the great Prep teams that came before us. We came out, and worked hard, if not harder. It didn’t work out the way we wanted it to, but we did get here.”

On Friday, Imhotep Charter lost a late lead, then imploded in overtime in losing to Penn-Trafford, 17-14, in the PIAA Class 5A state title game.

Imhotep (11-2) was led by sophomore tailback Tre McLeod, who pounded Penn-Trafford for a game-high 185 yards rushing on 28 carries, and Rahmir Stewart, who scored both Panther touchdowns, his second came with 7:29 left and seemingly gave Imhotep the game.

No one thought Penn-Trafford (13-2) would get to the state championship — let alone win it. The District 7 3A champion sat at 2-2 in mid-September and somehow found a way to rebound from the 14-7 deficit on Friday night against one of the best defenses in the state.

The Warriors responded to Stewart’s second score with a 12-play, 56-yard drive, ending with Jack Jollie’s two-yard pass reception of Conlan Greene’s jump pass and Nate Schlessinger’s extra point with :34 left in regulation. The drive was helped by a controversial pass interference call on a fourth-and-10 at the Panthers’ 27. The penalty gave Penn-Trafford a fresh set of downs, which the Warriors didn’t squander.

Imhotep blew apart in overtime. The Panthers won the overtime toss, and elected to defend. That resulted in Schlessinger’s 24-yard field goal.

That gave the Panthers possession (in high school each team gets the ball at the 10 with four downs to score). First, the Panthers were called for a false start, which pushed the ball back to the 15.

After a Stewart five-yard run, a high snap placed the ball back at the 26. Imhotep, a team known for its potent ground game, couldn’t move — and the celebration began for Penn-Trafford.

For the most part, Imhotep did a good job containing Penn-Trafford’s Wisconsin-bound Cade Yacamelli in the first half, holding the 6-foot, 205-pound senior to 68 yards rushing, but he finished with 100 yards on 21 carries, averaging 4.8 yards a carry.

Imhotep ruled the time of possession, 39 minutes to 18. The Panthers rushed for 219 yards, but they were also penalized 12 times for 81 yards, many of those flags coming on third-and-short.

“At the end of the day, we had a chance to win, and we didn’t execute,” Imhotep coach Devon Johnson said. “It’s heartbreaking. But I’m proud of my guys. They fought all year. I told my team to walk off this field with their heads held high.”