Stallone: 'We will be back' with 'Creed' sequel 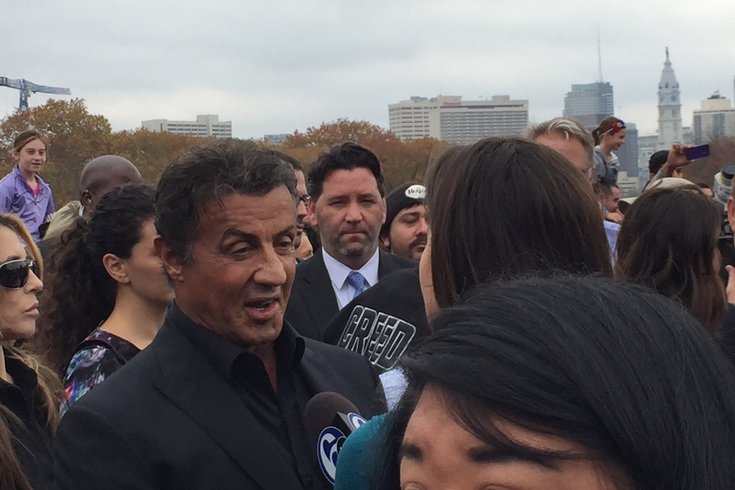 Actor Sylvester Stallone returns to the 'Rocky Steps' outside the Philadelphia Museum of Art for a promotional event regarding the new film 'Creed,' which will be released in theaters on Nov. 25, 2015.

For the purposes of a promotional event involving a decades-old film series that’s focused quite a bit of attention on the city, is it okay to let former Eagles player Vince Papale say, into a microphone, before hundreds of people, that the Philadelphia Museum of Art was “made famous by Rocky?”

After all, he was atop the “Rocky Steps” leading to the stately museum on Friday emceeing a press event to hype “Creed,” the seventh film in the Rocky franchise.

Joining Sylvester Stallone in the film – which, after Thursday night’s local screening, opens in theaters nationwide on Nov. 25 (PG-13) – is Michael B. Jordan (who portrays the late Apollo Creed’s son Adonis), Tessa Thompson (Adonis’ love interest Bianca) and the city itself.

“I took a few real punches, for sure. Thanks, Sly, for that one.”--Michael B. Jordan (Adonis Creed)

That trio joined writer/director Ryan Coogler, producer Irwin Winkler, Mayor Michael Nutter and Papale on a stage atop the steps with the museum itself as a backdrop.

With hundreds of Rocky fans looking on – yes, some yelled “Yo Adrian” – Nutter shared his opinion that the film was Academy Award-worthy, declared both Friday and Nov. 25 as “Creed Day in Philadelphia.”

Nutter labeled the original movie as “the iconic symbol of what can be accomplished if you work for it and try your best.” 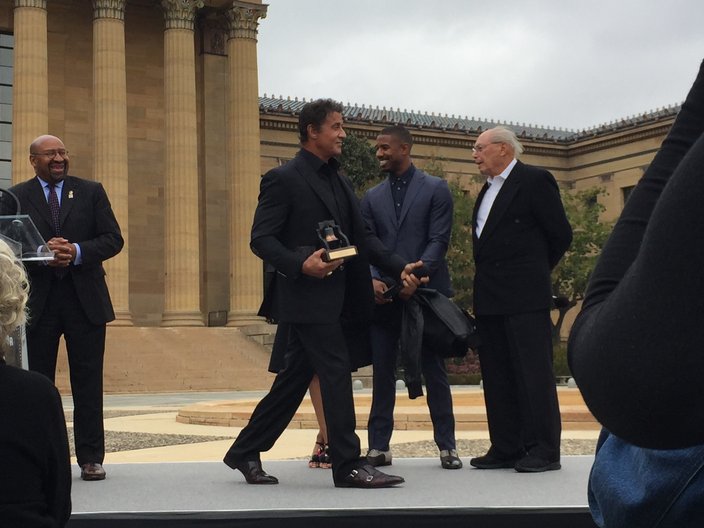 Sylvester Stallone accepts a Liberty Medal award from Mayor Michael Nutter during a promotional event for the latest movie in the Rocky franchise, 'Creed.' (Brian Hickey/PhillyVoice)

“'Creed’ brings the message of ‘Rocky’ to a next generation,” said Nutter, noting that the opening date is “the 40th anniversary of the date of the opening scene in the original ‘Rocky’ film.”

Before heading over to meet some fans, and conduct a group interview with the city skyline as the backdrop, Stallone noted that he’d “like to follow this character until eventually he’s an angel.” Translation: There will be an eighth film in the franchise.

Jordan – known for roles in television shows "The Wire" and "Friday Night Lights," and movies "Fruitvale Station" and "Fantastic Four" – noted that he did get a little banged up from the boxing scenes with Stallone. 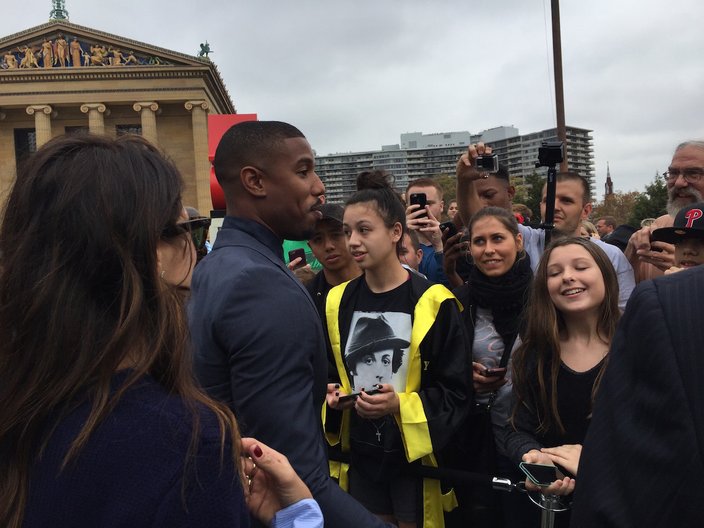 Actor Michael B. Jordan, who portrays the title character in the movie 'Creed,' meets fans at a promotional event atop the 'Rocky Steps' on Friday morning. (Brian Hickey/PhillyVoice)

“When you’re mentally tired and mentally fatigued, it’s very easy to make subtle mistakes, and when you make mistakes in the boxing ring, that can be the difference between knocked out or finishing the fight,” said Jordan, noting that he started training with real boxers, and adjusted his diet, well before filming commenced. “I took a few real punches, for sure. Thanks, Sly, for that one.”

To which Stallone responded with a wry smirk, “He deserved it.”

Stallone then noted that “Rocky’s story has been pretty much documented,” so fans should expect a continuation of the Creed narrative into the future.

“We will be back,” he told the crowd. 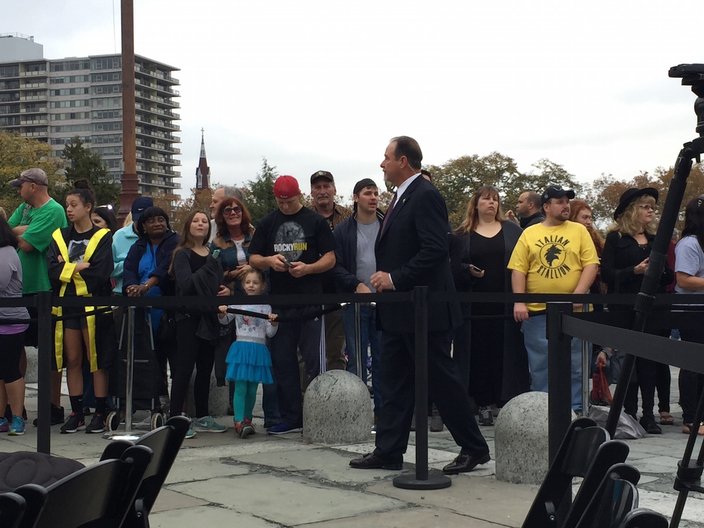 Fans of the 'Rocky' film franchise, like Brian Almond (yellow shirt), gathered outside the Philadelphia Museum of Art for a chance to meet the stars of the latest installment 'Creed,' which will be released in theaters on Nov. 25. (Brian Hickey/PhillyVoice)

That was welcomed news to fans like Brian Almond, a 38-year-old born and raised in Northeast Philadelphia.

Almond arrived early to watch the press event, sporting a yellow “Italian Stallion” T-shirt. The depth of his fandom is best explained by saying he still has both DVD and VHS copies of all the Rocky movies.

“I’m just a diehard fan,” he explained. “The fact that he’s an underdog with his back against the wall, his character epitomizes the city of Philadelphia.”