Pennsylvania state trooper shot along I-676 in Philadelphia 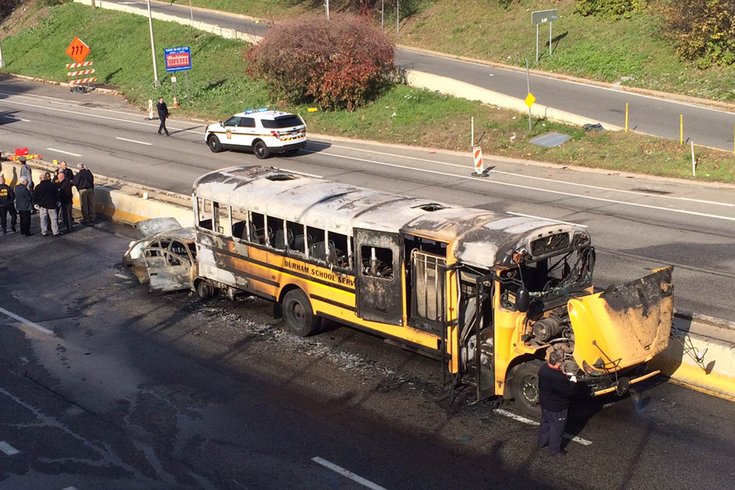 A burned-out bus and the car that hit it in the rear sit in the aftermath of this morning's crash and highway shootout on the Vine Street Expressway at 21st Street in Center City.

The juvenile who allegedly shot a Pennsylvania state trooper following a car chase on I-676 in Center City on Tuesday morning is in police custody.

The incident occurred around 9:45 a.m. on eastbound I-676 in the area of 22nd Street, according to Capt. James K. Raykovitz, commanding officer of the state police barracks in Philadelphia.

"We have the shooter," Raykovitz said Monday afternoon.

Speaking at a pair of afternoon press conferences, Raykovitz said the incident started after state police pulled over a car with the shooting suspect and three other passengers for an expired registration. The car stop took place on the Schuylkill Expressway, near the University City exit, Raykovitz said.

According to Raykovitz, the occupants of the vehicle had been removed and one person placed in handcuffs, when the alleged shooter, whose name has not been released by police, jumped back in the sedan and took off, headed west on the Schuylkill, then east on Vine Street Expressway.

Trooper Patrick Casey, 31, who had been called to the scene as back-up, chased after the juvenile in his police cruiser. At one point during the pursuit, Casey attempted to maneuver his vehicle to try to box in the driver's car.

"As he [Casey] was passing to do that, that's when he took fire," Raykovitz said. 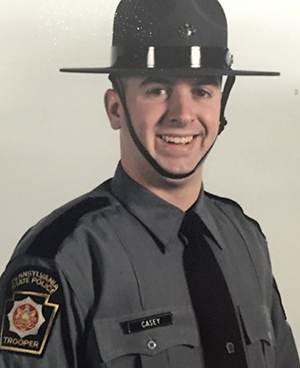 Casey (pictured left) returned fire from inside his vehicle, discharging his weapon through the windshield, according to Raykovitz. Two other officers responding to the scene also returned fire.

"I respect and admire the way Trooper Casey responded to being shot at," Raykovitz said. "You don't have to be outside the vehicle to return fire. I'm not part of the investigation, but I believe he performed heroically to respond with fire from inside the vehicle."

Casey sustained a gunshot wound to his shoulder during the exchange. The alleged shooter was captured after he tried to run westbound on I-676 following the shooting, Raykovitz said. The juvenile was not hurt when he was apprehended. His firearm was recovered by police.

Raykovitz said that the injury appeared to be a "flesh wound," although a bullet remains lodged in his shoulder. Casey will not need surgery at this time, and could be discharged from the hospital as early as Wednesday, Raykovitz said.

Police did not identify any of the suspects and initially refused to provide physical descriptions of them. While two, including the shooter, are in police custody, Raykovitz said a third suspect has been identified and is being sought. An investigation is ongoing to determine the identity of the fourth wanted individual. 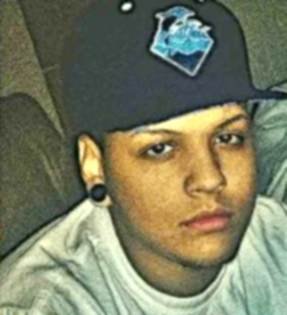 The third suspect (pictured left) later was described as a Hispanic male, 18-22, standing between 5'6 and 5'8, according to 6ABC.com. The suspect, last seen wearing a dark blue hat with a white star, has facial hair on his chin and a dark cast on his right arm. He has a tattoo sleeve on his left arm.

Raykovitz said he expected the shooter will be charged with attempted homicide.

State police declined to say if Casey had been wearing a bullet-proof vest at the time.

Casey graduated from the Pennsylvania State Police Academy in 2009, and he since has been stationed at the Belmont barracks in Philadelphia, according to state police.

Outside the hospital earlier Tuesday afternoon, Mayor Michael Nutter said, “The most important thing is the trooper is in stable condition,” and he described the Vine Street Expressway as a “crime scene because of what took place there."

Jenny Cole, who lives near I-676, saw a dark plume of smoke emanating from the highway as she walked outside Tuesday morning.

"I was just walking out to get coffee," said Cole. "I saw the big cloud of smoke. It was huge."

Cole did not see the altercation between the trooper and the shooter. But she saw the aftermath – a flaming bus and sedan wedged underneath its tail end.

"I heard there were no kids on the bus," Cole said. That made me feel better." 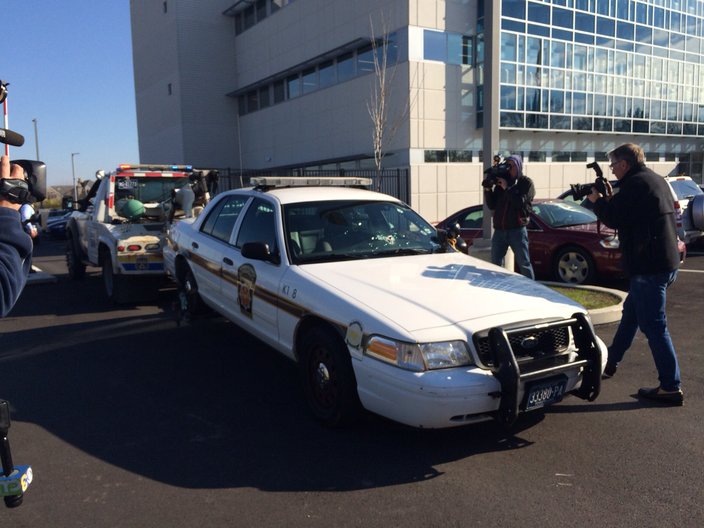 Gov. Tom Wolf released the following statement:
“My thoughts and prayers are with the Pennsylvania State Police Trooper shot on Interstate 676 in the line of duty today. I received an update from Acting Commissioner Blocker a short time ago and I am relieved to learn that the Trooper is in stable condition at a hospital in Philadelphia. Our men and women in law enforcement put their lives on the line each day to protect us, and we owe them a debt of gratitude. The shooter was swiftly taken into custody by the Pennsylvania State Police. No further details are available at this time.”

Thoughts & prayers are with @PAStatePolice trooper shot in the line of duty today in Phila. Relieved trooper is in stable condition. -TW

The Philadelphia Fire Department responded to the scene to extinguish the blaze.

The windshield of the police car had what appeared to be several bullet holes. A handgun was laying in the ground behind the police car. Police had also marked off a number of bullet casings and other evidence.

The inside of the suspects' car was completely charred by the fire, as was most of the bus.

The bus involved in the crash belongs to Durham School Services, a national transportation company based in Illinois that serves the Philadelphia area.

Molly Hart, a spokeswoman for the company, confirmed the bus driver was not injured in the crash, and she said Durham School Services would not be releasing any information about the driver.

State police said the bus driver is a witness in their investigation.