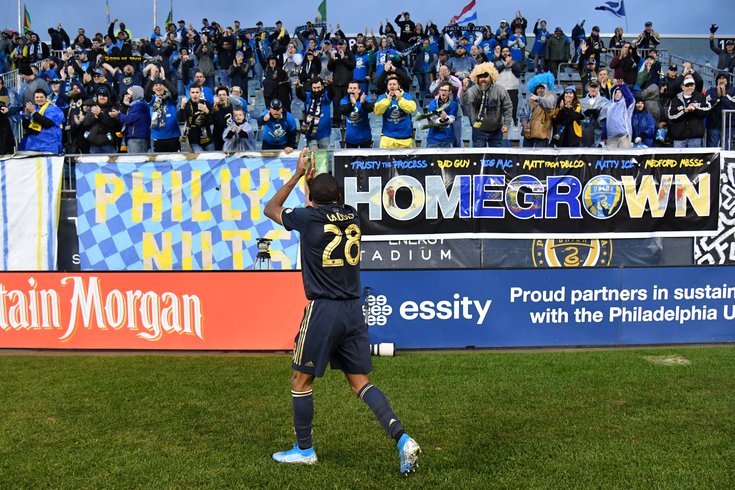 The Union continue their trek for the MLS Cup.

In the immediate afterglow of the first playoff win in club history, Union coach Jim Curtin gleefully rehashed a painful story from his playing days to make a meaningful point.

He talked about when the L.A. Galaxy’s Alexi Lalas scored the game-winning goal in extra time in the semifinals of the 2001 Lamar Hunt U.S. Open Cup against Curtin’s Chicago Fire. Following the goal, Lalas ran up a hill, which was covered knee-high in shrubs, behind the team benches at Cal State Fullerton’s Titan Stadium, and raised his hands in triumph before getting mobbed by his teammates.

The goal, and especially the celebration, instantly became a legendary moment for the storied franchise.

Curtin, who is in his sixth year patrolling the sidelines for the Union and has been with the organization since its inaugural season in 2010, felt his team lacked that kind of iconic moment.

Well, that is, until Sunday afternoon.

The Union overcame a two-goal deficit at halftime to record an unlikely and thrilling 4-3 victory in extra time over the New York Red Bulls at rain-drenched Talen Energy Stadium in an Eastern Conference quarterfinal game. It was the first playoff win in the Union’s history in four previous appearances.

Marco Fabian, who was inserted into the game just a few minutes prior, put the Union ahead in the 105th minute with a goal on a chip shot into the far corner of the net to send the sellout crowd of more than 18,000 into an absolute frenzy.

Fabian’s goal, and the team’s eventual win, was that signature win the Union, and Curtin, have been seeking for the last 10 years.

“We have not had a game in our history, like the one where Lalas scored, where it jumps off the page and everyone feels it,” Curtin said. “In my mind, that is how special tonight was for our club. That is something that we have not had yet, but now we have it.

“Everyone is going to remember this game.”

The Union hosted their first playoff game since 2011 and amped up crowd during pre-game introductions.

However, the Red Bulls quickly spoiled the party with a goal six minutes into the game and then silenced the crowd with another in the 24th minute for a 2-0 advantage. Union captain Alejandro Bedoya woke them up as he cut the deficit in half with a tally in the 30th minute, but New York answered with a back-breaking goal just before halftime for a 3-1 lead.

While it deflated the crowd, it apparently did not phase the players inside the Union locker room.

“With that goal before the half, we didn’t think it was the nail in our coffin,” defender Jack Elliott said. “I think (our whole team) thought we were going to win the game – that was our belief. We had the momentum right from the start (in the second half), we used it and we used the crowd and we came out and just gave everything.”

Elliott kick-started the comeback with a goal in the 52nd minute to make it 3-2. Then, Fafa Picault found the back of the net on a rebound headball off the crossbar in the 78th minute to knot things up at 3-all.

Enter Fabian and his heroics.

Signed to a hefty contract last winter, the Mexican star has had a mostly disappointing first season with the Union. He did not even start against the Red Bulls and was inserted into the game in the 103rd minute.

However, he provided the most monumental goal in team history, which kicked off a party at Talen and shed the 10,000-pound monkey off an entire organization’s back.

“This means a lot for everybody,” Bedoya said. “We knew about and we talked about how we could cement ourselves in Philadelphia Union history to get the first playoff win. So we are all excited about that.”

The Union can continue to add more memorable moments on Thursday, when they travel to face MLS defending champion Atlanta in the conference semifinals.

Regardless of the outcome, the Union players, coaching staff and fans will always have Sunday afternoon.

“The image I will take away from this night is the excitement of guys when the final whistle blew,” Curtin said. “It was their excitement that we finally did it. And the stadium was as loud as I can ever remember, and that is something I will remember forever for sure.

“It was special and big win for the club, but we have more to accomplish.”