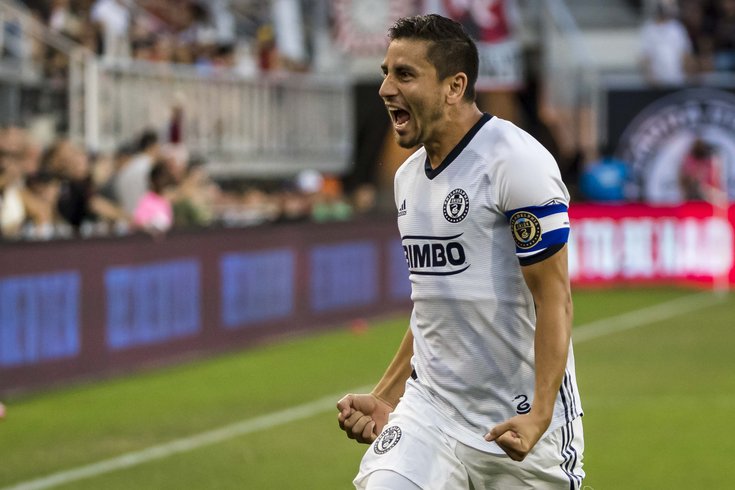 Philadelphia Union midfielder Alejandro Bedoya celebrates after scoring a goal against the D.C. United at Audi Field. After celebrating with his teammates he grabbed an on-field microphone and shouted, "Hey Congress, do something now! End gun violence! Let's go!"

Philadelphia Union midfielder Alejandro Bedoya celebrated his goal Sunday night by getting political and calling for Congress to "end gun violence" into an on-field microphone.

Bedoya, 32, celebrated with his teammates after scoring a goal and helping to secure a 5-1 win against D.C. United at Audi Field, but as his teammates dispersed he ran in the opposite direction to the nearest on-field television microphone. He then picked up the mic and shouted, "Hey Congress, do something now! End gun violence! Let's go!"

His call to action came only a day after a shooter opened fire in a shopping center complex in El Paso, Texas, killing 20 people and injuring 26 people. Less than 24 hours later, nine people were killed and 27 people were injured by an active shooter in downtown Dayton, Ohio. The El Paso killing spree ranks as one of the deadliest mass shootings in American history.

Prior to the game, Bedoya tweeted on Sunday night, "Seeing more thoughts and prayers bulls—t. Words without actions are just worthless. America, it seems, is becoming a dystopian society. Do something!!! Enough!!!"

Seeing more thoughts and prayers bullshit.
Words without actions are just worthless. America, it seems, is becoming a dystopian society.
Do something!!! Enough!!!

This isn't the midfielder's first time speaking out against gun violence. Bedoya grew up in Weston, Florida, minutes away from neighboring Parkland, where 17 students were killed in a 2018 mass shooting at Marjory Stoneman Douglas High School. Following the shooting, he wore a "MSD Strong" shirt under his jersey.

"A lot of people will tell me now and tell Ale to stick to sports and all the stupid lines that come up, but it's crazy," Curtain said to ESPN. "It's crazy in our country right now, and I think it needs to change, as well."