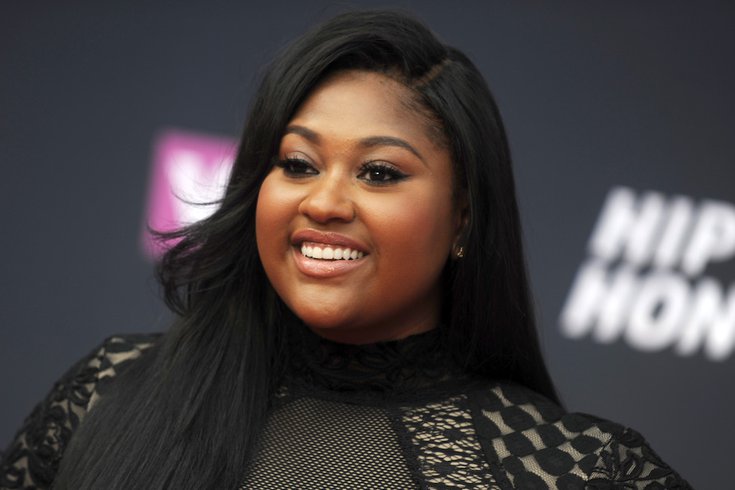 Philly-native Jazmine Sullivan, pictured above, will sing the national anthem at Super Bowl LV, in a duet with country singer Eric Church.

Philadelphia's own Jazmine Sullivan will take to the field to sing the national anthem at Super Bowl LV on Feb. 7.

The R&B artist will join country singer Eric Church for a special rendition of "The Star-Spangled Banner" before kick off of the big game between the Kansas City Chiefs and the Tampa Bay Buccaneers at the Raymond James Stadium in Tampa, Florida.

The 33-year-old Philly native is best known for her 2008 hit "Bust Your Windows" and is also hot off the release of her critically acclaimed 2021 album "Heaux Tales" which debuted at No. 4 on Billboard's Top 200 Albums chart.

Church, a North Carolina native, is known for chart-topping country songs like "Drink in My Hand," "Talladega," "Record Year," and "Springsteen." The 43-year-old musician is a 10-time Grammy award nominee.

Sullivan was born and raised in Philadelphia and is a graduate of the city's High School for the Creative and Performing Arts. Earlier this month, her new EP "Heaux Tales" was released and quickly garnered millions of Spotify plays and praise from music critics, who celebrated her first record since 2015's "Reality Show."

A New York Times music critic wrote that Sullivan’s music "carries the churchy, high-stakes emotionality and down-to-earth detail of vintage Southern soul into the everyday situations and electronic soundscapes of hip-hop," and about album's title, "Heaux' is a Frenchified version of 'ho,' placing a longtime insult at an analytical distance. In the songs on 'Heaux Tales,' Sullivan looks behind dismissive stereotypes — party girl, avenger, sex addict, gold digger, cheater, castoff — to show complicated human longings behind them."

The album's tracks "Pick Up Your Feelings" and "Lost One," had racked up 5 million and 9 million Spotify plays, respectively, not long after "Heaux Tales" release.

And in the last month, Sullivan has been featured on NPR's "Tiny Desk (Home) Concert" and performed on "The Tonight Show with Jimmy Fallon."

At Super Bowl LV, Sullivan and Church will sing the national anthem ahead of the game's kickoff at 6:30 p.m.. They will be performing an arrangement specifically made for the game.

The two artists have never performed together, according to Vulture, and they will be the first duet to sing the national anthem at the Super Bowl since Aaron Neville and Aretha Franklin sang before Super Bowl XL in 2006.

Musician H.E.R., a collaborator of Sullivan's, will sing "America the Beautiful" during the CBS pregame show. The two-time Grammy winner and 23-year-old musician, also known as Gabriella Sarmiento Wilson, performed on Sullivan's track "Girl Like Me."

"The Star-Spangled Banner" and "America the Beautiful" will be accompanied by American Sign Language translations from deaf rapper Warren Snipe, whose nickname is actually "WAWA," the NFL said.

The Weeknd is the Super Bowl halftime show performer, which the NFL revealed in November. At the 2020 Super Bowl, Shakira and Jennifer Lopez performed together as the game's halftime act. The Canadian singer born artist, whose real name is Abel Makkonen Tesfaye, is expected to perform his most recent hit "Blinding Lights," as hinted at by the Pepsi preview advertisement below.

Miley Cyrus will appear during the pregame festivities, at a new event called the "Tik Tok Tailgate" featuring famous users of the short-form video social-media platform, surprise performances and cooking segments, according to Variety. The show begins at 2:30 p.m. and be streamed in full on TikTok.

Super Bowl LV is taking place under continued health and safety guidelines implemented by the NFL in light of COVID-19. There will still be some spectators in the stands: Around 22,000 people will be admitted into the Tampa stadium, and 7,500 of them are vaccinated health care workers who've been given free tickets to game by the NFL.

The 2021 Super Bowl also marks the first time one of the competing teams will play at their own stadium, with the Buccaneers at home.