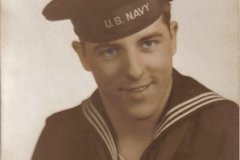 Joseph Pauro's first assignment as a U.S. Navy gunner was aboard an ammo supply ship which was sunk in the Maldives Islands, near Ceylon.

When South Jersey resident Joseph F. Pauro’s mother reluctantly allowed him at age 17 to join the U.S. Navy in the early days of World War II, she worried she had signed his death warrant.

She nearly did just that.

Pauro, now 90, was torpedoed twice. And attacked by a kamikaze pilot. On Wednesday night, his service to the country will be honored at a Camden County Freeholder’s community forum .

A gunner’s mate assigned to protect merchant marine supply ships, Pauro’s first vessel was torpedoed by a Japanese submarine and sank in the Indian Ocean.

Pauro’s remarkable survival is detailed in a diary he kept to recount the 117,249 miles he traveled in more than three years and 10 months of U.S.service.

I was on the bridge at the time when the torpedo hit, somewhere up forward on the port side, I froze in my tracks. The flame shot up on both sides of me. I was behind the stack at the time.

The ship was listing port fast and in the cargo holds forward was a supply of ammunition. It was continually exploding!!!

The gunnery officer was on the starboard wing of the bridge. He came running up on the flying bridge where I was, he looked at me and didn’t say a word.

His eyes looked as big as saucers and he was too scared or shocked to say anything.

In a very few seconds, we were both running aft over the catwalk, which was built on top of the cargo, by this time the bridge was well on fire.

Burned, he jumped overboard as fire scorched the listing ship, which finally disappeared into the sea three hours after taking the hit.

I could see the ship quite a distance from me now. It was burning like hell!! The metal seemed to be screaming as it twisted and fell. There was a series of explosions and the night seemed as though it was day! I could hear the cries of men, some screaming with agony and pain, some yelling, “Oh help me God!!

He and fellow survivors, clinging to flotsam from the sinking liberty ship S.S. Henry Knox, bobbed along – alone in the vastness, save for two Japanese subs sweeping the area.

A day passed before a lifeboat from the torpedoed ship came upon them. He and two fellow survivors were pulled aboard – just in time.

The shark had its mouth wide open and we looked eye to eye at each other. In a few seconds, he closed his mouth and wiggled back into the ocean.

In all, Pauro and his fellow survivors were adrift for nine days before landing on one of the Maldive Islands.

After recovery and leave, Pauro boarded another supply ship.

This time, his vessel was attacked by a kamikaze pilot – and then torpedoed, all during the same mission.

The plane was in before we could do any good. The men on the 20mm machine guns were making direct hits on him. The next thing we realized that the Jap was coming for a suicide hit and he was aiming the plane straight for our bridge.

We could see the two zeros on his wings and his machine guns were wide open. He was making holes around the stack. The Captain saw the plane coming in and gave us orders “Hard Right!” and as the ship was turning, the Jap plane missed our bridge by about five feet.

It plunged into No.2 Cargo Hold forward. This had little cargo in it and the ship shook. The ship was on fire, but soon under control and put out.

The ship was listing port as we had a few holes below the waterline. The holes were soon patched and the ship was on equal balance once more. Soon the action was over.

Soon there wasn't even one Japanese plane remaining in the sky, with them shot down or making suicide dives in the U.S. ships.

Our ship was full of shrapnel and holes. We also had one plane come over releasing a torpedo, just missing the stern. We watched it go by!

But the next torpedo slammed his ship.

A couple of the gunners opened up with their machine guns, but they were probably missing by far as they were judging where he was. The plane zoomed over! It seemed as though he was only 30 feet above the bridge, then there was a terrific explosion!!

He made a direct hit with his torpedo, hitting on the port side, just forward of the bridge. The ship shook and it seemed as though it was raining for the salt water from the torpedo hitting, leaving a hole big enough to drive a freight car through.

It caused a suction and the water came up through the hold and was just like a fountain.

The ship started to give a port list and was sinking.

The Captain tried to put it on the beach, but we sunk on top of the reefs in just about a 1/2 hour after we were hit. Most of the ship stayed out of the water and the cargo we had was safe. Not one man was hurt!

The Camden County Freeholder Board will honor him as “a source of pride for all of us.”

On Wednesday morning, he said he was “a little nervous,” having last spoken about his experiences years ago before a veterans’ group.

Pauro had what would now be diagnosed as PTSD when he made it home to Pennsauken after his service.

His mom’s alarm clock once caused him to leap out of bed and shout out “General Quarters!” the alert call for an incoming attack.

Over time, his symptoms eased, though he remained prone to night terrors.

He eventually landed a job as a printer and later worked assisting at funerals until he was 84-year-old. "We came home, we went to work," he said of how his generation coped.

He takes talking about his experiences as a serious duty.

“I want people to know what it was like to be in a war,” he explained.