Reward may be offered for information leading to suspect's arrest 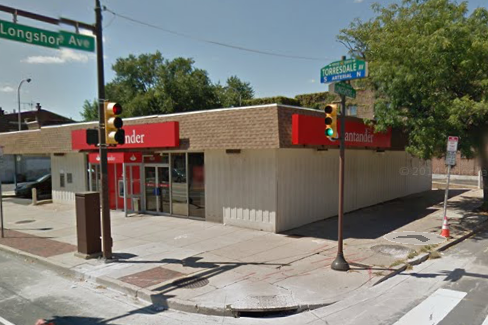 Philadelphia police are seeking an armed suspect after a branch of Santander Bank was robbed Wednesday afternoon in Northeast Philadelphia, federal officials said.

According to authorities, the robbery occurred around 3:37 p.m. at the Santander location at 6836 Torresdale Avenue, BNO news reported.

Investigators say the suspect delivered a demand note to one of the tellers and received an undisclosed amount of cash before fleeing north on Torresdale Avenue.

The suspect is described as a white male in his late 20s or early 30s, about 5'6'' to 5'7'' tall with a thin build and a mustache. At the time of the robbery, he wore a Nike shirt bearing a tiger's face, dark pants and a white Eagles hat.

Officials with the FBI's Philadelphia Field Office said the suspect is considered armed and dangerous.

A reward may be offered for information leading to the suspect's arrest.